The 3rd stage of the Giro d'Italia serves the first high altitude finish. At 150 kilometres, the race leads from Enna to a finish climb of 18.2 kilometres at 6.8% on the slopes of Mount Etna. 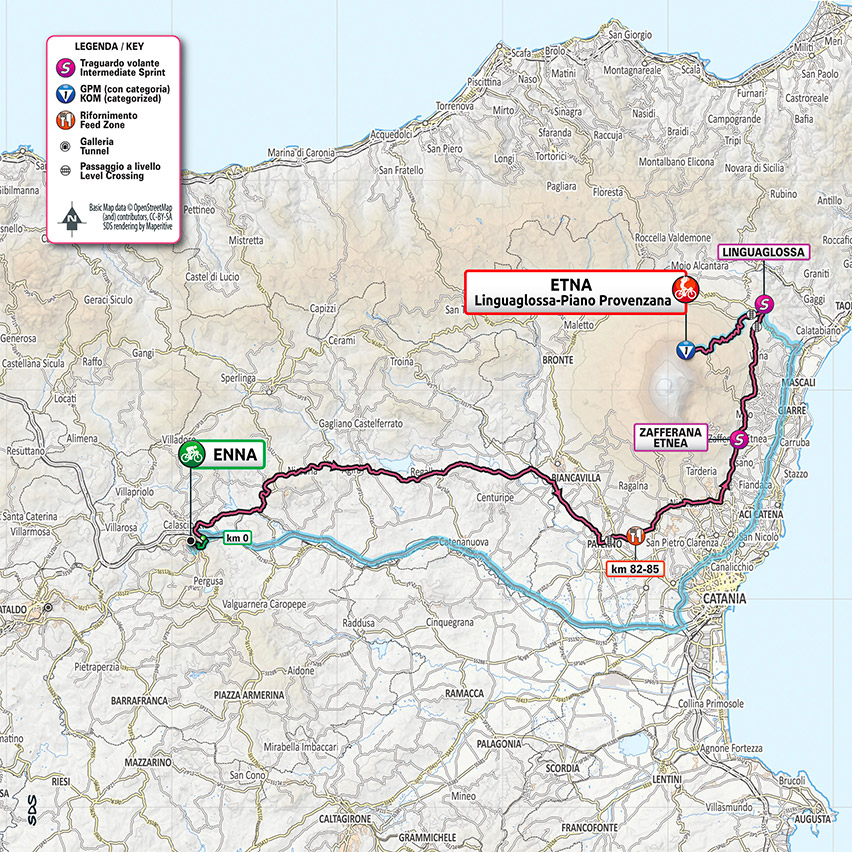 This start town of Enna is in the middle of the island, and heads east through a sequence of shallow climbs and descents, rarely surpassing 5%, heading towards the highest active volcano in (geographical) Europe. None of these climbs are categorized. The route serves more gradual climbs in the second half. 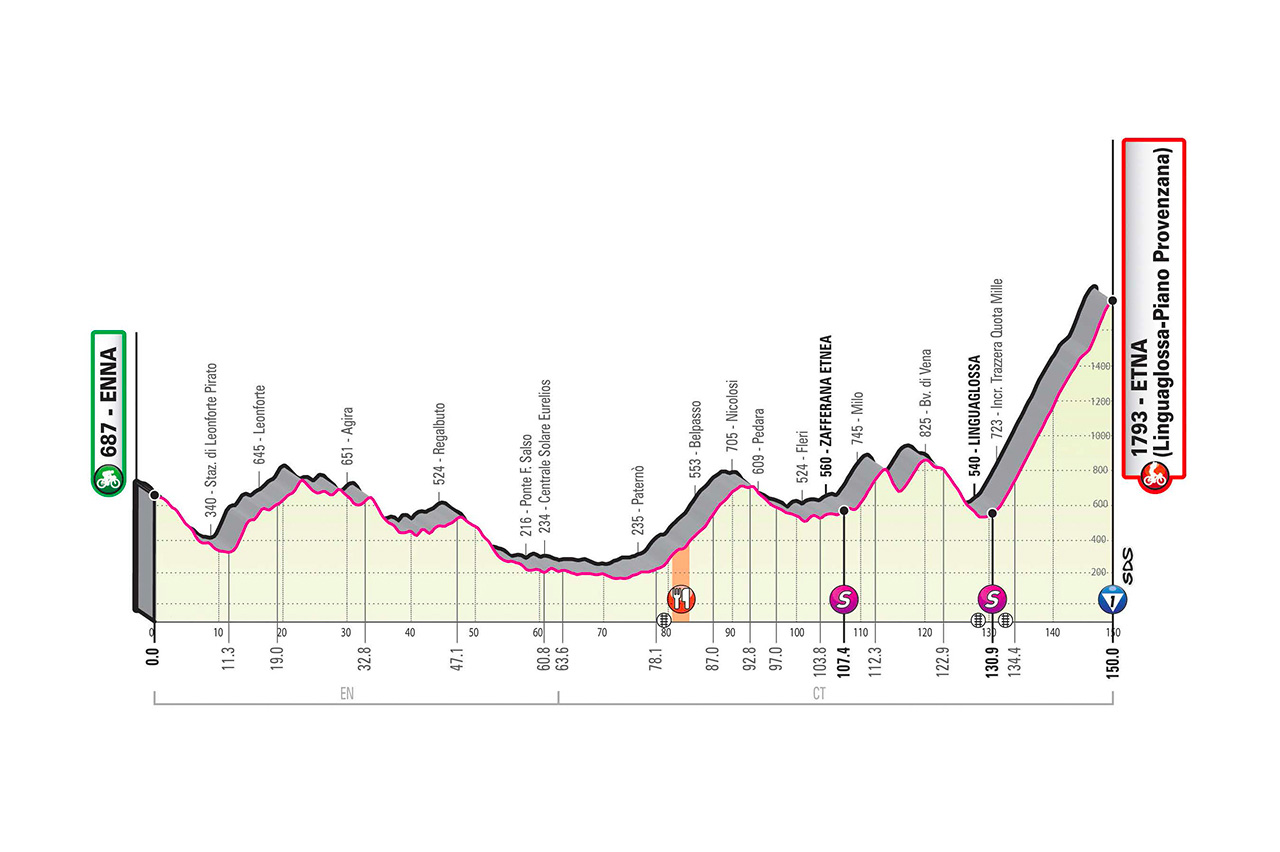 The black ashen slopes of Mount Etna form the backdrop for a Giro finish for the sixth time, but this year’s ascent from Linguaglossa is unprecedented. The 18.2 kilometres climb at 6.8% serves double digit gradients in the last 3 kilometres. 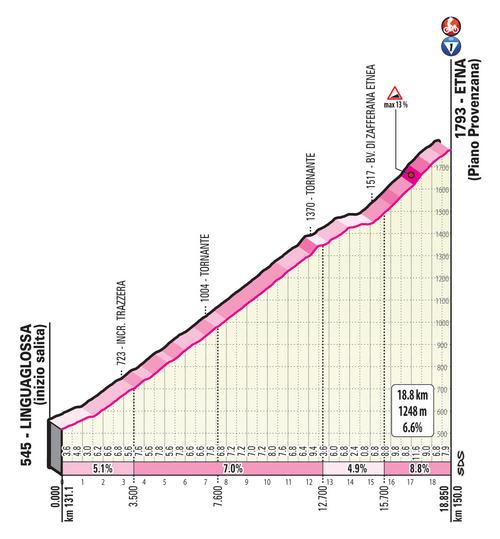 A very regular climb at 7% in the first two thirds, followed then by an easier and then a harder section. 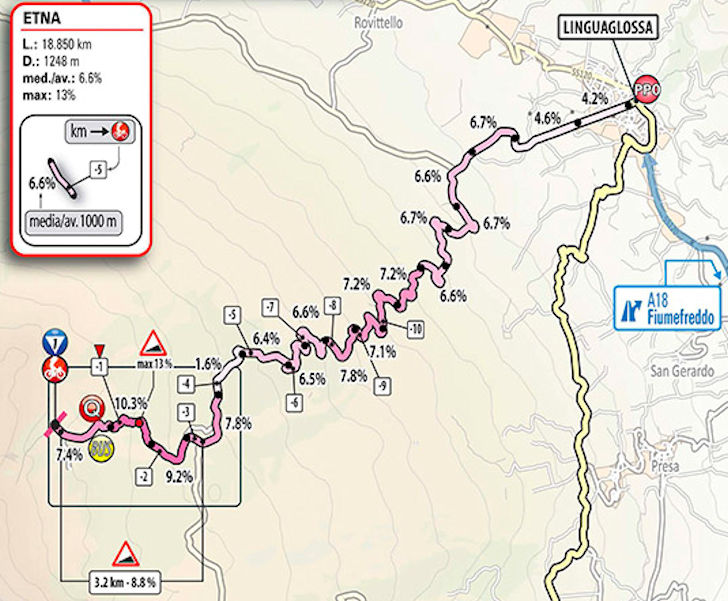 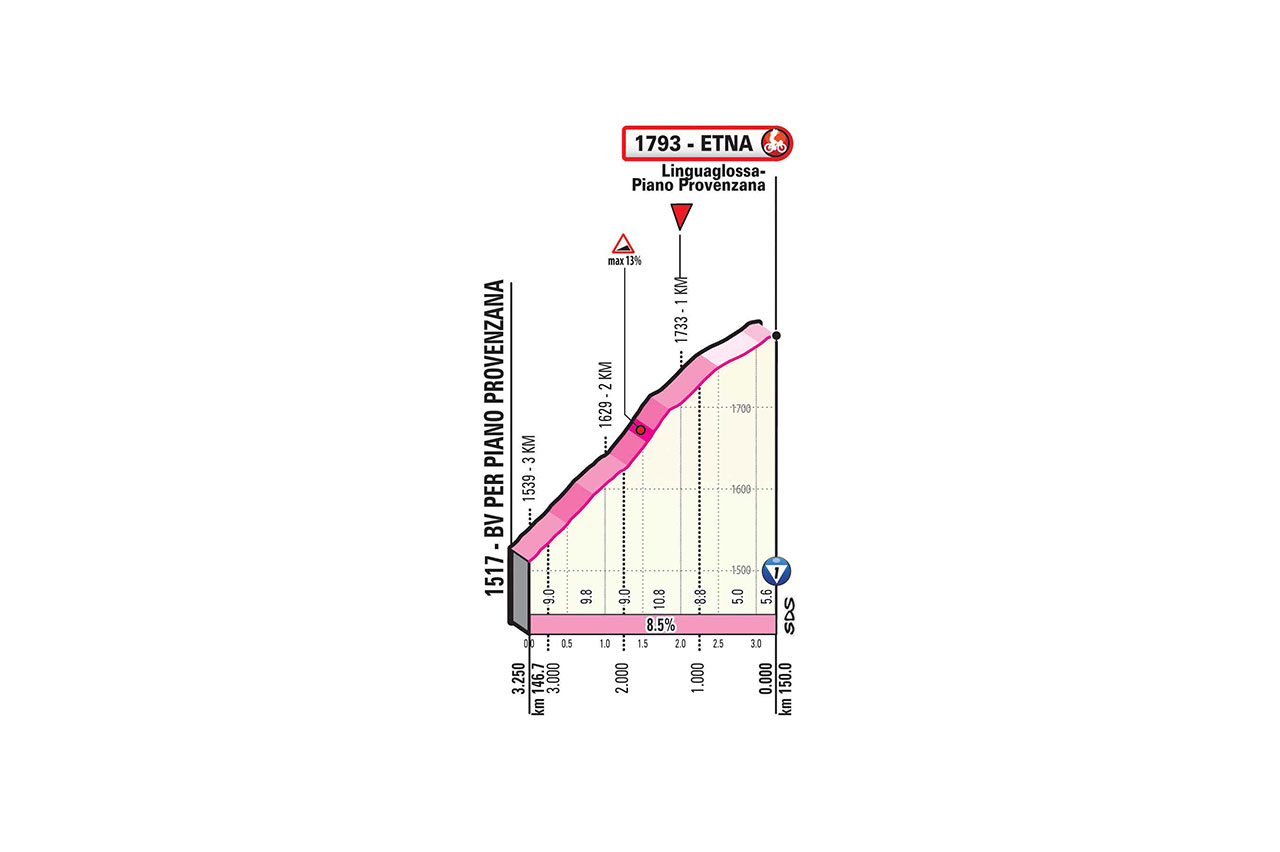 Undoubtedly, the GC riders will go head-to-head on Mount Etna. But will it be for the stage honours or to put time into their rivals with the winner coming from the breakaway?
The last Giro stage on the Etna had a little bit of both. Esteban Chaves and Giulio Ciccone were the remaining breakaway riders in the last 5 kilometres. The Colombian left his Italian companion behind, while his team mate Simon Yates attacked in the GC group. He surged across to Chaves and the two came together in the final kilometre. Stage win for Chaves, pink jersey for Yates.

Enna is known as the highest Regional County Seat in Italy, between 900 and 990 metres high. It was called by Romans Urbs Inexpugnabilis because it was unassailable, Sicily Midpoint because it is in the centre of the island, and Sicily Overlook for the panoramic views. Sheltered on this upland, Enna offers a breath-taking postcard, given by a territorial shape almost unique in the world, due to the lack of mountain chains nearby, high enough to blind the view. It was a fortress for the past three millenniums for peoples like Greeks, Romans, Byzantines, Arabians, Normans, Suevians and Aragoneses. Enna is a city full of history and it can praise a monumental heritage among the biggest in the Region.

Lombardia Castle represents the architectural symbol of the city. For almost half a century it had been home of the city opera theatre and it was described as ‘The nearest Theatre to Stars’. 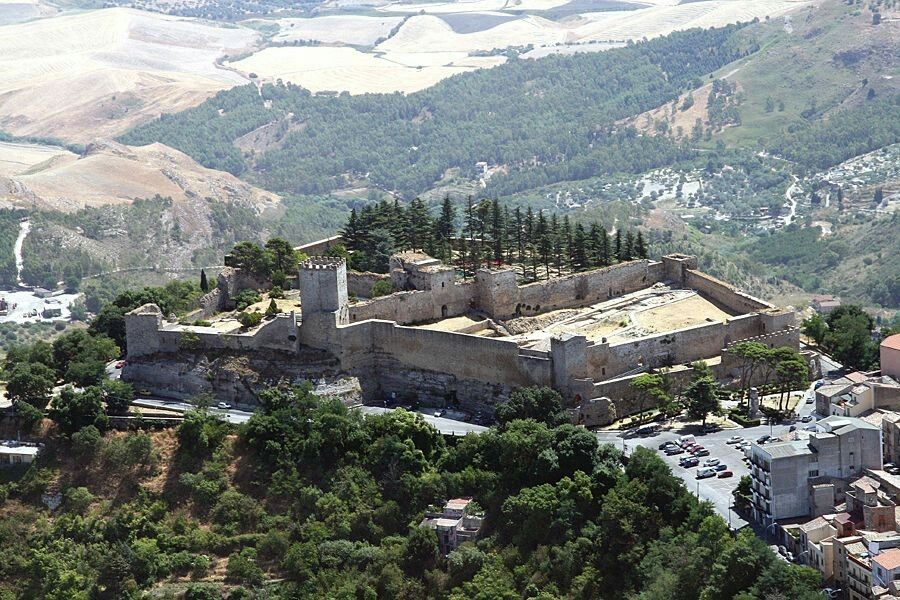 Linguaglossa is located 44 Km far from Catania, 550 m a.s.l.
It is a typical Etnean village with streets and portals in lava stone, ancient buildings and multiple alleys adorned with murals.
In the past, Linguaglossa was linked to the production and transport of the big pines of Etna, whose wood and resin have been indispensable materials over the centuries.
An historian of the 16th century affirmed that Linguaglossa have been fonded by a group of Genoese and Lombard artisans based in Castiglione. 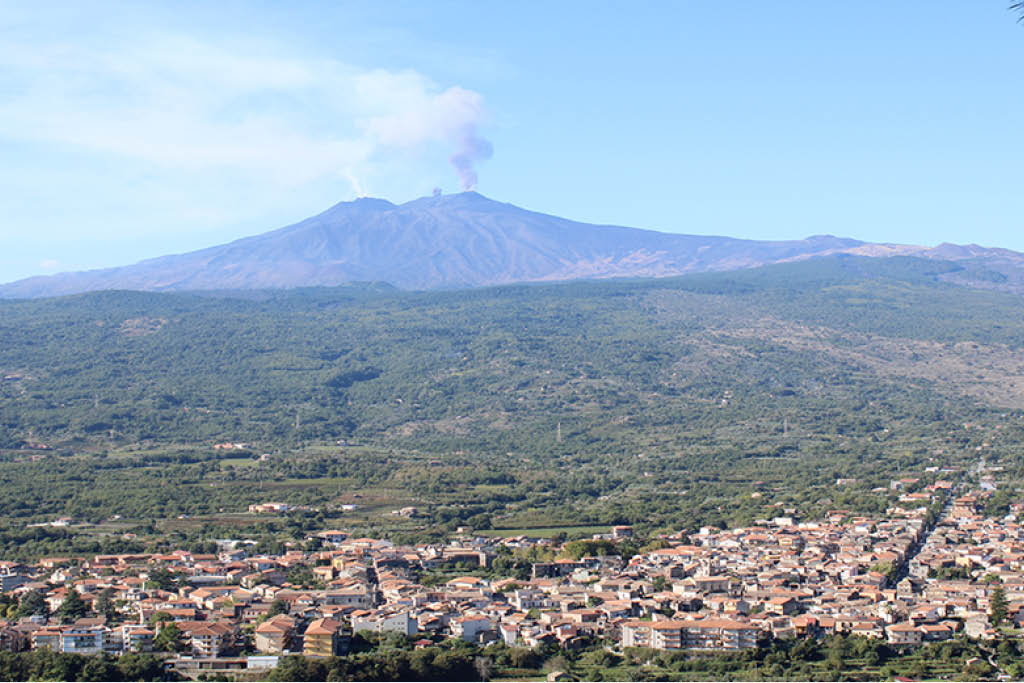 The product par excellence of Linguaglossa is undoubtedly “Salsiccia al ceppo”, pork meat cut by hand in small pieces, with the typical knife called “partituri”, and processed and stuffed on an oak stump, tree of the Etnean area.
It is flavored with the addition of salt, pepper and the typical wild fennel seeds, to be finally stuffed into natural casings. Its typical knot shape is given by the use of a string which is removed before eating.

The wines of the area are also very famous, such as: Nerello Mascalese, Nerello Cappuccio, Nero d’Avola, Carricante, Catarratto and Minnella.

Near Linguaglossa there are numerous wineries that produce “DOC Etna” wines of excellent quality and several oil mills that produce extra virgin olive oil typical of the area. 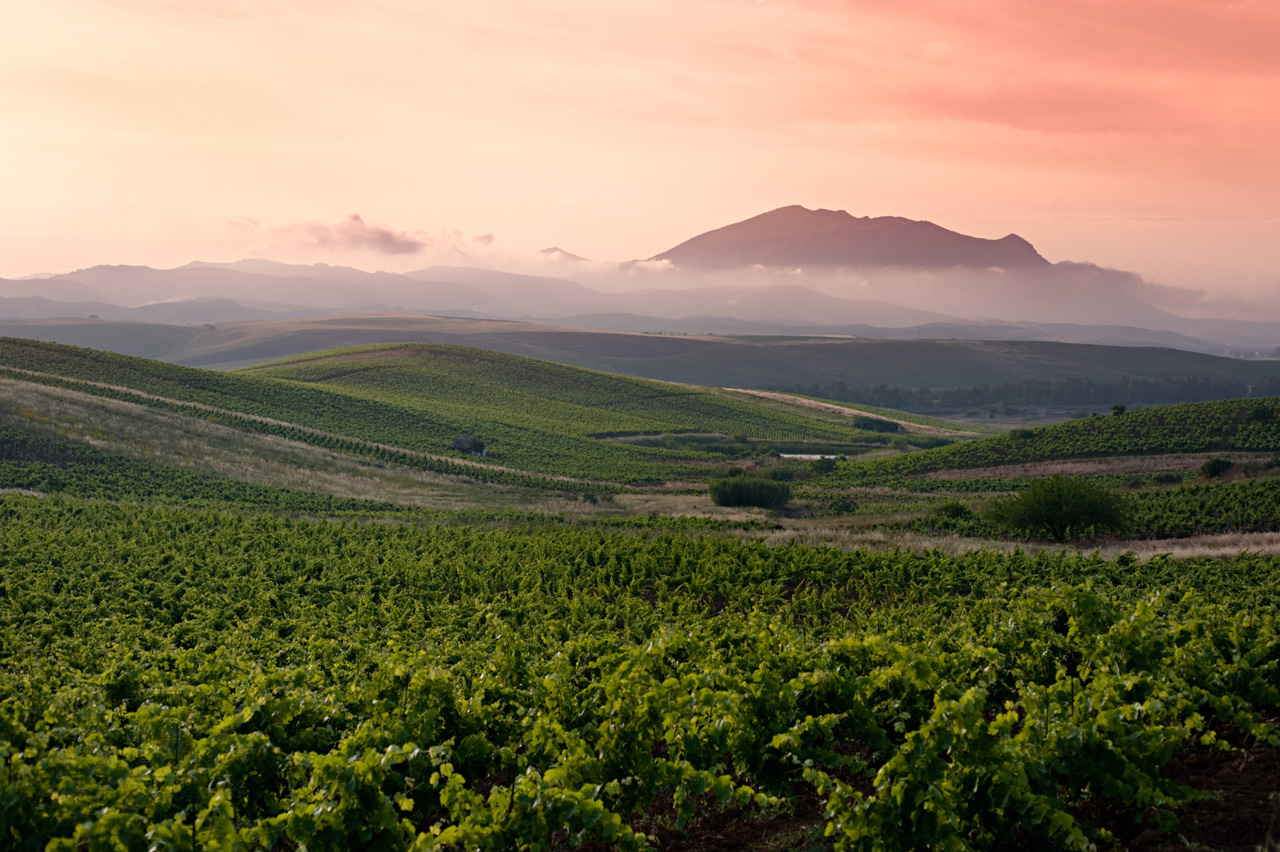 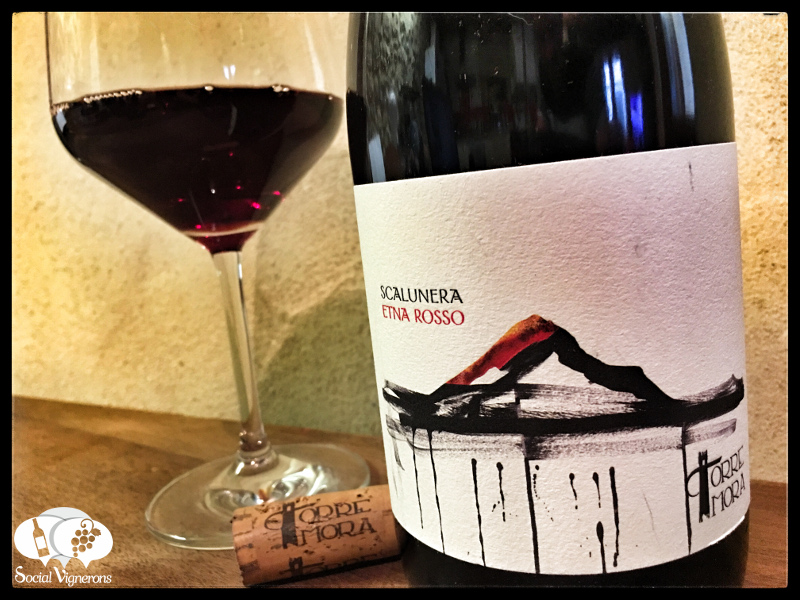