Stage 20 on the Tour de France is explosive material. Merely 130 kilometres long and featuring 4,450 vertical metres, the route runs from Albertville to a summit finish in Val Thorens. Albertville hosted four stage starts – in the Tour de Frances of 1998, 2012, 2016 and 2018. Last year’s stage traveled to La Rosière and was won by Geraint Thomas ahead of Tom Dumoulin and Chris Froome. So the final GC podium in Paris. 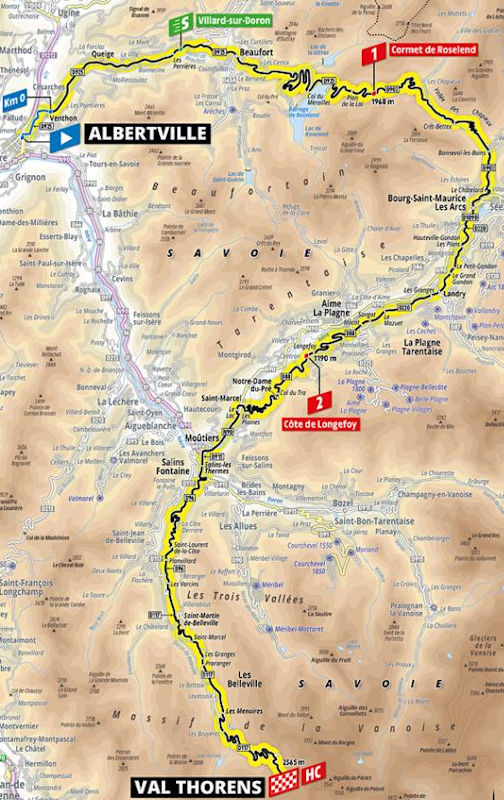 The long 33.4km climb to Val Thorens has only been used once before, in 1994, on that day Nelson Rodriguez of Colombia won, the climb is not so steep, but is very long. There are two climbs before the monster to Val Thorens; the Cormet de Roseland (1,968m) and the Côte de Longfoy (1,190).

The opener is flat, but it doesn’t take long for the road to point upward. Shallow gradients at first but then it kicks up until the riders reach the Cormet de Roselend at kilometre 36. The ascent is a proper way to get into the groove of the last mountain stage of this year’s Tour de France, as it climbs for 19.9 kilometres at 6.6%.

The route descends to Bourg-Saint-Maurice Les Arcs and after a flat section of some 10 kilometres the Côte de Longefoy appears – 6.6 kilometres at 6.5%. At kilometre 77 the summit is reached, but the downhill starts 4 kilometres later.

A short section in the valley leads to the last climb of the 2019 Tour de France. The road starts to rise in Moûtiers and continues to do so for quite a while. The Val Thorens climb is 33.4 kilometres at 5.5%, although that statistic is biased by a number of downhills on the way to Europe’s highest ski resort (2,365 metres). The steepest kilometre slopes at 9.1% and is located 5 kilometres before the finish.
Val Thorens high altitude finish was included only once. In 1994, Colombian Nelson Rodriguez climbed to victory on the hors catégorie slopes.

The 20th stage is the last chance for GC riders. Whether to move up in the top 10 or to attack the maillot jaune, it has to happen on the road to Val Thorens. How the race unfolds depends on the GC situation after stage 19, so this list is subject to change.

Population: 19,714, 62,284 in for the Arlysère agglomeration community
For a long time, Tour riders would just cross Albertville to access the valleys of the Tarentaise or Beaufortain, but recently they stopped here regularly since it will be the third visit of the pack in four years. The first two allowed the French to shine. In 2012, Pierre Rolland took advantage of the dynamic format of the stage to win at La Toussuire-Les Sybelles. In 2016, Romain Bardet staged a show of strength in the finale to Saint-Gervais Mont Blanc to grab the stage and the second place in the overall standings. Finally, last year, it was in La Rosière that Geraint Thomas seized the yellow jersey that he kept all the way to Paris.

Overlooking the Doron, the vestiges of the château de Beaufort, built on the site of a Roman villa, reflect the long history of the village. Home of the Beaufort lords, the King of France and the House of Savoy, the castle has been inhabited since the 16th century by religious congregations. Beaufort is also famous for giving its names to a famous cheese.
Beaufort cheese

Dubbed the Prince of Gruyères, Beaufort is a smooth, ivory to pale yellow cheese with a fruity taste of extreme finesse. This cooked pressed cheese is made from the milk of the purebred cows or Abundance populating the mountain pastures in the summer. More than 10 kilos of milk are needed to get a kilo of Beaufort. Once demoulded, the cheese is refined in a cellar for 5 to 12 months, regularly returned and rubbed with a mixture of salt and cheese crust called "morge". If the monks and farmers of the region have always produced cheese, the Beaufort appeared towards the end of the 17th century. Highly esteemed in the middle of the 18th century, it found its definite identity around 1860, when two local carpenters invented the circles of wood that wrap it.

Population: 300. 3,525 in the town of Les Belleville
The Tour de France already climbed to the top of the highest ski resort in Europe in 1994. At the end of an eventful stage, Colombian Nelson Rodriguez outsprinted breakaway companion Piotr Urgumov of Latvia. The long climb to Val Thorens claimed a heavy toll as 68 riders missed the time cut before being allowed back in contention. Nelson Rodriguez, aka "Cacaïto", never repeated his success in the Tarentaise resort and the year 1994, when he took 6th place in the Giro, remains by far his best.

Val Thorens was voted best ski resort in the world for the fifth time in November 2018, a distinction received at the World Ski Awards held in Kitzbühel. With 1.8 million votes, it beat other world famous resorts like Kitzbühel or Verbier. Val Thorens was also voted best French resort for the sixth time in a row. 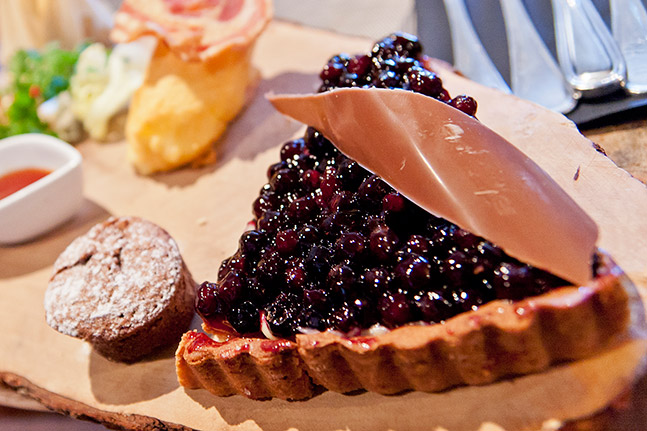