blazing_saddles Posts: 13,981
June 2019 edited June 2019 in Pro race
Sunday, June 9th – Stage 1 - Aurillac > Jussac - 142 km
At 142 kilometres, the 1st stage of the Critérium du Dauphiné takes in five climbs. So the race gets the climbing underway from the get-go. The hardest ascent is crested at kilometre 34 before continuing onto more lumpy terrain. The last summit lies 18 kilometres before the finish in Jussac.


The route includes a series of demanding climbs, starting with the Pas de Peyrol (Puy Mary), an ascension of 10.6 kilometres at 6.1%. The pass is tackled at kilometre 34 and following a toil at the highest road pass in the Massif Central the riders reach the peak at an elevation of 1,598 metres. Quite an impressive climb to start the race with. 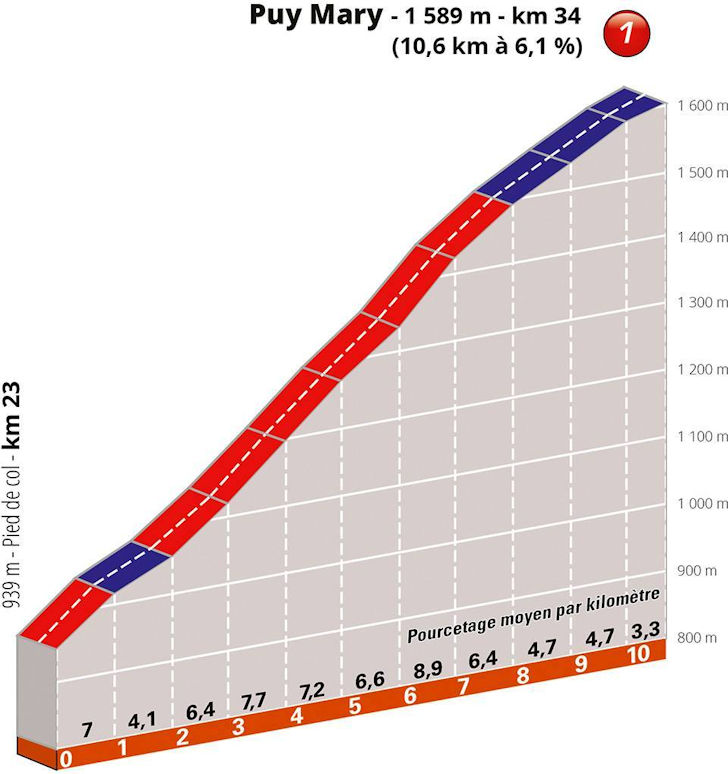 Monday, June 10th – Stage 2 - Mauriac > Craponne-sur-Arzon - 180 km
The 2nd stage of the Critérium du Dauphiné is played out on lumpy terrain. At 180 kilometres, the races includes eight intermediate hills in the Auvergne region. The last climb is crested 18 kilometres before the finish in Craponne-sur-Arzon.

Tuesday, June 11th – Stage 3 - Le Puy-en-Velay > Riom - 172 km
At 177 kilometres, the 3rd stage of the Critérium du Dauphiné presents the sprinters an opportunity to shine. Following a race with four moderate climbs the finale is fast and flat.

Wednesday, June 12th – Stage 4 - Roanne > Roanne – Individual Time Trial - 26,1 km
The 4th stage of the Critérium du Dauphiné is played out on a lumpy course of 26.1 kilometres. The ITT is an out-and-back race in Roanne.

In terms of distance and profile, the hilly route is almost a carbon copy of the Tour de France ITT in Pau. That race will cover 27 kilometres on similar terrain. So this ITT is a perfect test.

Thursday, June 13th – Stage 5 - Boën-sur-Lignon > Voiron - 201 km
The 5th stage of the Critérium du Dauphiné is likely to see a sprint finish in Voiron. The 201 kilometres race is played out on rolling roads before the last 60 kilometres are predominantly flat.

The riders leave the village for 80 kilometres on predominantly flat roads before the Col de la Chambotte appears. The climb is the first in a series of eight and it is not the easiest: 5 kilometres at 7.8%. Following the downhill the route continues to climb in more rolling fashion. Actually, the Côte de Lachat (2.9 kilometres at 4.7%) is the first part of a 35 kilometres long climb at shallow gradients to an altitude of 969 metres. Col du Frêne – 2.2 kilometres at 5.1% – is the last part of it before the ridders reach the summit at kilometre 131.5.

The Bochet is crested 8 kilometres before the riders enter a final lap of 16.5 kilometres. Roughly half of it is the ascent of the Col de Beaune – 8.1 kilometres at 6% – and the other half is a tricky descent to the line is Saint-Michel-de-Maurienne. 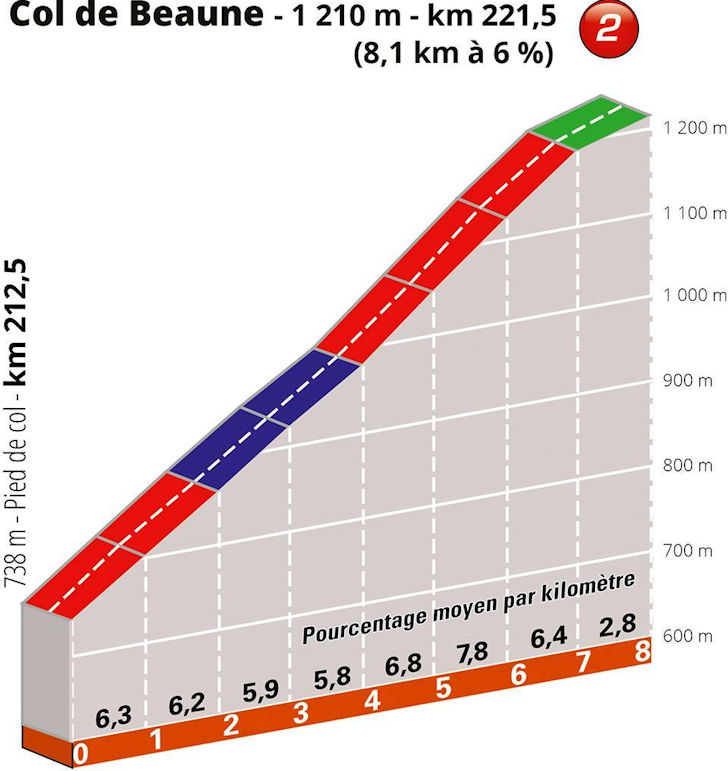 Saturday, June 15th – Stage 7 - Saint-Genix-les-Villages > Les Sept Laux-Pipay - 133 km
The 7th stage of the Critérium du Dauphiné is a mountainous race of 133.5 kilometres with an elevation gain of 4,150 metres. Expect the fireworks to detonate on the short and explosive course to Les Sept Laux-Pipay. The final climb is 19 kilometres at 6.9%

The route is well-balanced with a new peak every 30 kilometres or so. Following an undulating first 35 kilometres the stage kicks into gear at the foot of the Col de l’Épine.

The Montée de Pipay is a 19 kilometres toil with an average gradient of 6.9%. It is a steady test with no double digits, the challenge is the sheer length of it. With the final climb the Dauphiné lives up to its promise to test unknown ascents, as the Montée de Pipay was not climbed by the pro-peloton since the 1980 Tour de France. 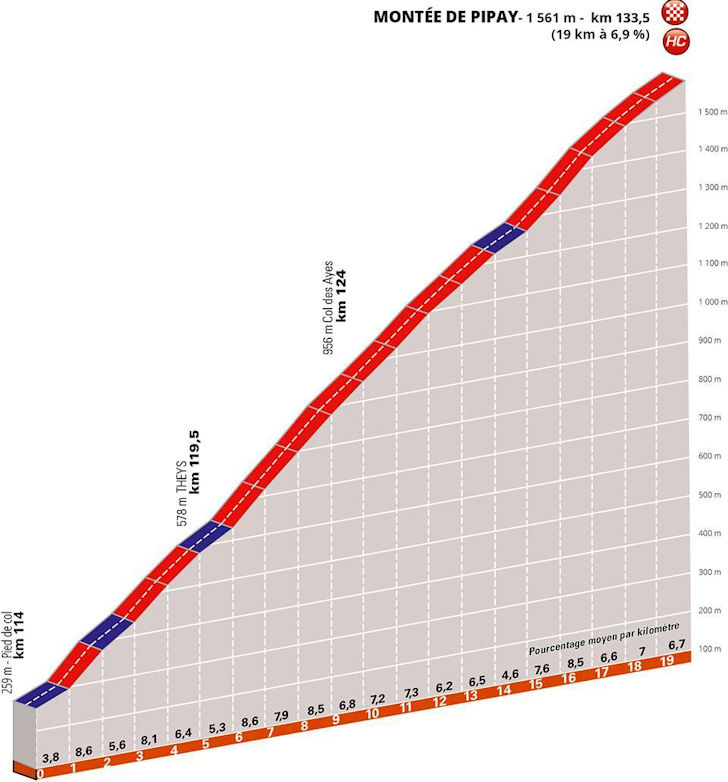 Stage 8 is an explosive race with an explosive start. Three peaks are covered within the first 22 kilometres. So that should be the tonic to ignite the fireworks early on. 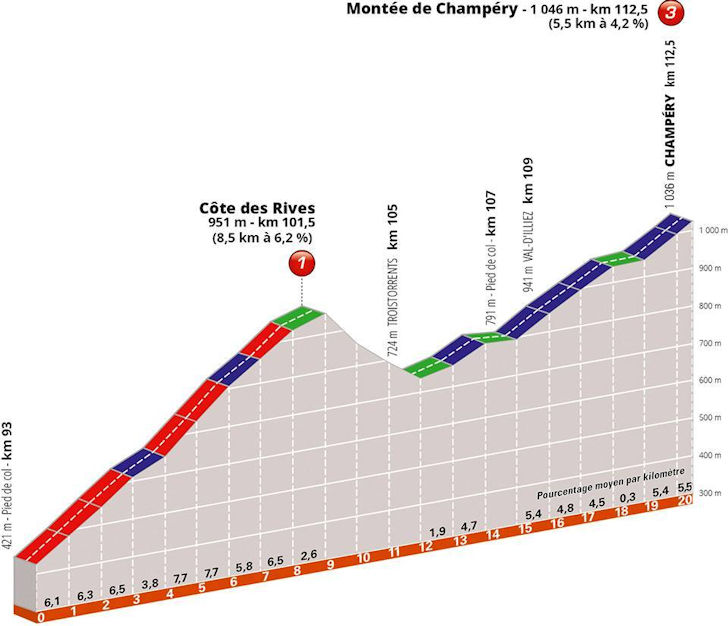 Three-time Dauphiné winner Chris Froome will face opposition from the usual suspects, including Jakob Fuglsang, Romain Bardet, Dan Martin and Richie Porte, as well as riders such as Thibaut Pinot and Nairo Quintana, who are coming back to the race with even loftier ambitions.
Meanwhile, Tom Dumoulin is also confirmed to return to racing, subject to a final MRI scan, today.
"Science is a tool for cheaters". An anonymous French PE teacher.
0
«1234567…10»