The journey through the Massif Central will for the first time finish at Puy Mary and will feature the biggest elevation gain of the 2020 Tour with a total of almost 4,500 metres of climbing. Before taking on the final climb, the riders will have to deal with the Col de Ceyssat and the Col de Neronne. The favorites will need to be at their very best. 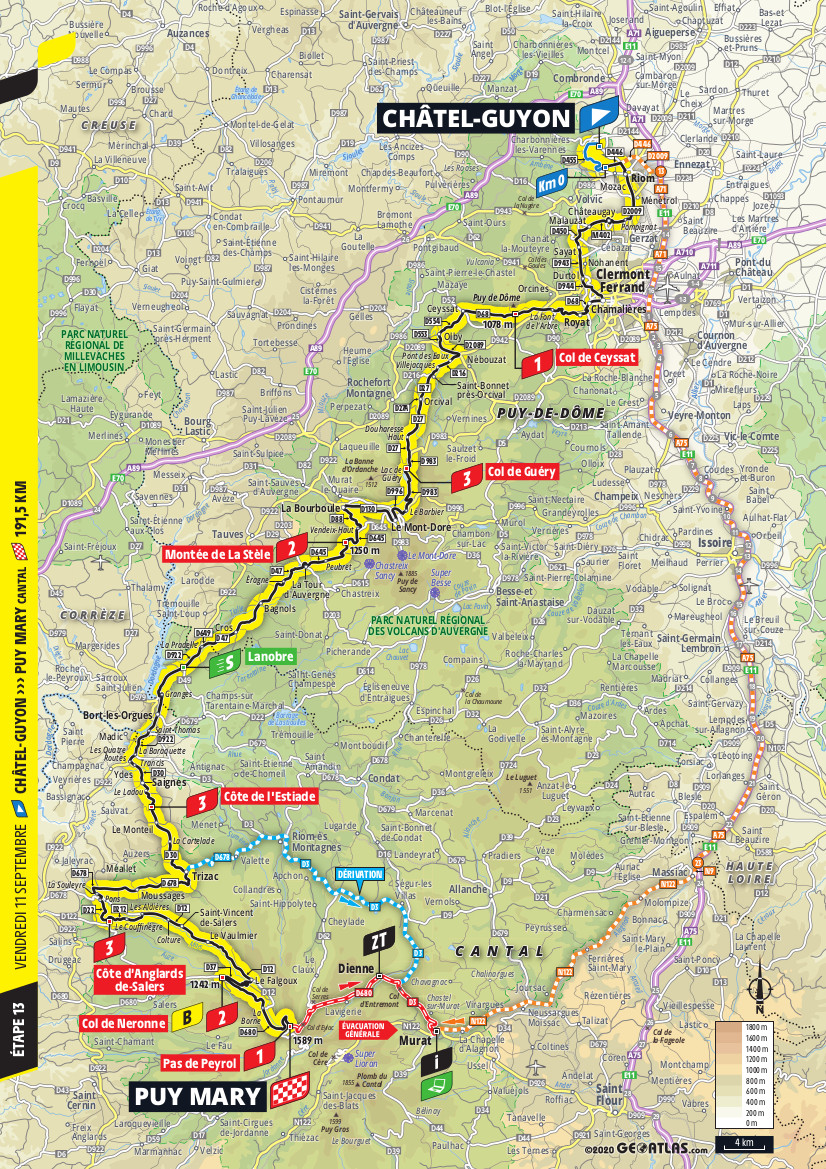 The riders traverse deep into the mountainous heart of the Massif Central. Amounting to 191 kilometres, the race leads from Châtel-Guyon to a summit finish on Puy Mary.
Riders who like to race on flat roads have to savour the first 5 kilometres, as the rest of the route goes either up or down. 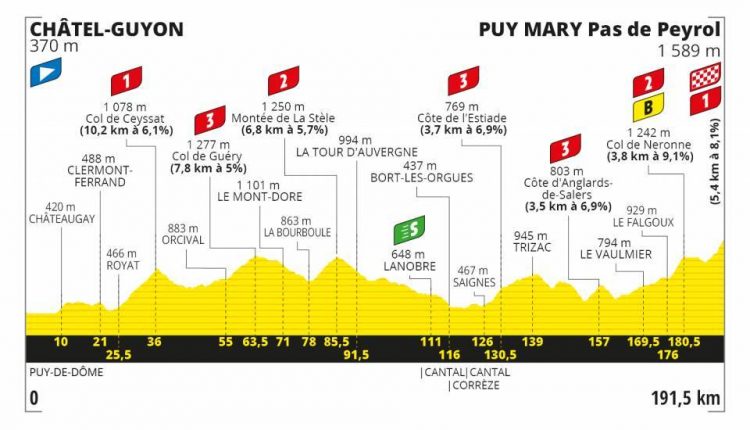 The first proper uphill test takes the shape of the Col de Ceyssat, an ascent of 11.8 kilometres at 5.9% with its crest after 35.5 kilometres. 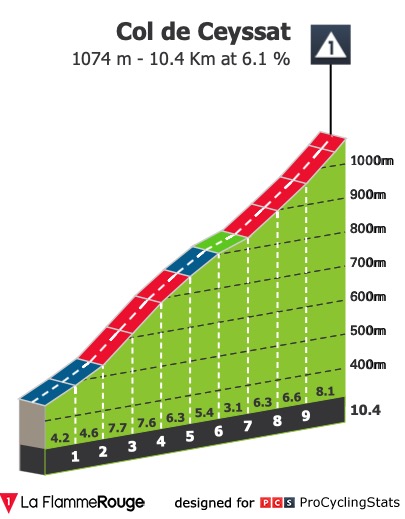 The route continues on hilly terrain for the rest of the day. Sometimes the uphills are awarded with a KOM-classification, sometimes not.
The Côte de la Stèle is 7.1 kilometres long and the average gradient sits at 5.5%. The summit is crested at kilometre 85 before the race continues in similar fashion. 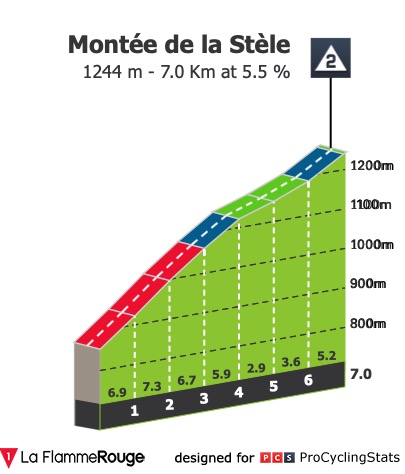 The last 15 kilometres are even more challenging.
Firstly, the 3.8 kilometres uphill on the Col de Neronne. The average gradient of 9.1% features quite some double digit stretches. The riders reach the summit – where 8, 5 and 2 bonus seconds are to be gained. 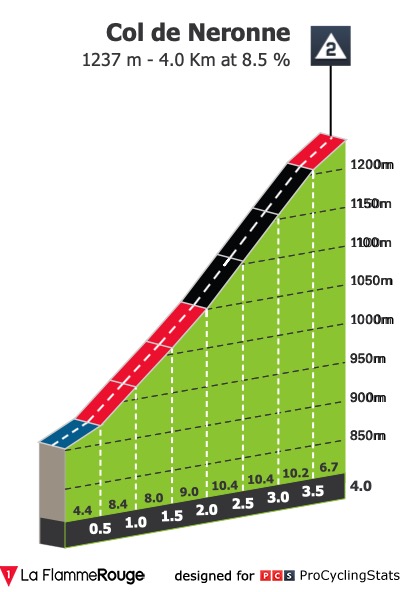 They continue onto a plateau of 4 kilometres long before a 2 kilometres drop down to the foot of the final haul up. Depending on where the start is taken from, the Puy Mary – or, Pas de Peyrol – is a climb of 5.4 kilometres at 8.1% with the last 2.4 kilometres double digit material. The Puy Mary is an extinct volcano of roughly 6.5 millions years old, surrounded by even more extinct volcanoes of the Auvergne region. The finish lies at an elevation of 1,589 metres. 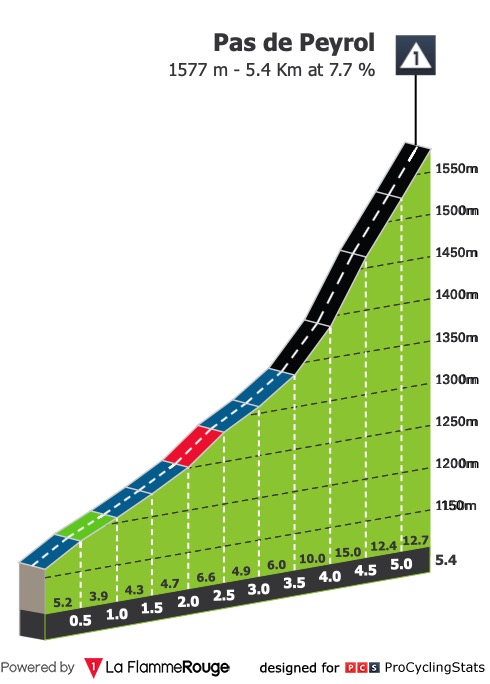 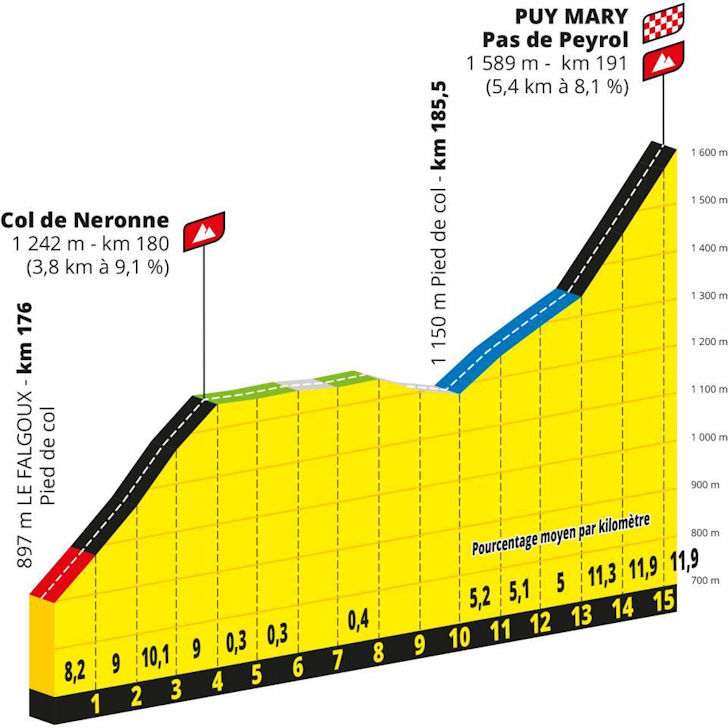 One would expect the hardest race on the Tour France to be played out in the Pyrenees or Alps. But no. Stage 13 takes in an altitude gain of over 4,400 metres, which is more than any other stage this year.
The course is an open invitation for GC riders to test their rivals. So, clash of GC riders is on the cards, but it remains to be seen if they will battle it out for the stage win or merely to put time into each other.
This stage should also see the serious contenders for the polka dot jersey come out to play, possibly for the first time, as the terrain is so favourable towards the breakaway.

A spa town with character, Châtel-Guyon is located in the foothills of the Chain of the Puys, listed in 2018 as a UNESCO World Heritage Site. Formerly a winegrower's town, hydrotherapy only changed the city's destiny in the 19th century. Indeed the exceptional waters of Châtel-Guyon have the virtues necessary to combat digestive and rheumatological disorders.

The charming spa town of Chatel-Guyon already attracted the attention of cycling fans on Paris-Nice. The Race to the Sun came here twice, for a start in 2013 and for the finish of a stage won by Frenchman Jonathan Hivert in 2018. In 2013, Paris-Nice had left for Brioude, where American Andrew Talansky had won in style before finishing second overall.

Seventy kilometers in diameter and 4,000 meters above sea level, it is the largest stratovolcano in Europe. Three million years after its eruptions ended, the crater has disappeared and seven glacial valleys which start in a star from Puy Mary formed the Cantal landscape.
The massif consists of a single volcano, unlike the neighboring Puy-de-Dôme chain which is a chain of 80 volcanoes. Of the Cantal volcano, there remains only a group of around sixty Puys (mountains), the highest peaking at 1,855m (Plomb du Cantal).

The Tour de France has already been ten times to the foot of Puy Mary by Pas de Peyrol, but it is the first time that a finish takes place at the very top. The most visited site in Auvergne is also, as a result, the most visited Massif Central summit by the Tour since the Puy de Dome is no longer accessible. The ascent of Pas de Peyrol, while it was only rated once as a first category climb saw the best climbers of their time reach the top in the lead: Federico Bahamontes (1963), Lucien Van Impe (1973 and 1983) and Richard Virenque (2004) 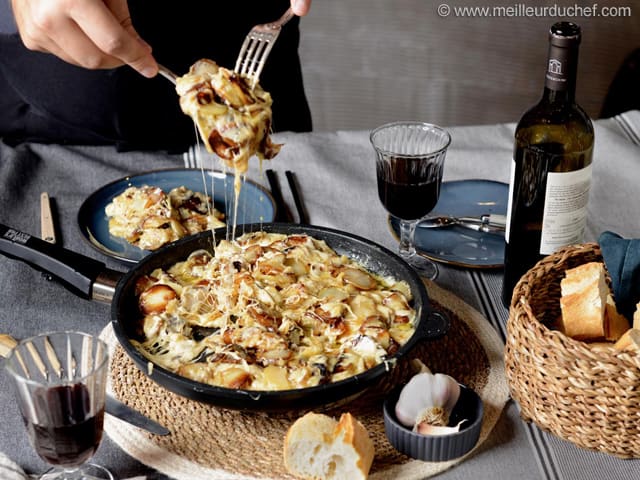 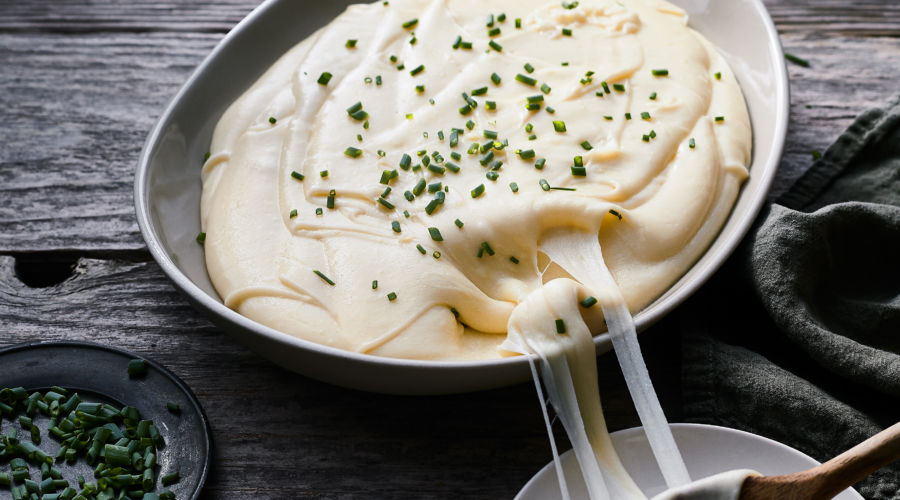