The 17th stage of the Tour de France goes to the summit of the Col du Portet. The route is only 65 kilometres long, but 38 kilometres run uphill. Although being the shortest road stage of the 2018 Tour, this could very well turn out to be the hardest. The race ends with a sweeping 16 kilometres haul to the top of the Portet.
Christian Prudhomme says it's the shortest non-TT stage for more than 30 years, and should lead to a race which is 'dynamite'. The climbs are the Col de Peyresourdes/Montée de Peyragudes, the Col de Val Louron-Azet, and the Col de Portet.
The shortest stage in last year’s Tour went to Foix and was a sensational ride. The race offered fireworks from start to finish before Warren Barguil outsprinted Nairo Quintana, Albert Contador and Mikel Landa on the line.

The start will be like a Formula One race, or cyclo-cross. The innovative start has been introduced because the organisers expect fireworks from the start of what is a very short stage.

Video of how it will work.
https://www.dailymotion.com/video/x6nks2m

There's to be space at the start for every team to warm up on rollers, so that no neutralised section is needed. Then comes the special start-line arrangement. The yellow jersey will be front and centre, with the second-placed rider a few metres to his left, and the third-placed rider a few metres to his right - and so on, with the top ten riders on the front row of the grid.

On the next row will be numbers 11 to 20 in the GC. Numbers 21 to 40 will be in a pen behind the first twenty riders, and after that there'll be forty riders per pen.

The first climb is the Peyresourde/Peyragudes. 'Whoever wants to sprint to the foot of the Col de Peyresourde can do so. Whichever leader prefers to wait for his team mates can do that too - at his own risk,' says the man responsible for the route, Thierry Gouvenou. 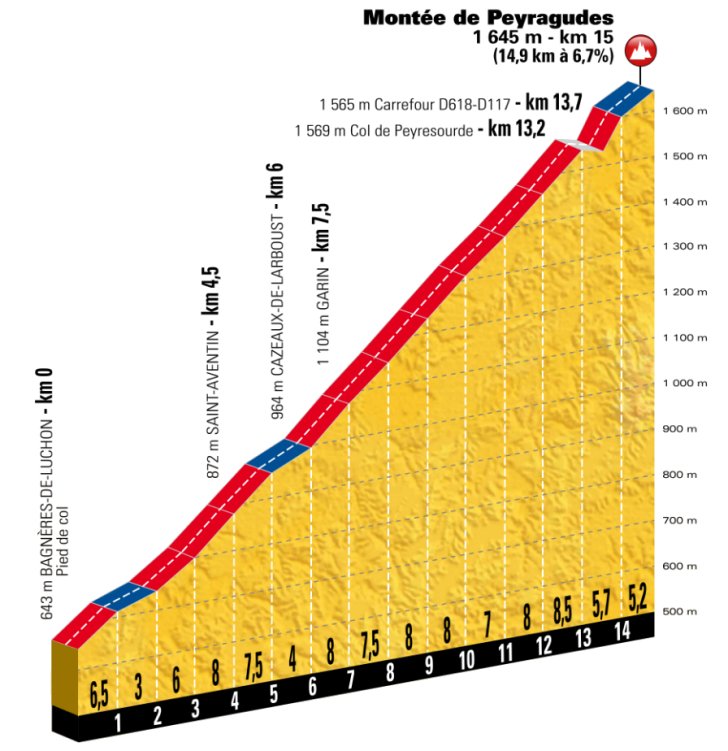 The Col de Peyresourde has featured in the Tour many times since Octave Lapize was first to the top in 1910. In 2014, Vasil Kiryienka led over the summit. In 2016 (Stage 8), the riders tackled the Peyresourde from the other side (the west), then there was a descent to the finish at Bagnères-de-Luchon, where Chris Froome's crazy descending style won him much admiration and the stage. Straight after the Col de Peyresourde, and counting as part of the same categorised climb, comes the bonus of the Montée de Peyragudes - the steep ramp of the altiport which was the finish of Stage 12 of the 2017 Tour. Chris Froome struggled as Romain Bardet won the stage, and Fabio Aru took the yellow jersey. That's no doubt part of the reason why this climb is on the itinerary again, but will it cause problems for Froome second time around?

After the Montée de Peyragudes comes the descent to the Lac de Génos-Loudenvielle and to the village of Loudenvielle (which has thermal sulphur waters at Balnéa). (The suffix -vielle in the names of villages here comes from the Latin villa, meaning a farm or rural dwelling). Loudenvielle is the location of the day's intermediate sprint, although it's doubtful it will be won by a sprinter.

The second climb is the Col de Val Louron-Azet, which is a 7.4 kilometres toil at 8.3%. The KOM points are up for grabs where Claudio Chiappucci took a stage victory back in 1991. This time, the riders have 38 kilometres left to race. The route then descends to the village of Saint-Lary-Soulan. Saint-Lary-Soulan - meaning the sunny place of St Hilary - is a spa and ski resort. The ski area is to the west of Saint-Lary, as far as the lac de l'Oule, at Pla-d'Adet. West is the direction the race now takes, for the climb to the finish, which is the extremely demanding closing climb to the summit of the Col du Portet. The 16 kilometres ascent is averaging 8.7%, while the second, third ánd last kilometre are the steepest sectors, all with double digits gradients. Only one moment of respite for the tired legs when the climb flattens out to a false flat after 7 kilometres. Yet, this section is only 400 metres… 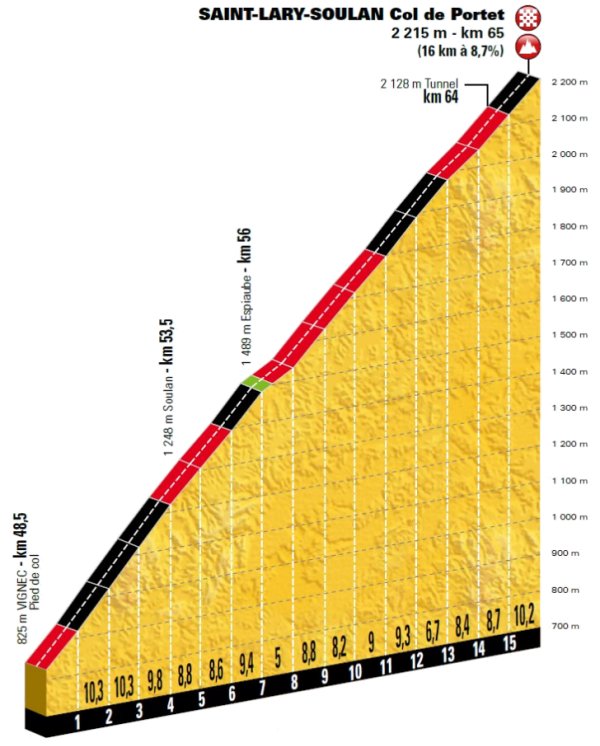 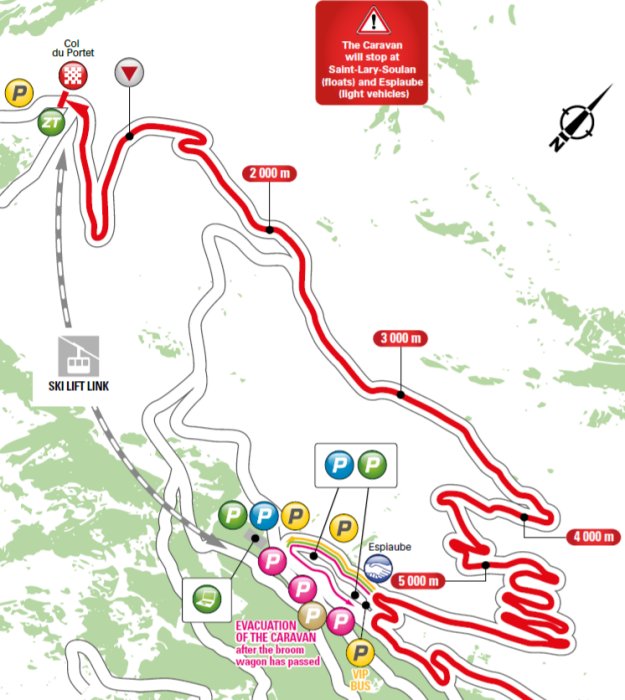 The publicity caravan sets off from Bagnères-de-Luchon at 1255, and the peloton at 1515. The estimated average speeds are 26, 28, and 30kmh, and depending on which is the most accurate, the riders should arrive at the finish line between 1723 and 1744cet.

The team hotels for this stage. 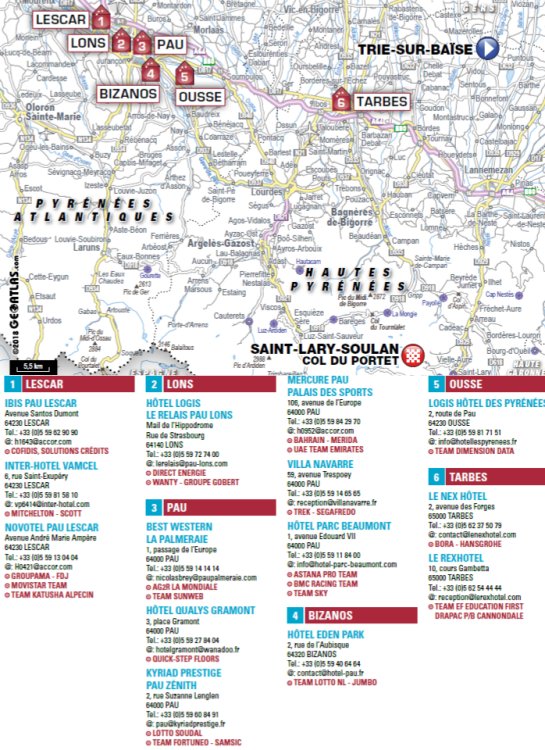 St Lary-Soulan was mainly the creation of a man, Vincent Mir, who became the resort’s mayor in 1945 and decided after WWII to turn his valley and his hamelt into an international ski resort. While few believed in his project, the stubborn mountaineer, whose family came from Aragon in Spain, never gave up. In 1954, he obtained the rights from the prefecture to install a ski lift. Three years later, the ski resort received its first visitors. Six years later, it joined forces with the village of Soulan to multiply by three the surface of the skiing domain. The region already had a legendary ski champion in Francois Vignole, who has won a world medal in 1935. Vignole looked after Vincent Mir’s daughter Isabelle and turned her into one of the best downhill skiers in the world. In late 1967, shortly before the Grenoble Olympics, the French alpine skiing team trained in St Lary for lack of snow in the Alps. The result was sensational as the likes of Jean-Claude Killy, Marielle Goitschel and of course Isabelle Mir and another Pyrenees skier, Amnie Famose, collected titles and medals. While Vincent Mir was proud of “Mirabelle”, he was more of a rugby man and two members of the family, Jean-Henri Mir and Jean-Pierre Mir, played for then leading club FC Lourdes and for France. Jean-Henri was part of the French team who achieved a Grand Slam victory in the 1968 Five Nations Championship. He took over from Vincent as St Lary’s mayor in 1991 and continued to develop the resort. His leading councillor is cousin André Mir while one of the best-known hotels in town, Hotel Mir of course, is run by Jean-Marie, another cousin. On the ski slopes, while Jordi Mir had a brief national career in the 1990s, the baton passed to the Delerue family with Xavier and Paul-Henri, both snowboard Olympic or world medallists.

Sensoria is a health centre in the centre of St Lary. Its spa is a replica of the Spanish canyons of Sierra de Guara and visitors can relax between waterfalls, streams and massaging baths.

In the summer, the ski resort turns into a haven for cyclists and especially Tour de France riders, who regularly visited St Lary. In 1976, Lucien Van Impe won the stage that would prove decisive in his conquest of the yellow jersey. From the start in St Gaudens, the Belgian believed in his chances: “When I’m in shape, I drink very little. It’s bad for the stomach. In the morning, I left St Gaudens with only one bottle and it’s still half-full,” he said at the finish. Van Impe also scored vital KOM points in St Lary in 1981. Other climbers to have made a major impact in town were Mariano Martinez (1978) or more recently Rafal Majka (2014), at Pla d’Adet.