Two years after a stage on the Tour de France to Tignes was washed (along with Geraint Thomas's chances) away by flash floods, the ASO have made true on their promise of bringing the race back.
The route amounts to 145 kilometres, so making it the second short, punchy mountain stage. There are five climbs peppered along the route between Cluses and the ski station at Tignes. Consequently, the climbing starts relatively early and probably means that a large break will get away, while the sprinters labour, hoping for the pace to let up, sooner, rather than later. 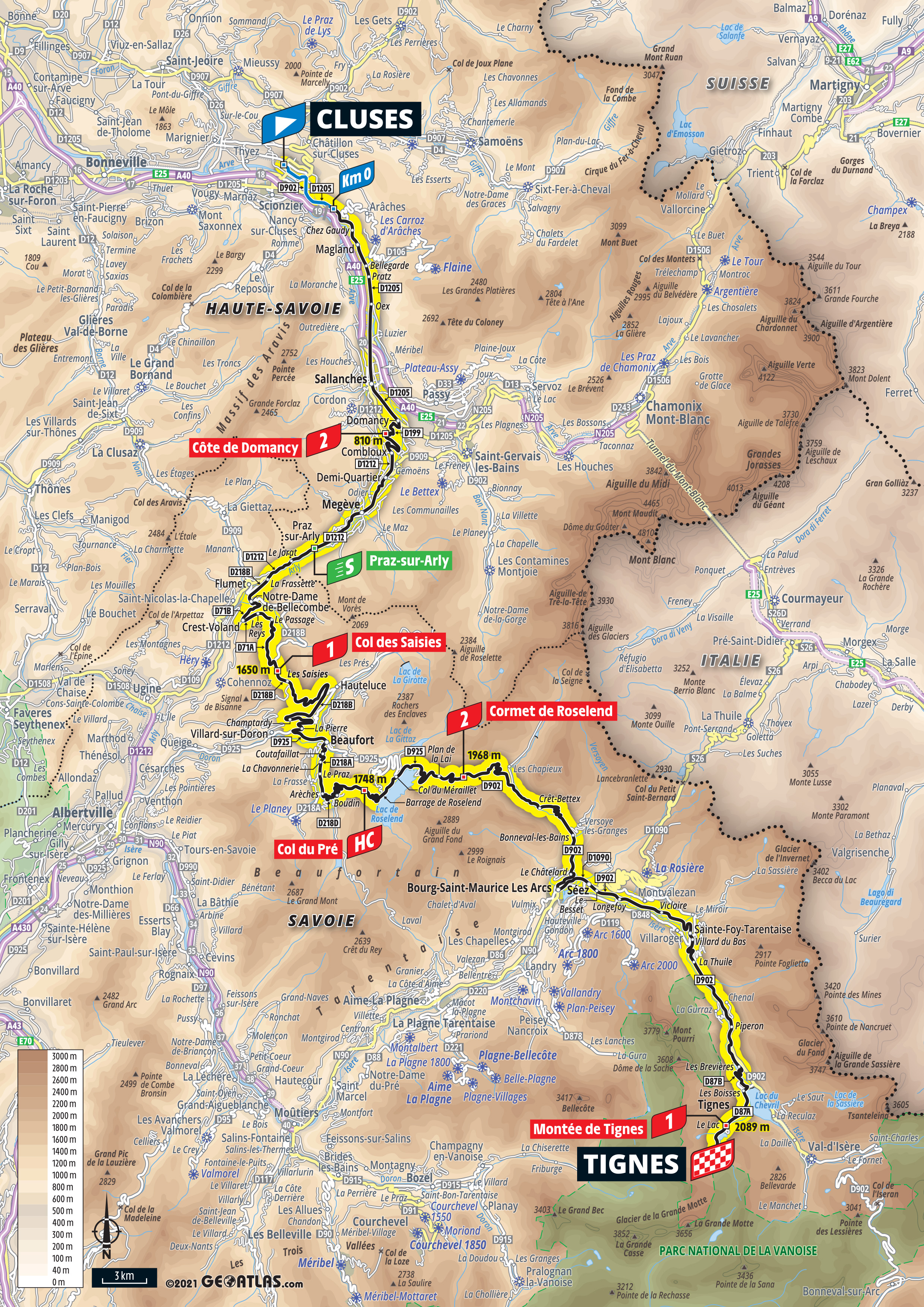 The punchy Côte de Domancy is likely to see a lot of attacks. It's short at 2.5 kilometres, but has steep agradient of 9.4% . It appears after 17.5 kilometres. The route then moves through the Arly valley to enter the Col des Saisies after 40 kilometres. After a long descent and having past the world famous cheese village of Beaufort, the riders next face the Col du Pré, which climbs for 12.6 kilometres. A short descent leads to the short equally short ascent of the Cormet de Roselend.
After taking in some of the most stunning scenery of the race so far the riders begin the long descent down into Bourg-Saint-Maurice followed by the 21km climb of the Montée de Tignes. 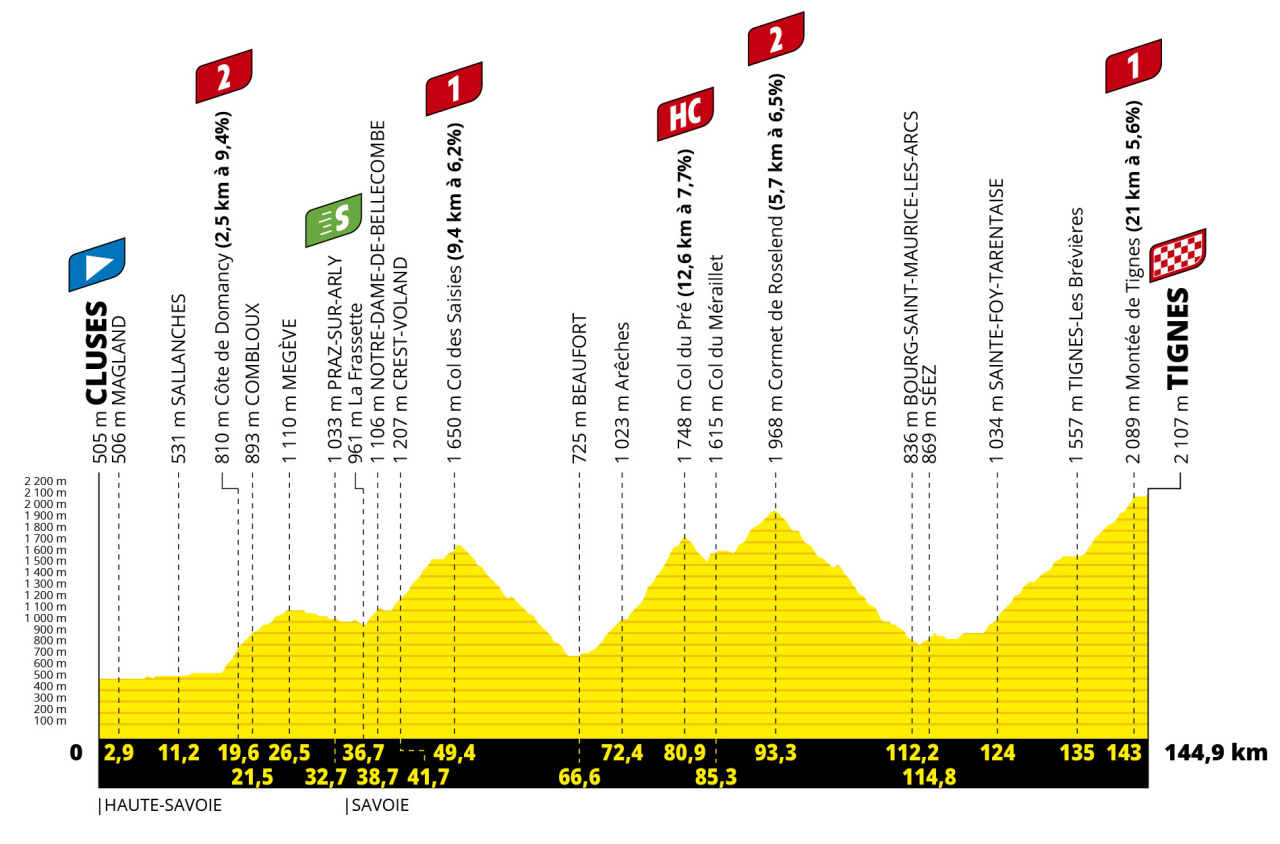 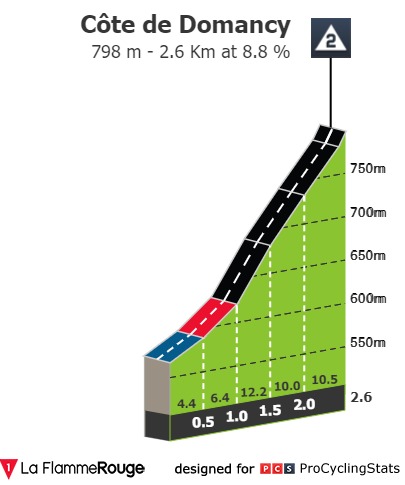 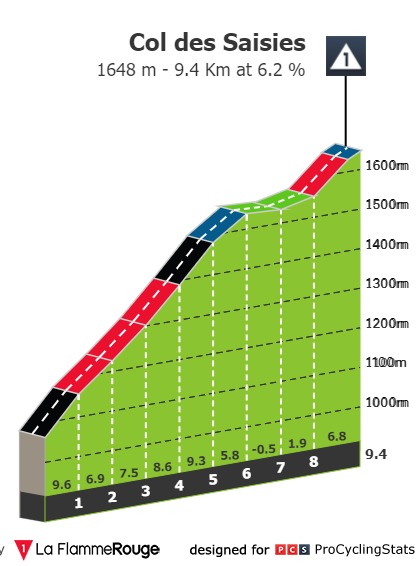 The Col du Pré climbs for 12.6 kilometres and the average gradient sits at 7.7%. 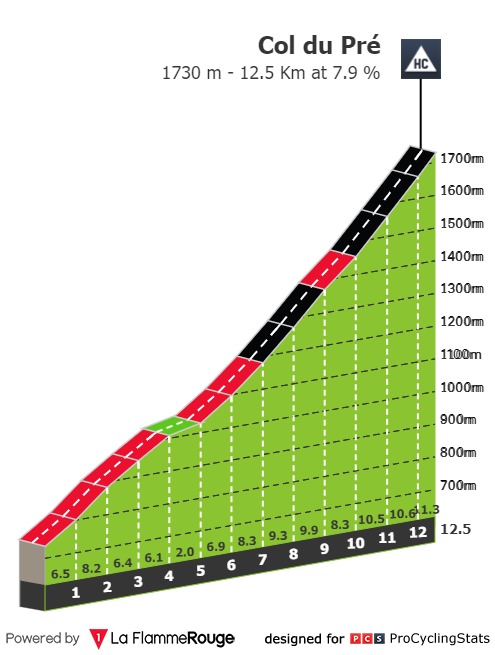 A short descent and a section on the flat lead onto the next obstacle. The Cormet de Roselend is a 5.7 kilometres climb at 6.5%. 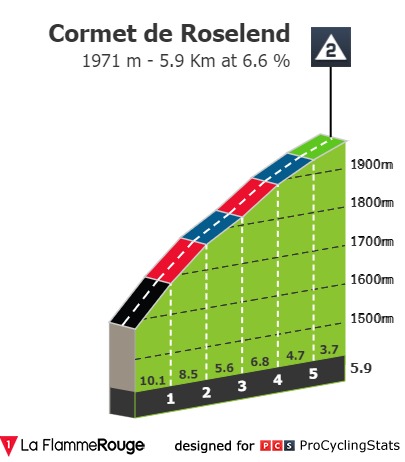 The Montée de Tignes is 21 kilometres long, while the average gradient sits at 5.6%. Halfway up the climb the route flattens out for 2.5 kilometres before continuing with a slightly steeper second half.
While this a brute of a climb, especially in it's second half, this isn’t a summit finish, as the road flattens out with 2 kilometres to go. 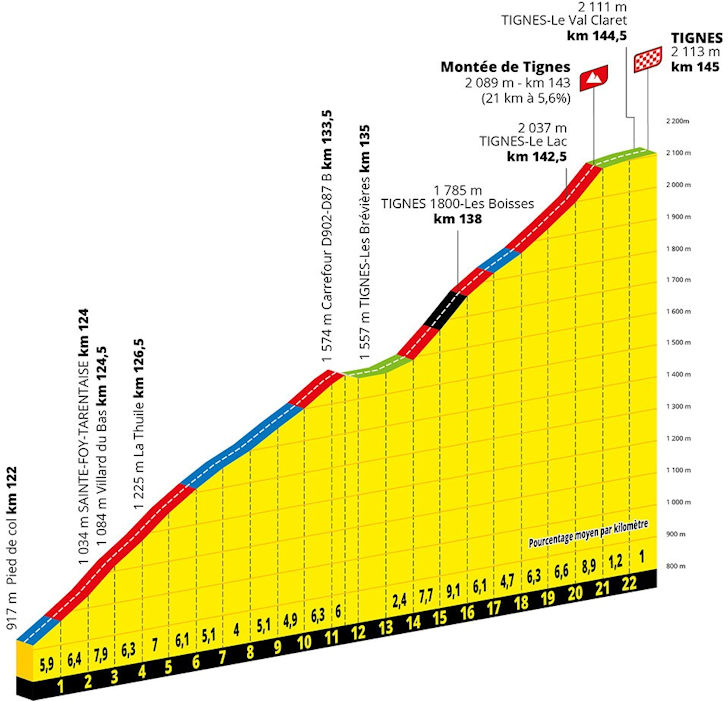 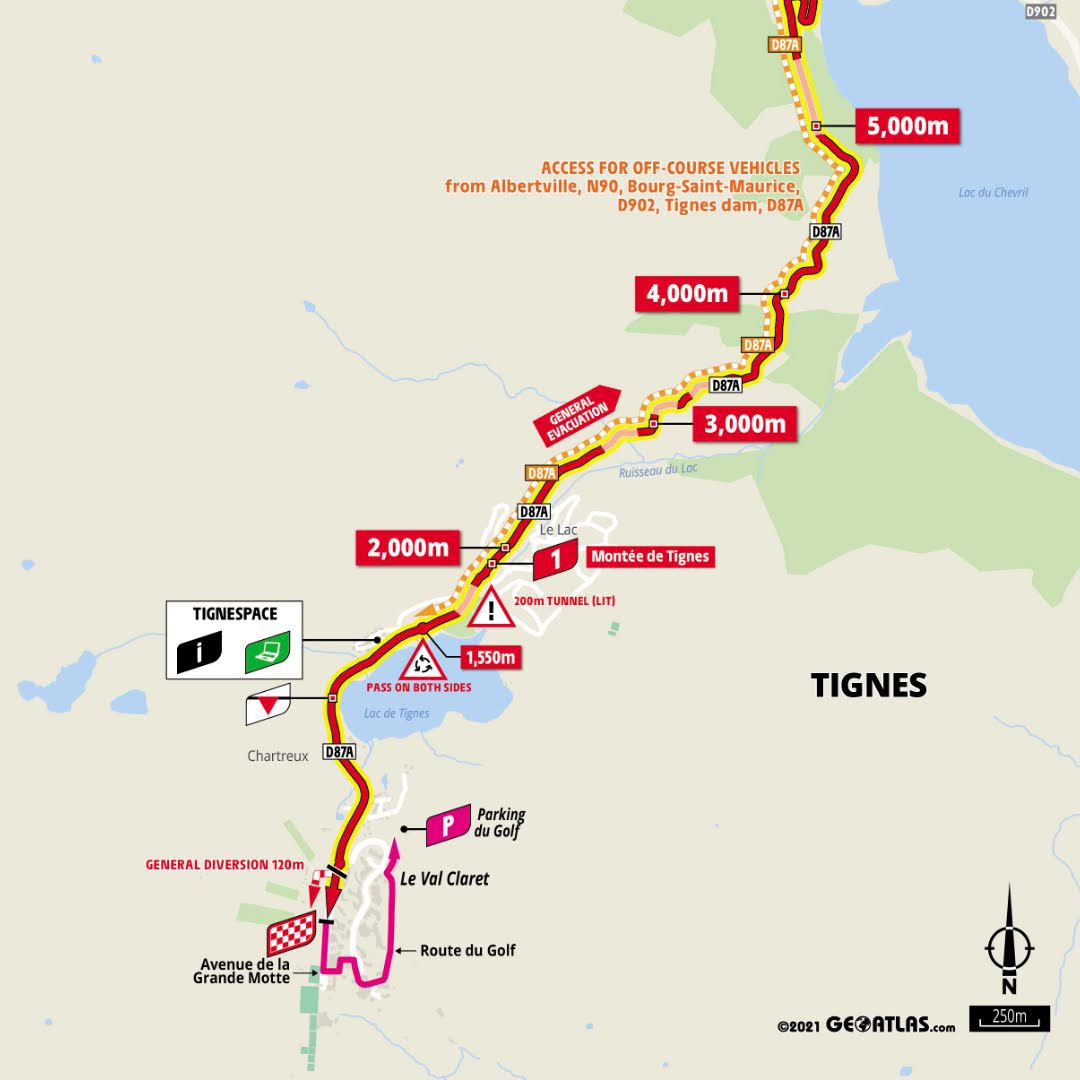 With five climbs the certainty for a full on GC battle was there, until yesterday. It's now hard to see the breakaway not surviving to the finish, with UAE content to control the race until Wednesday at least, but probably the Pyrenees. Indeed, some climbers may now switch their attention to the Polka Dot jersey: a positive to come out of yesterday's annihilation of the challengers.

In the 18th century, watchmaking was introduced into the valley to supply the firms in Geneva and the Royal School of Watchmaking was created in Cluses. Faced with the needs of industry, the manufacture of small micromechanical parts in series developed: screw-cutting was born. This activity consists of manufacturing turned metal parts from metal bars or wire. The outlets are mainly the automobile industry, aeronautics and dental equipment. Cluses and the Arve Valley have thus become the economic lung of Haute-Savoie.

Cluses twice hosted the finish of a Tour de France stage from the Tarentaise valley. This was the case in 1994, with a stage that started in Moutiers and was won by Piotr Ugrumov and in 2002 for a stage staring in Aime. Cluses has been more often on the programme of the Critérium du Dauphiné, the last time in 2019 for the start of a stage won in Switzerland in Champéry by Dylan Van Baarle, but also of the Tour des Pays de Savoie, with prestigious winners, Tao Geoghegan Hart in 2016 and Egan Bernal in 2017.

On the Road
Km 66.6
Beaufort (Pop: 2,050)
Beaufort cheese
The "Prince of Gruyères", Beaufort is a smooth, ivory to pale yellow cheese with a fruity taste of extreme finesse. 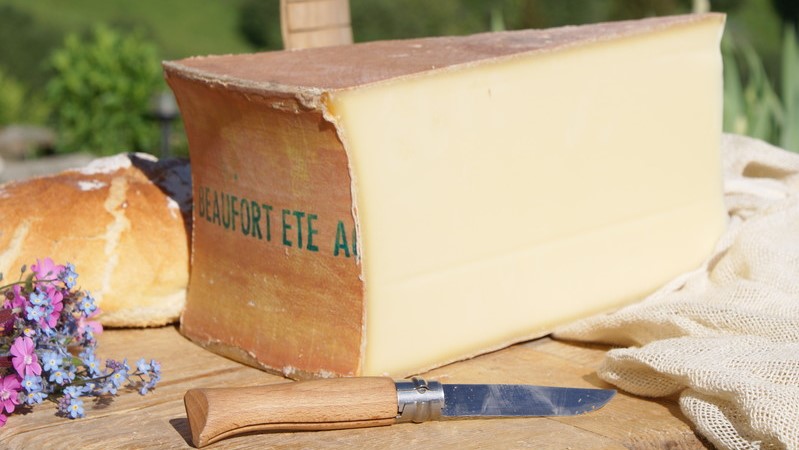 Km 93
Cormet de Roselend (1,968 m)
Linking the Beaufortain valley and the Mont-Blanc massif, the Cormet de Roselend has been climbed 12 times by Tour de France riders since 1979. The last rider to lead over the pass was Marc Hirschi last year, on the opposite side. The Tour de France had to return to Tignes after the truncated 2019 stage, where torrential rain and a landslide prevented the riders from cycling to the Tarentaise resort. An exceptional setting, between lakes, glaciers and mythical peaks, a privileged experience consists in climbing onto the roof terrace of the Grande Motte cable car (accessible only in summer), and enjoying a 360° view of an exceptional panorama at an altitude of over 3,000 m. One of the most beautiful in the French Alps, with a view of Mont Pourri, 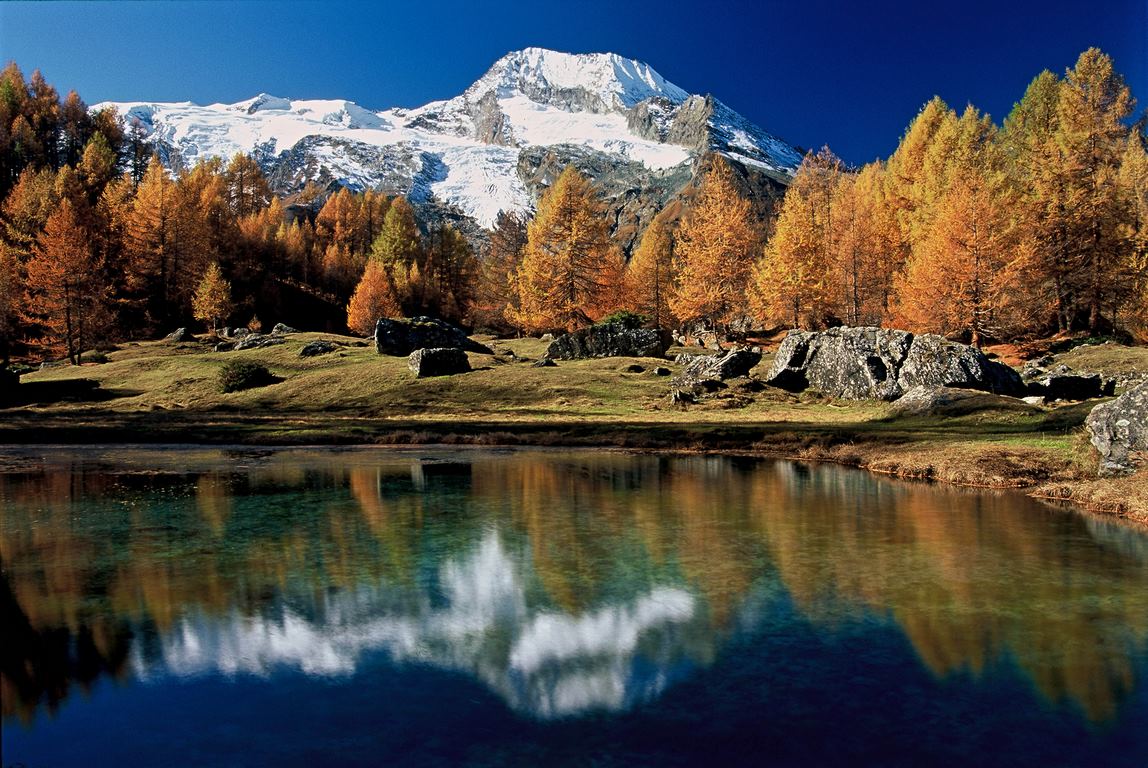 the Grande Sassière ridges, the Grande Casse (highest point of the Vanoise: 3,856 m) and the majestic Mont Blanc range on the horizon. An audio-guide enriches this experience.
Or why not simply enjoy a blueberry tart in one of the refuges accessible from the heart of the resort.