Mostly running along the Adriatic coast, the 9th stage of the Giro d'Italia serves a 200 kilometres route from Giovinazzo to Vieste. From Giovinazzo the riders will go north, following the coastline for 90 km towards the first intermediate sprint in Manfredonia. There, they will enter the Gargano peninsula. 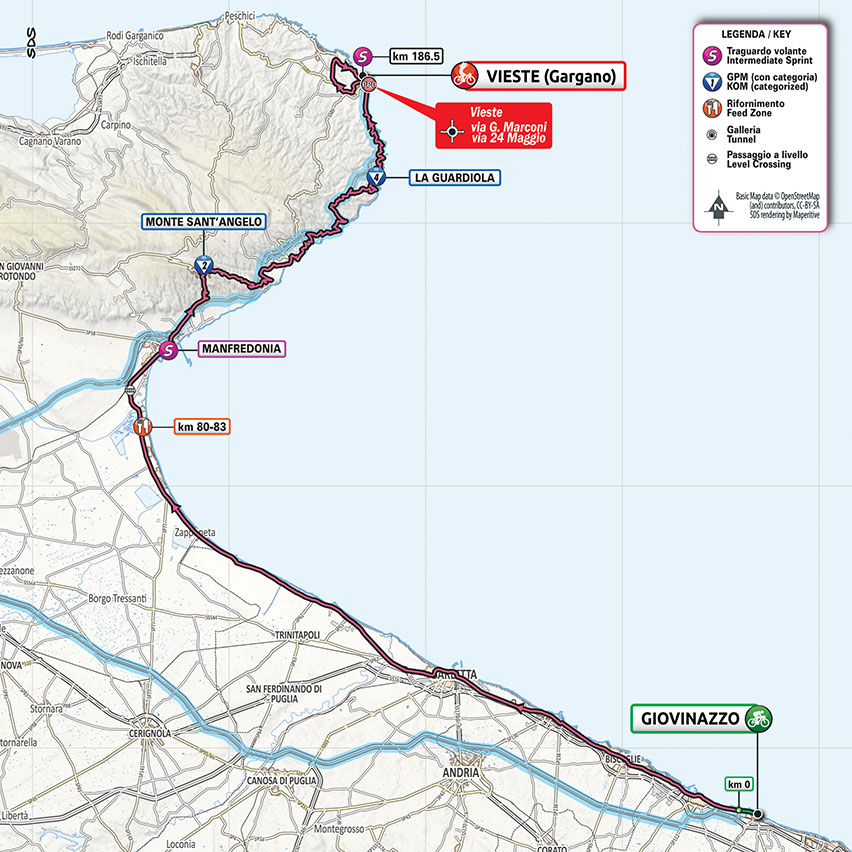 Flat roads in the first half lead onto a more hilly profile in the second half. A local circuit with a double digit ramp with 10 kilometres out serves as finale. Once the riders reach the finishing town of Vieste they will enter a 15 km circuit to be repeated twice. 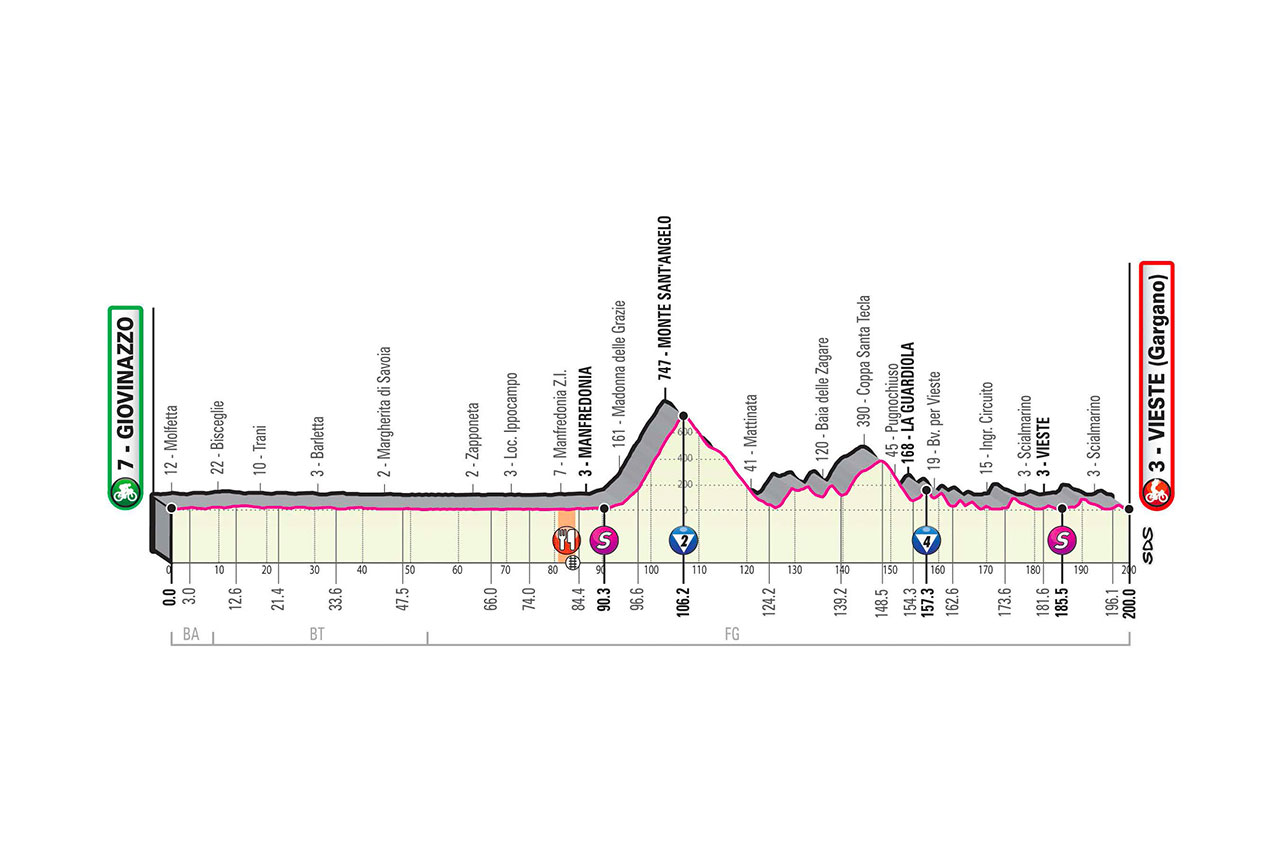 The Monte Sant’Angelo is the first obstacle, which is an ascent of 8.7 kilometres with an average gradient of 6.6%. 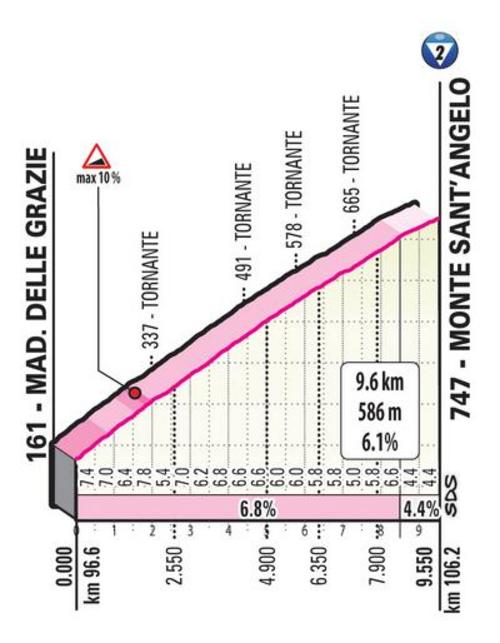 A gradual descent of almost 20 kilometres leads back to the coast and until the Coppa Santa Tecla appears the road goes either up or down. The Coppa Santa Tecla slopes 3 kilometres at 6% before it flattens out. The summit is crested with almost 50 kilometres remaining.
After the descent, the next little climb is categorized, La Guardiola (GPM4, 1.4 km at 5.6%). 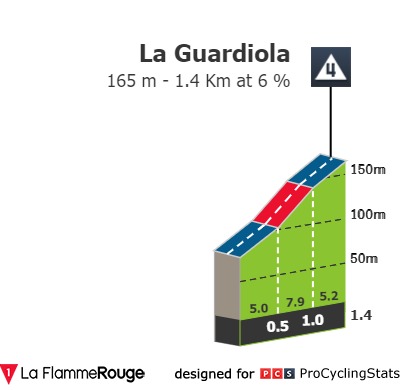 Just after moving through Vieste for the first time, the Giro turns inland again to tackle a 14.5 kilometres loop which features a sharp climb on the Via Saragat – 1 kilometre long and with ramps up to 17%. It tops out at 10 km to go, mostly descending false flats. 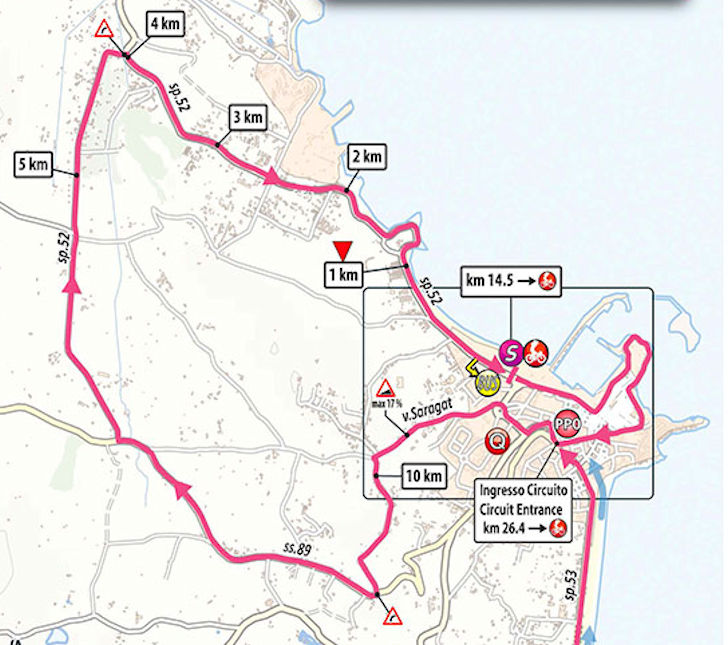 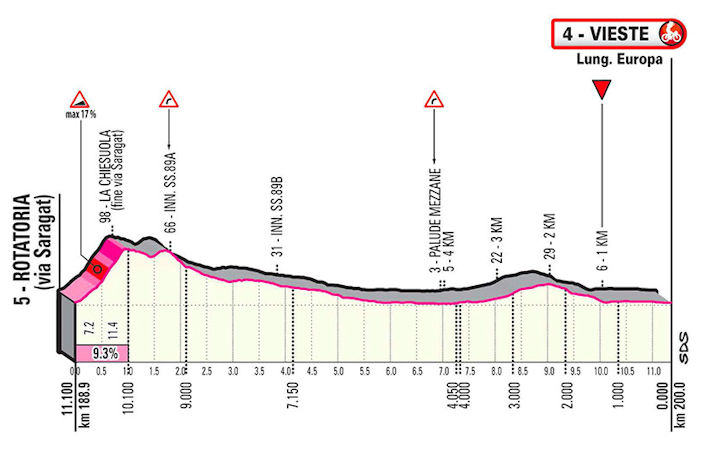 There are two intermediate sprints – at kilometre 90.3 and kilometre 185.5.

The breakaway could be successful, although other viable options are a late attack or a sprint of a reduced peloton or select group. In other words, pretty much any scenario the average follower of road racing can think of.

Fascinating seaside village with an ancient heart, with the dolmen of San Silvestro, the Cathedral of Santa Maria Assunta is one of the most delightful medieval villages located on the Adriatic.
With its characteristic marina and the splendid fortified promenade with a walkway over the sea, it offers clean beaches and, at dusk, lights up with locals.

Among the dishes to savor in this beautiful city we find: the famous “pizzella” the delicious “brasciole” and the typical “favetta with chicory” as well as many other delicious dishes. 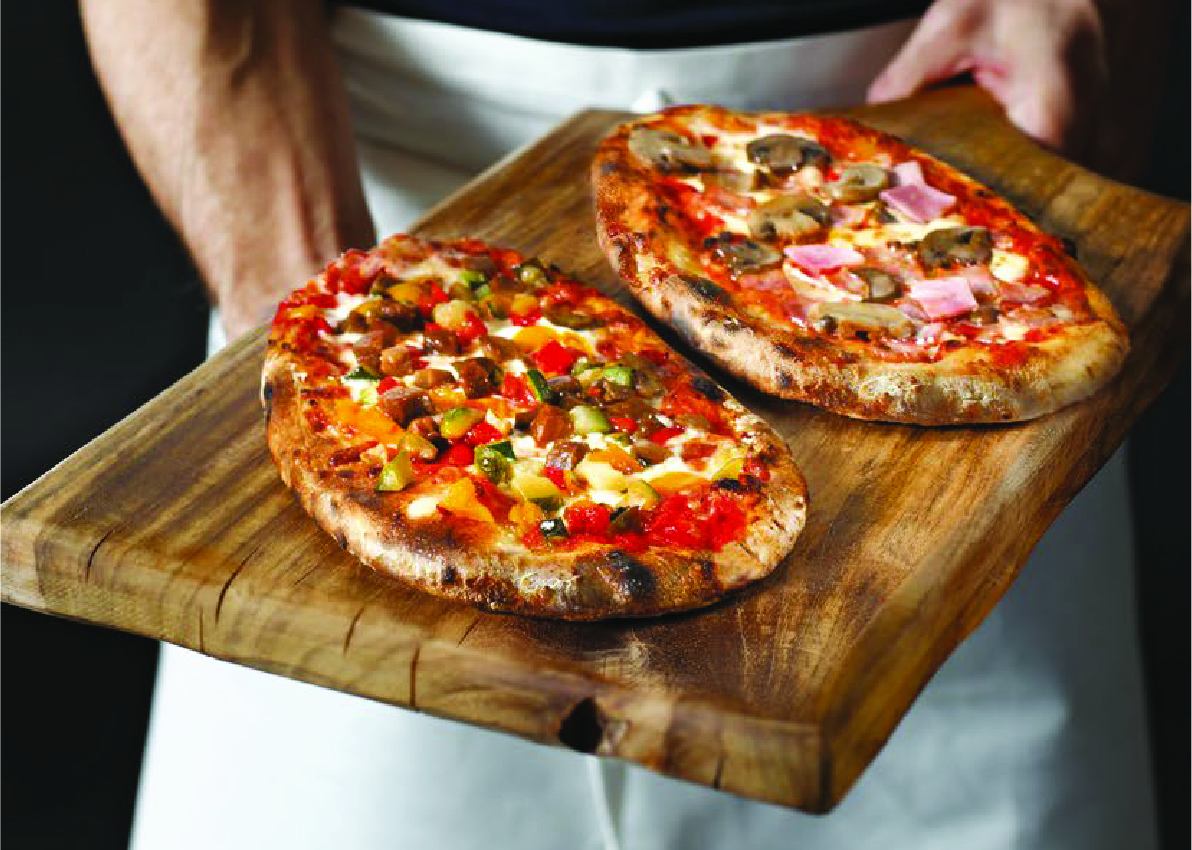 It is the easternmost municipality of the Gargano promontory and of the province of Foggia. The particular urban location of Vieste is linked to the karst nature of the Garganico Promontory. The numerous archaeological sites and finds found in different areas attest to the population of the territory of Vieste since the Paleolithic era.
At the entrance of the village, on the ‘Castello’ beach, south of the town, stands a white limestone monolith, almost 25 meters high, called Pizzomunno, almost the symbol of the Gargano town, almost to guard Vieste. 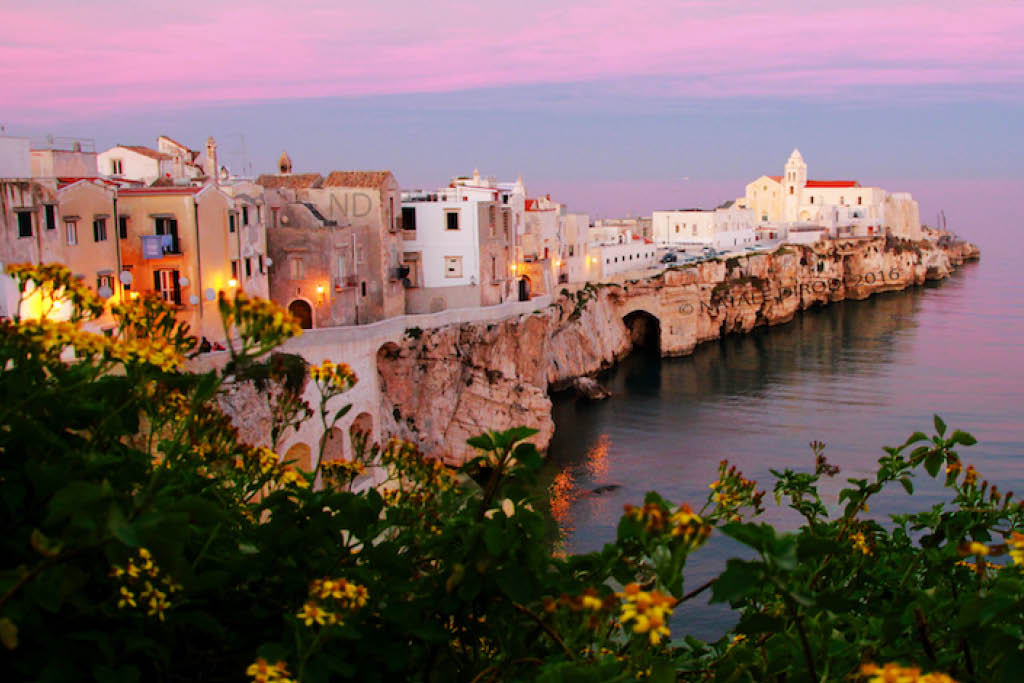 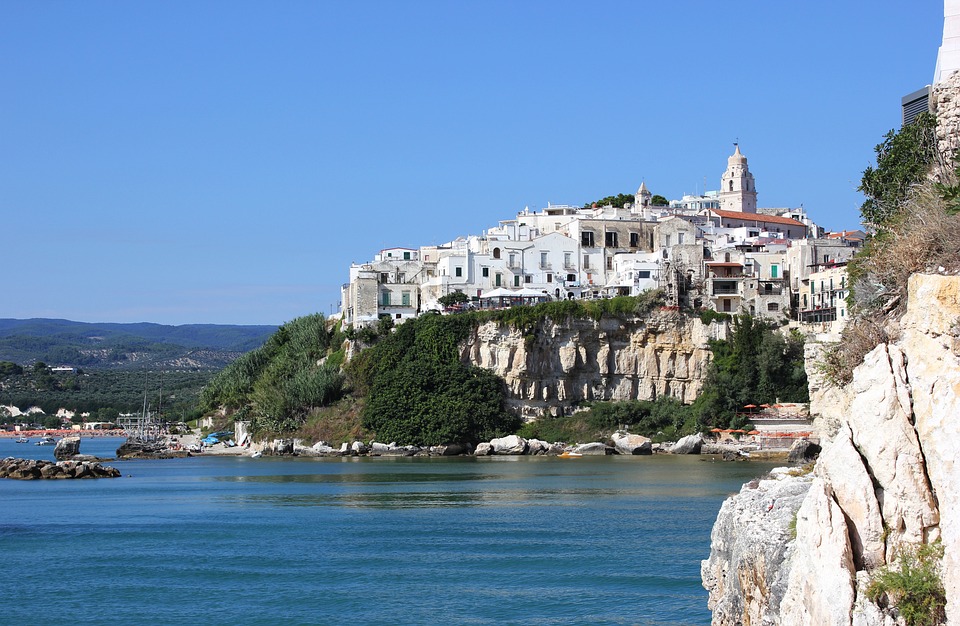 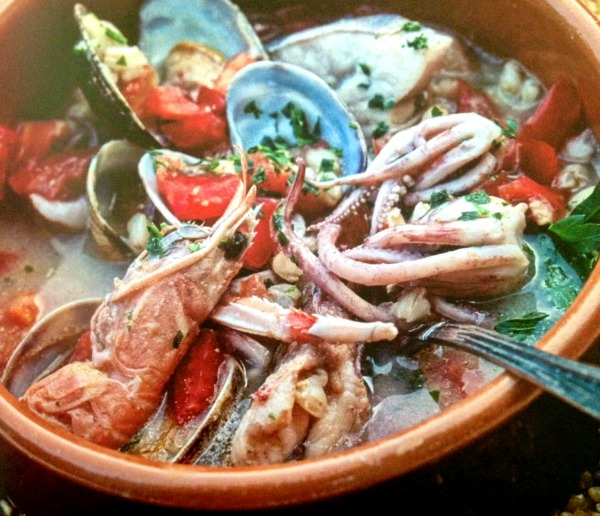 k’lustr (fried and covered Christmas sweets covered with honey and almonds), calzungidd (stuffed desserts) of chickpea and cocoa paste), the castaggnedd (biscuits with almonds and cocoa), the mustazzul (biscuits with cooked wine and cloves), the (biscuits with sugar glaze,) the chickpea jam, the pettole, troccoli, dried tomatoes in oil, orecchiette with turnip tops and taralli with fennel and white wine. 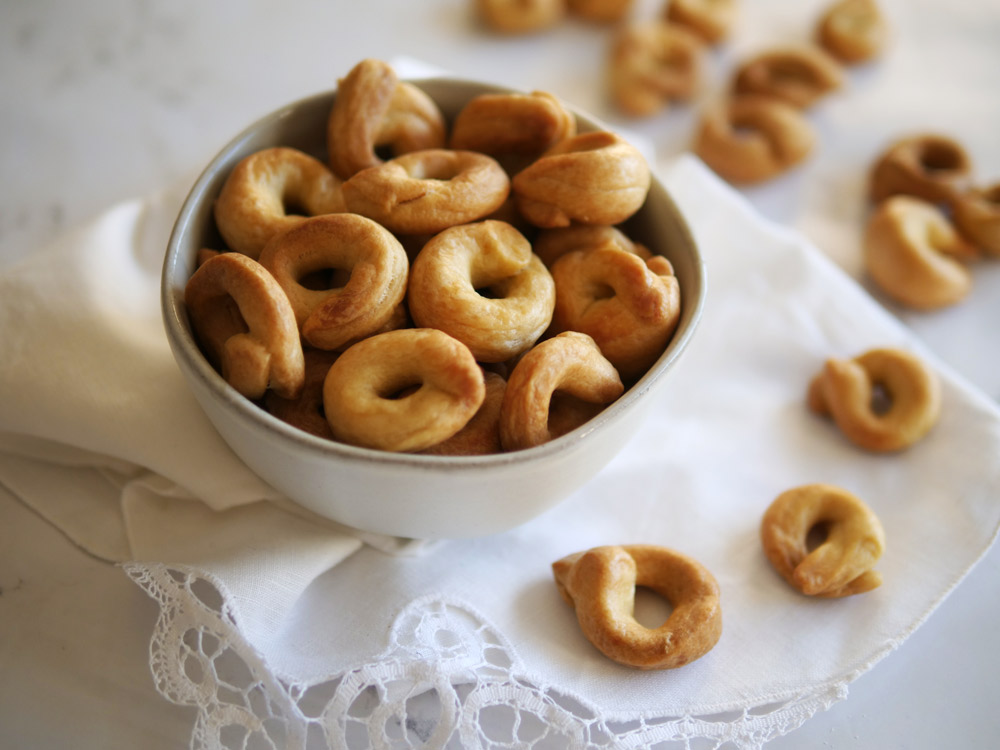 Some traditional local cheeses [13] are made with Podolica cow’s milk.

Another important and characteristic product of the Viennese territory is extra virgin olive oil which is produced in good quantity and excellent quality.