Tuesday 28 May - Originally, the 16th stage on the Giro would have tackled the illustrious duo Gavia/Mortirolo, but the first climb is remove due to an avalanche threat. The start remains in Lovere though, while the new route amounts to 194 kilometres. The finish lies at the end of a false flat of 16 kilometres in Ponte di Legno.

Due to an avalanche threat the Gavia has been removed from the original route. The Passo Manghen – at 2,047 metres and included on stage 20 – will be the new Cima Coppi. The new route of the 16th stage features 4,800 metres of climbing.
The stage start's uphill at Lovere, then negotiates the passes over the Presolana and the Croce di Salven. The route then follows the Val Camonica as far as the town of Cedegolo, where the Cevo, a climb new to the Giro d'Italia d'Italia, begins. At Edolo the route turns towards the Aprica via Santicolo. The descent to Tirano is followed by the Adda valley as far as Mazzo di Valtellina, where the riders embark on the Mortirolo on the classic side with gradients of up to 18%. After the descent to Monno, the route rises for the final 15 km on shallow gradients (3-4%) to the finish line. 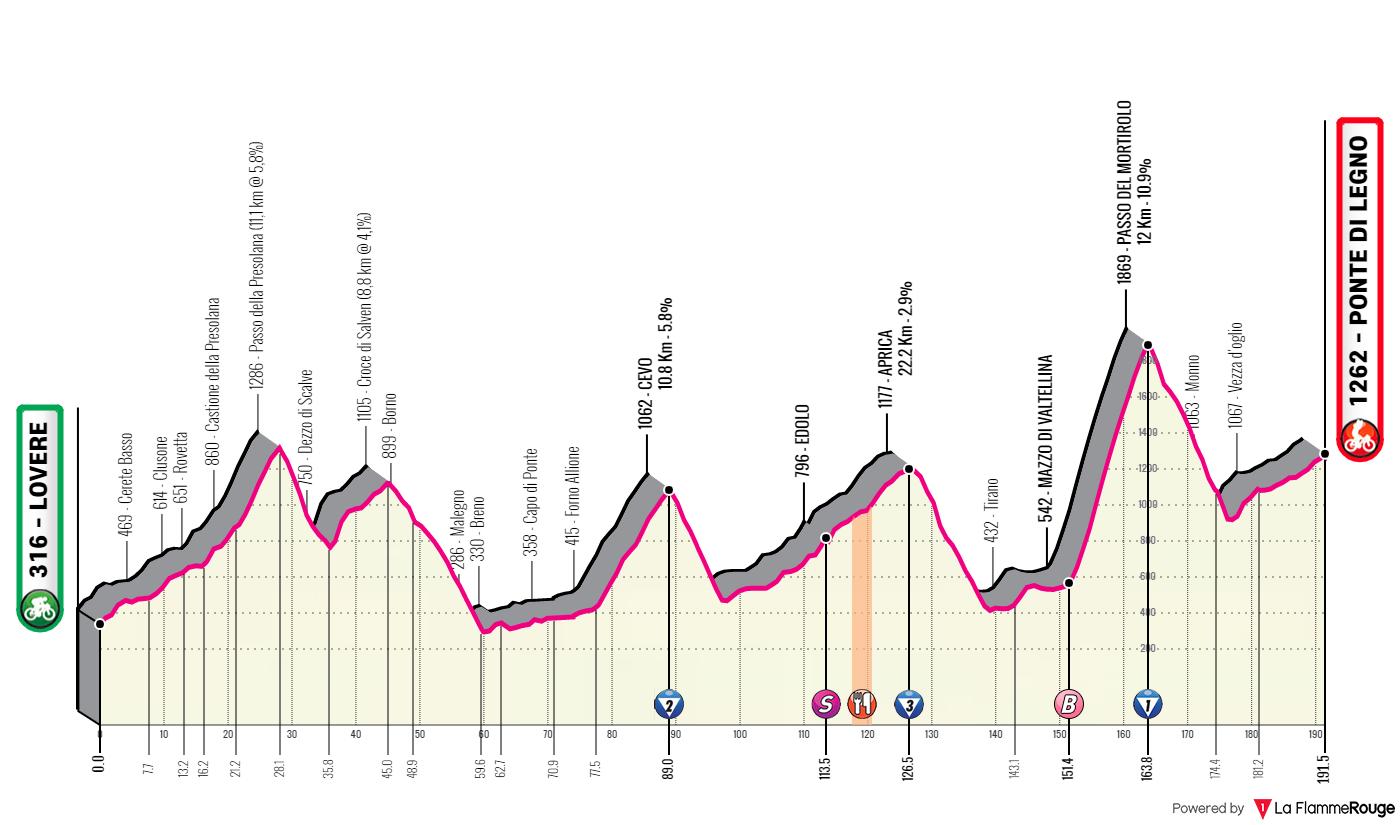 So, with the Gavia no longer included in the stage, the spotlight falls upon the RCS's re-routing and replacement climbs.
The Cevo is a new climb to the Giro, which is kind of understandable, given it's statistics and the alternatives in the area.
It has an extremely steady and unspectacular gradient, constantly hovering around the 6% mark and with just one km exceeding 7%. 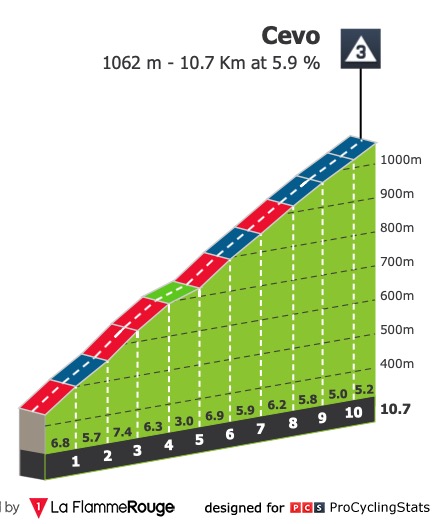 Next up needs little introduction, being the long shallow drag up to Aprica. But for a single, short ramp, early on, gradients are mostly around 3%. Best remembered for Basso's 2006 demolishing of the field (although after Mortirolo) and Gilberto Simoni's post stage ET comment. 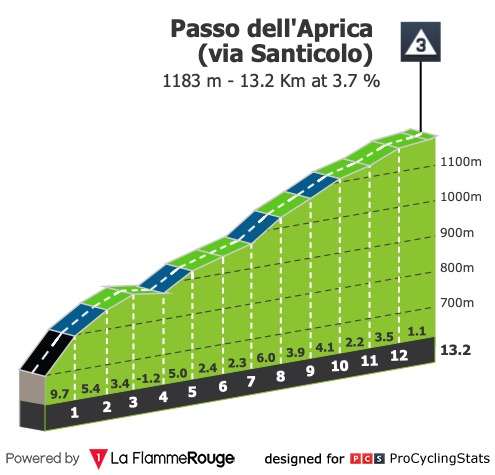 The race descends to the valley of the Adda river to tackle the Passo di Mortirolo. Located at 1,854 meters, the pass was a dust road until 1990, but when it was paved at last the pass became stuff for legends in an instant. The route takes in the ascent from Mazzo, which is the toughest side: 12.8 kilometres and an average gradient of 10.1%. Four kilometres up the climb and the riders tackle ramps up to 18%. It is part of the section between kilometre 3.5 to kilometre 9.7, which is averaging a brutal 12%. The Mortirolo is ruthless without one moment of rest. The riders descend into the valley to head to Ponte di Legno on a section of 15 kilometres with shallow gradients.
That prolonged false flat is going to hurt after such hard climb.
Final kilometres The final kilometres in urban Ponte di Legno are played out on narrower roads, with many 90-degree bends leading into wider avenues, heading for the finish. The home straight (300 m) is on 6 m wide asphalt road.

Located on the splendid western shore of Lake Iseo, since 2003 Lovere has been included in the prestigious club of “The Most Beautiful Villages in Italy” thanks to its considerable well-preserved artistic and cultural heritage. It was once described by the English writer Lady Wortley Montagu as “the most beautifully romantic place I have ever seen in my life”. The small town is rich in history and has a certain fascination that over the years has made it one of the most renowned and highly thought of lake resorts in Lombardy. Lovere’s most popular tourist attractions are the 15th century St. Mary’s Basilica in Valvendra, the Gallery of the Tadini Academy rich in work of arts such as the “Stele Tadini” and the “Religione” by Antonio Canova, the imposing Civic Tower with its interior impressive ascent, the Saints Gerosa and Capitanio’s Sanctuary and the marina, among the largest and most modern port structures on a European lake.
Nestled between the lake and the mountains, the town looks like a large amphitheatre with splendid palaces built with good taste and perfect architectural sense. Among these, the most important is undoubtedly the building that houses the Tadini Gallery of the Academy of Fine Arts (1821-1826), in which there are some important works by Antonio Canova: the rare terracotta sketch of Religion and the Stele Tadini, among the latest and most beautiful works of this great sculptor.

The old town is remarkable and well preserved. Starting from Piazza Tredici Martiri, the most beautiful of the Lombardy lake squares, and crossing the district of “beccarie”, you will reach Piazza Vittorio Emanuele II with the imposing Civic Tower, which recently underwent redevelopment involving the creation of an inside path leading to the top to discover the history of the town and enjoy stunning views of Lovere and the lake from the top. The medieval fortifications still visible in the village include the Soca Tower (sec. XIII-XIV), the Tower of Alghisi (sec. XII-XIII) and the Torricella of the ancient walls. Continuing the climb you’ll arrive at the Church of Saint George (late fourteenth century). In addition, the deserve a mention the monastery of Santa Chiara and the Sanctuary of the Saints Capitanio and Gerosa, destination of many pilgrimages.
The splendid 14th century Basilica of Santa Maria in Valvendra is also located within the Renaissance village. The new Cornasola marina, the largest of the lake, with its modern facilities, provides the perfect and most memorable backdrop to enjoy splendid outdoor activities including swimming, windsurfing, rowing, sailing and canoeing immersed in nature.

Lovere and its surroundings offer typical products for all tastes: from local cheeses to olive oil produced from sun-kissed local hills, from “casunsei” (Bergamo ravioli served with melted butter and sage) to the excellent lake fish (trout, whitefish, bleak, pike and tench) and polenta, served hot or grilled, but always strictly yellow. Here, polenta has a historical record: a captain of fortune returned from the Americas, Pietro Gajoncelli, was the first man who cultivated corn at the beginning of 17th century. He sowed in his field some grains of corn that multiplied so much that it became a widespread cultivation in the territory, that’s why the people of Lovere, since then, are called “pulentì”. The dessert, prepared with cornflour, is the Cake of Lovere. 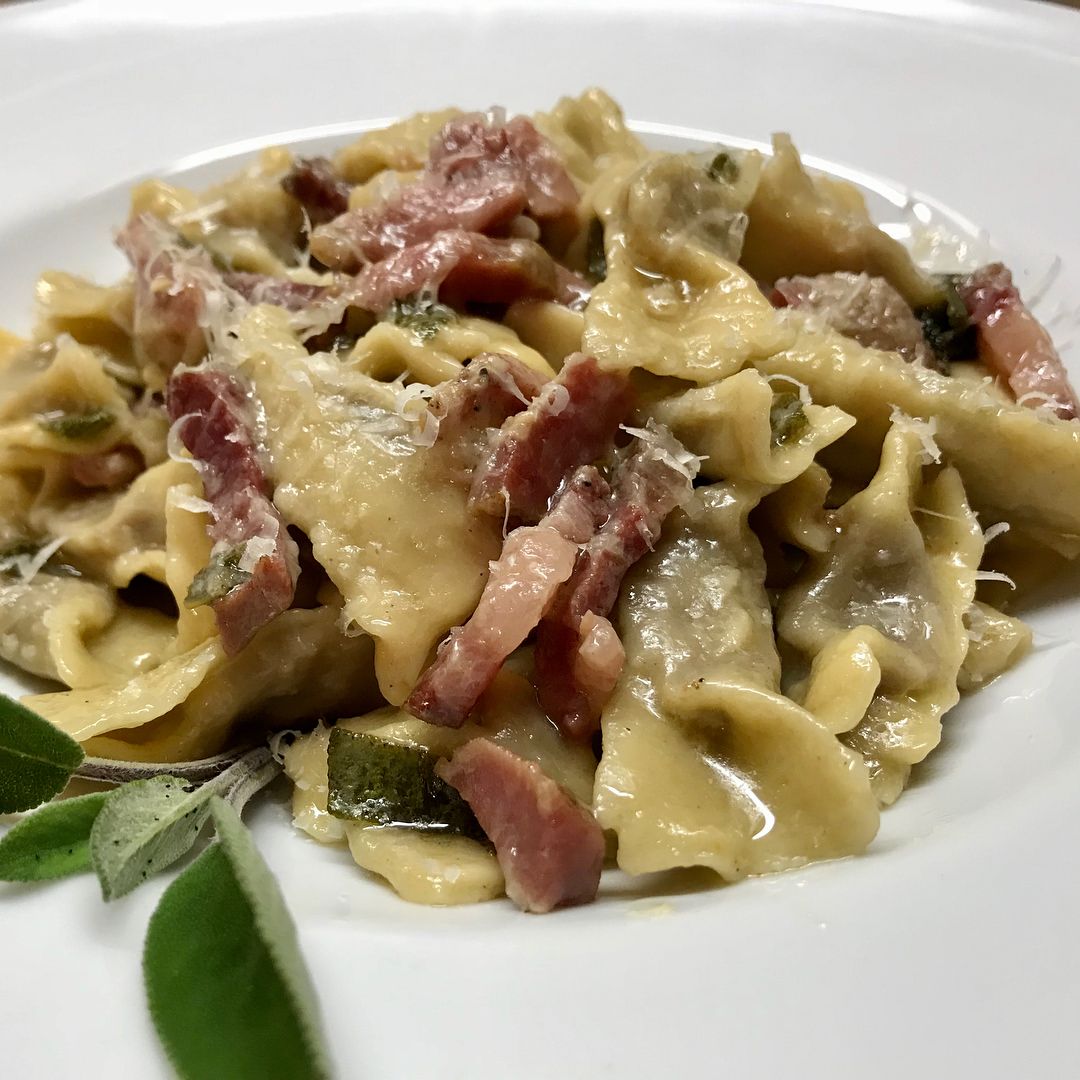 Ponte di Legno is a small jewel set among imposing mountains of great charm in all seasons. The name of the village – located in Lombardy, in the upper Valle Camonica (province of Brescia), on the border with Trentino Alto Adige – recalls Winter to many people, perhaps because it was first mentioned in 1912 by the Italian Touring Club which described it as “The first Italian resort for tourism and Winter sports “. On September 27, 1917 the village was bombarded by Austrian cannons and razed to the ground in a short time.

In Summer, Ponte di Legno offers a great deal to road bikers, thanks to the historic exploits of cyclists who have consecrated the names of Passo Gavia and Passo Mortirolo to history. It all started in 1960 with Imerio Massignan who was the protagonist of the first ascent to Passo Gavia, he was the first to ride across the Passo but he lost the stage due to three punctures. This is how the legend of this beloved Passo was born.