The 12th stage of the Giro d'Italia runs from Cuneo to Pinerolo and amounts to 158 kilometres. The mountains finally start, with the toughest climb is crested with 32 kilometres remaining, although the finale is pepped up with a steep and cobbled ramp. 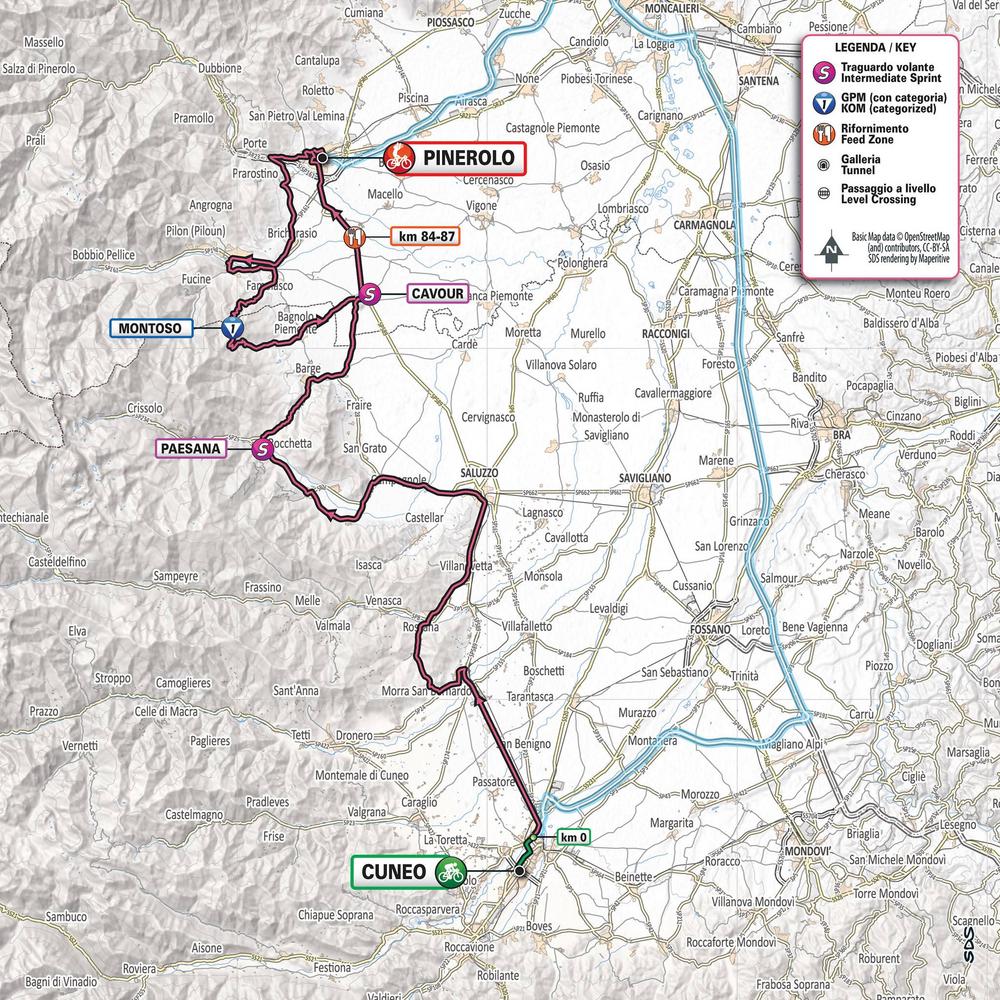 It is seventy years ago since Fausto Coppi won the Giro d’Italia and the Tour de France for the first time in the same year. He did it again in 1952, but it was also in 1949 that Il Campionissimo left his rival Gino Bartali by 11 minutes on a 254 kilometres route between Cuneo and Pinerolo. He rode 192 kilometres alone through the Alps to set up that year’s GC victory. 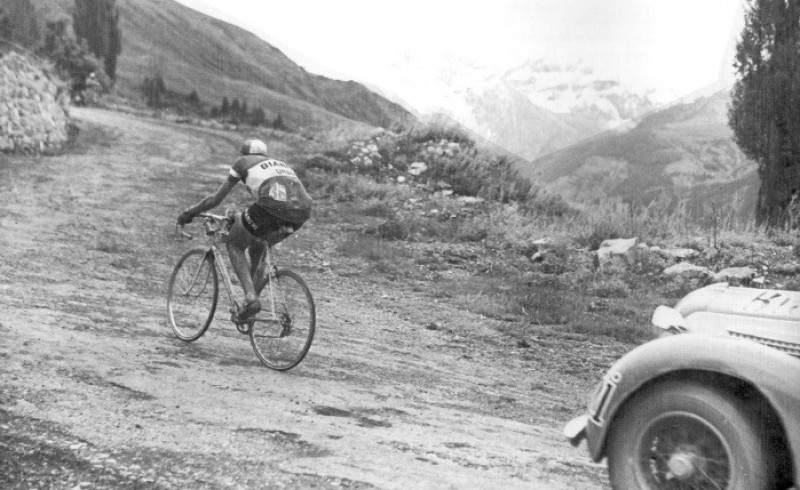 Obviously, given the distance of 158 kilometres, the 12th stage on the 2019 Giro d’Italia could not include all the same climbs – Col de la Madeleine, Col de Vars, Col d’Izoard, Colle del Monginevro and Sestriere.
The 2019 race covers far easier climbs on the road to Pinerolo. However, the Montoso (GPM1, 8.8 km at 9.5%) climb has never been ridden in the Giro. It is by far the biggest challenge the riders had to face up to now, featuring 6 km consistently over 10% on a narrow road.

The top is at 32 km to go, the first 10 being a wide but technical (and steep) descent to Bagnolo, where the road will become pan flat. Here the riders will reach Cavour again and repeat the same route they made earlier. From Bagnolo to the wall there are 19 km an flat and straight roads.

2,500 m before the finish, the route takes a sharp left-hand turn and climbs up the narrow Via Principi d’Acaja (450 m with an average 14% gradient and peaks of 20%, on road pavers).

Next is a steep and harsh descent leading into Pinerolo. The last 1,500 m are on level roads, with just a few bends and a short stretch on stone-slab paving. The finish line sits at the end of a 350 m long homestretch, on 8 m wide tarmac. 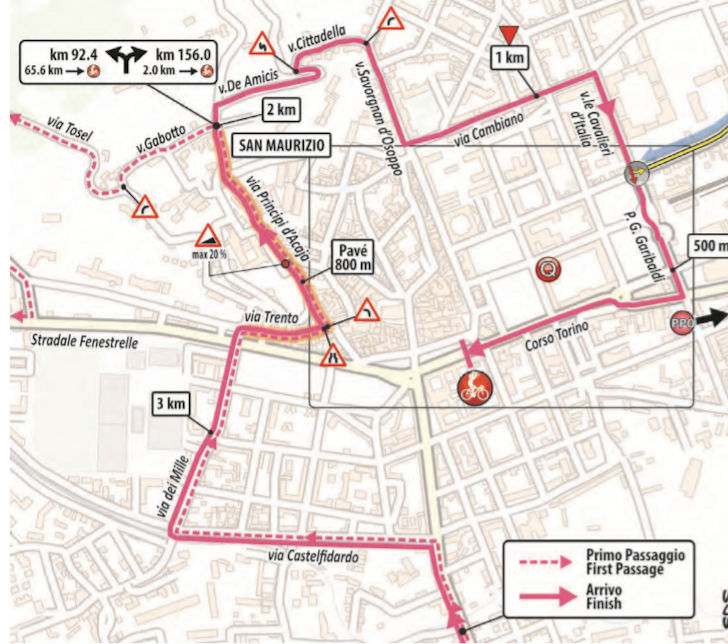 Cuneo, founded in 1198, takes its name from the wedge-shaped plateau (534 m) where it is located, at the junction between the Gesso stream and the Stura river. Piazza Galimberti is the heart of the town with its traditional Tuesday market and Museo Casa Galimberti.
The historical centre was restored and among the civil buildings that deserve a visit, we suggest the Town Hall and the Civic Tower, where you can enjoy a delightful view of the Alps. The ancient church and monastery of San Francesco houses the Civic Museum. The Gesso and Stura Rivers Parkland currently covers an area of some 4,000 hectares and it includes 10 different municipalities; it represents a link between the mountain area and the plain.

Do not miss the chance to taste: the flavorous chocolate and rum pralines called “Cuneesi” (which were also highly appreciated by Ernest Hemingway, as he came to Cuneo in 1954), Cuneo salami, P.D.O. cheeses, marron glaceé, chestnut Cuneo cakes, smoked trouts. 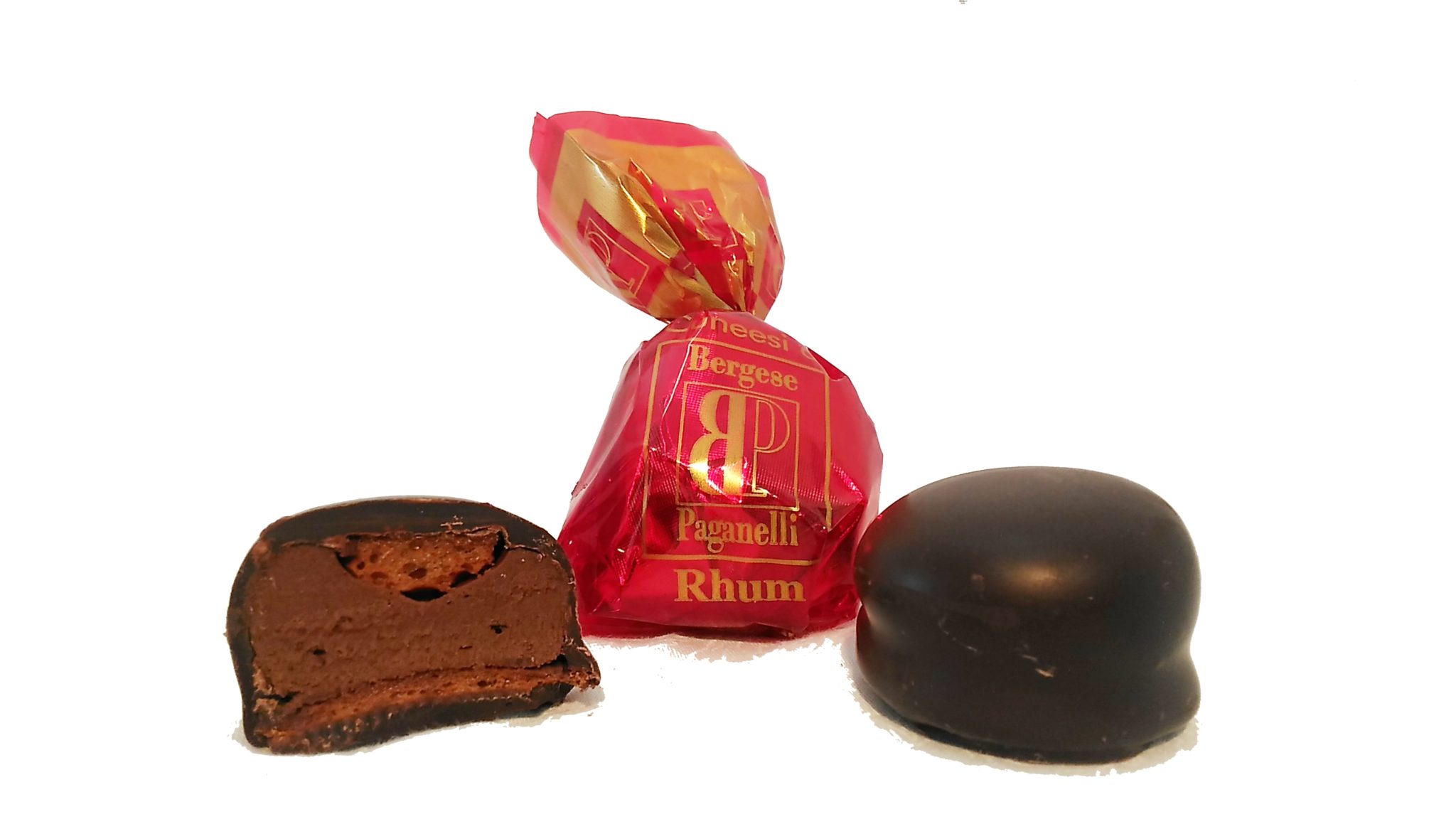 Pinerolo (Pinareul in Piedmontese, Pineiròl in Occitan, Pignerol in French, Pinarolium / Pinerolium in Latin) is an Italian municipality of 35 944 inhabitants of the metropolitan city of Turin.To visit the city means to discover its medieval heart, its history of Savoy, the three French dominations until the birth of the School of Cavalry. The city, center of an area called Pinerolese, has been influenced by french culture, traditions and history. Pinerolese, that extends from Turin to France, has got a strong identity and a beautiful cultural heritage. In this area a lot of religious battles took place, whose tracks are still visible, and now different confessions coexist. During this tour you will see the most important buildings of Pinerolo and its neighborhood.
City Center: Pinerolo is famous for its medieval history and its legends. In the old town stones and manuscripts tell stories about important characters of the past, as Acaja, Ortensia of Piossasco and the Iron Mask. Visiting Pinerolo you can feel the medieval atmosphere, admiring ancient buildings, hidden courts and medieval houses. From Saint Donato’s Cathedral, through Via Principi D’Acaja you will reach Saint Maurice square, where you can see a beautiful view of town and plain on one side and of Waldesian Valleys on the other side.

/ Le mele di Cavour Meat and sausages: mustardela. Unmissable: bagna caoda, boiled mixed Piedmontese, braised in Barolo. Typical dishes of the Waldensian cuisine: planar, capounet, cabbage leaf rolls and the lou tourtel potato omelette. Among the first courses, the supa barbetta, with its variations, the polenta dousa and the traditional calhiettes (is of the Germanasca val) made with grated potatoes, sausage cooked in milk and onions. Liqueurs: Genepy.
"Science is a tool for cheaters". An anonymous French PE teacher.
0
«1234»