Here they are. Finally, the first of two stages we have all been waiting for....................just to get them over and done with.
In effect, a 300km billiard table.
At 145 kilometres, the 10th stage of the Giro d'Italia travels from Ravenna to Modena. The route is pan-flat, so this is a perfect opportunity for fast finishers.
Ravenna has not been included in recent years. In fact, in 2005 and 2011 the town in the northeastern part of Italy served as a finish. On both occasions the race came down to a sprint – in 2005, Alessandro Petacchi powered to the win, and in 2011 it was Mark Cavendish who outgunned the bunch.

This time the Giro starts in Ravenna, although the outcome is likely to be the same. Following 147 kilometres on the flat the riders arrive in Modena. The good news that will thrill the riders still further is that street furniture will be found in all the urban areas, along with roundabouts, traffic dividers, speed bumps and the likes, along the entire route.

The historic town in the Po Valley is filled with beautiful architecture, like the Modena Cathedral, the Ducal Palace and the enchanting Piazza Grande, but it is first and foremost Enzo Ferrari territory. The founding father of the Ferrari automobile marque was born in Modena and rarely left the town and nearby Marenello.

Modena hasn’t seen a Giro d’Italia finish in ages, although the town hosted a number of departures in the last seven years. In 2012, the riders set off to Fano (Mark Cavendish win), in 2014 to Salsomaggiore Terme (Nacer Bouhanni), and in 2016 to Asolo (Diego Ulissi).
Final kilometres The final kilometres are played out on broad and mostly straight roads. Over the last 5 km, the only bend is 2,200 m from the finish. Porphyry stone pavers cover a 450 m stretch, from 1,500 m to the finish almost to the red flag. The home straight is 1,500m long, on 8 m wide asphalt road.

Ravenna is located in the north-east of the Italian peninsula, just a few kilometres from the Adriatic Sea. Its province covers the southern part of Romagna and extends from the sea to the gently rolling foothills of the Apennines. Ravenna, the city of mosaics, has been recognised as a world heritage by UNESCO: eight historic buildings are on the World Heritage List.
he spirit of this city, admired for the splendour of its artistic heritage, may be fully appreciated only when the tie with the surrounding waters and territory that build its identity is understood. The relationship between Ravenna and the sea was once stronger than today. During Roman times and the Middle ages, part of its city centre was run by streams of water and rivers that defined the different districts as if they were little floating islands. Then, the coastline was nearer, where now the railwaystation is; all around, a network of valleys and swamplands made the city impregnable to any enemy. Another important aspect that made transfer the capital of the Western Roman Empire from Milan to Ravenna, where it remained for three centuries, under the Gothic Kingdom of Theoderic and the Byzantine Empire of Justinian for three centuries. Ravenna’s identity resides also in the nature: the Pine Forest of Classe and the Pine Forest of San Vitale tell about the century-old history and traditions of this land, where some traces of the old lagunas and wet areas can still be seen in the surrounding landscape. This deep connection marks and can be perceived also in the city centre, showcase of outstanding treasures. Eight of its monuments have been inscribed by UNESCO in the World Heritage List and anyone who visits them carries an unvaluable memory of the wonder of its mosaics and decorations.

Beyond the suggestive cultural and natural heritage, Ravenna is also a city that boasts an old food tradition. The art of good food is deeply rooted in the farm knowledge of Romagna territory. The traditional menus include tasty handmade first courses such as tagliatelle, lasagna, strozzapretti, passatelli made with parmesan cheese and eggs, cappelletti with a cheese-filling, along with fish second courses or grilled mutton. 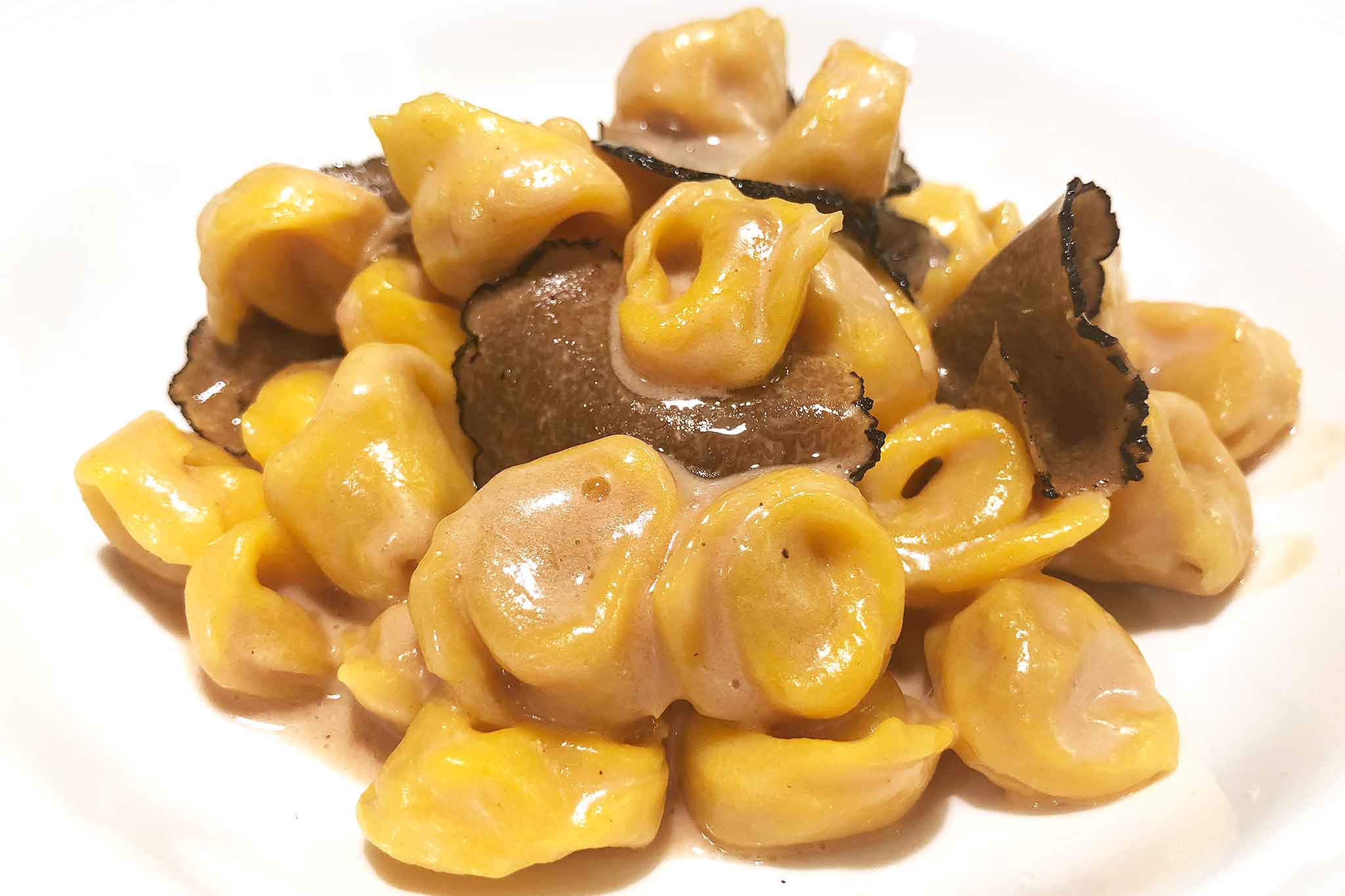 Everything is accompanied by fine wines coming from the surrounding hills. Not to forget piadina – the “bread of Romagna”, filled with Squacquerone, a local buttery soft cheese or with savoury cold cuts.

Modena is a shrine of treasures to be discovered without haste, surprising travelers with a magical interweaving of art, gastronomy, music and motors. Located between the Secchia and Panaro rivers, in the heart of Emilia-Romagna, the city boasts a Unesco World Heritage Site (Duomo, Piazza Grande and Torre Ghirlandina) and it’s recognized as an inspiring land, attracting talent and passion, giving birth to celebrities admired all over the world such as Enzo Ferrari and Luciano Pavarotti. Modena is a land of engines with big brands such as Ferrari, Maserati and Pagani and it has also long been known for its cuisine, a reputation earned for authenticity, respect for tradition, and attention to the conservation of genuine flavor and its the Italian province richer in products with PDO and PGI denomination of origin.
The Cathedral, declared, with the Ghirlandina Tower and Piazza Grande, World Heritage Site by UNESCO in 1997, is a masterpiece of Italian Romanesque. The seventeenth-century Palazzo Ducale which housed the Estense court, which moved from Modena from Ferrara in 1598 and that it’s now home to the Italian Military Academy. The Estense Gallery, one of the most important Italian collections of painting and sculpture, and the Estense Library, both custodians of works of arts of absolute value. The Galleria Civica, the Fondazione Fotografia and the Museo della Figurina with contemporary art and visual culture exhibitions throughout the year. For Bel Canto fans, the Teatro Comunale di Modena and the Casa Museo Luciano Pavarotti will be unmissable. Modena, the birthplace of Enzo Ferrari, is a Motor land. Here passion for powerful motors has a long tradition and legendary fast cars are an integral part of local culture. In addition to Museo Enzo Ferrari in Modena and to Museo Ferrari in Maranello, within a radius of a few kilometers, the visitor finds a wide range of museums and private collections dedicated to autos, motorcycles, and the world of racing: the Maserati showroom and factory, the Pagani factory and museum, the Umberto Panini classic cars collection, the Stanguellini Museum, the Righini collection and Autodromo di Modena racetrack.

In Modena you’ll will find a rich selection of fine food experiences offered by a network of restaurants, farms and artisans of taste that, with the preservation and enhancement of products and flavors, have been awarded in every field, such as the Osteria Francescana praised as one of the best restaurants in the world. Throughout the region you can visit farms producing Formaggio Parmigiano – Reggiano PDO, Lambrusco di Modena PDO and and many Sangiovese varietal wines, You can not leave Modena without having tasted Zampone and Cotechino Modena Igp, tortellini, gnocco fritto and the famous tigelle or crescentine. The Albinelli Covered Market, in Art Nouveau style, considered among the most beautiful in Italy, is certainly worth a visit.
"Science is a tool for cheaters". An anonymous French PE teacher.
0
«123»