The 6th stage of the Giro d'Italia travels on rolling to hilly terrain from Cassino to San Giovanni Rotondo. At 238 kilometres, the route is likely to lead to a day for the breakaway or a sprint of a selected peloton. The first 190 km take place on straight and broad fast roads, with a few tunnels along the way, but with no major climbs. The route then changes dramatically: the roads are narrower, and worn out at points.

The Giro visited Cassino in 2014. A crash in the town shook up the peloton just before hitting the final climb to Montecassino, the Benedictine Abbey on a rock plateau above Cassino. Michael Matthews, Tim Wellens, Cadel Evans and Matteo Rabottini survived the 8.6 kilometres ascent before crossing the line in that order.

Cassino is included in the 2019 Giro d’Italia as a start.

Although the route is hardly ever flat, it doesn’t feature any hard climbs either. A descending false flat of 50 kilometres runs to the foot of the biggest challenge of the day. The Coppa Casarinelle climb appears at kilometre 205. The route ascents 15 kilometres at 4.4% 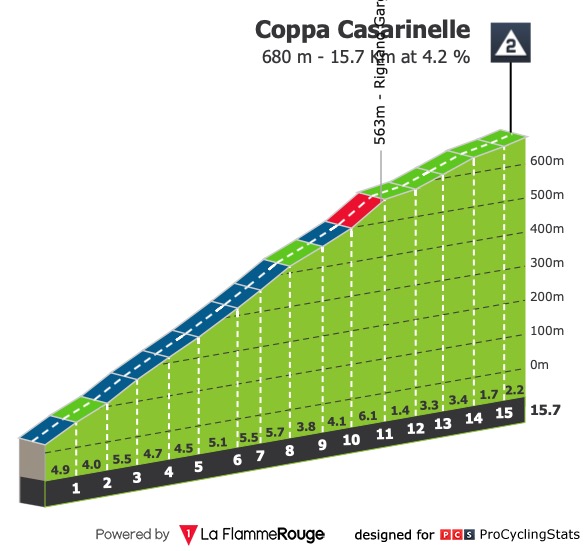 Downhill leads to the second intermediate sprint of the day, which is directly followed by another uphill kick – albeit a short one.
The last kilometres of the race are going either false flat up or false flat down. Following a short lap in San Giovanni Rotondo the final kilometre slopes at approximately 3%.

Cassino is a town in the province of Frosinone, central Italy, at the southern end of the region of Lazio, the last City of the Latin Valley. Cassino is located at the foot of Monte Cairo near the confluence of the Gari and Liri rivers. The city is best known as the site of the Abbey of Montecassino and the Battle of Monte Cassino during World War II, which resulted in huge Allied and German casualties as well as the near total destruction of the town itself. It is also home to the University of Cassino.

San Giovanni Rotondo is located on the slopes of Calvo Mountain, the highest summit in the promontory, in a valley in the centre of Gargano, at an altitude of 600 metres, 20 km away from Monte Sant’Angelo and 30 km away from Foggia. The small village, in the heart of Gargano National Park, is an important destination for international religious tourism, thanks to the priest Padre Pio from Pietrelcina, who lived and worked here. The most important place of devotion is the crypt of the Convent Santa Maria delle Grazie, which contains his relics and it is a pilgrims’ destination, nowadays kept inside the new complex planned by Renzo Piano.

The area is covered with olive groves, grape vines and fruit orchards and wherever you go you will see roadside stalls selling local produce. This region produces 50% of the country’s olive oil, and the village of Carpino is even known as “Oil City” on account of the quality of its extra virgin olive oil.

The Peninsula is just as famous for its seafood as for its fruit and olives. Much of the fishing is done in the coastal lagoons of Varano and Lesina: as you travel around look out for the trabucchi, traditional wooden fishing machines that are still widely used today. The main attraction of the area is its mussels and clams. But any restaurant will also serve you a meal of freshly caught fish, squid or cuttlefish, or the fish soup that is a speciality of the region.
A simple dish of tuna carpaccio.