The decisive final week of the Giro d'Italia starts with a bang. The Giro serves another race at over 200 kilometres on the 16th stage. The riders travel from Udine to San Daniele del Friuli on a hilly route of 229 kilometres. As a prelude to the Alps stage 15 serves a finishing circuit with three times the Monte di Ragogna. 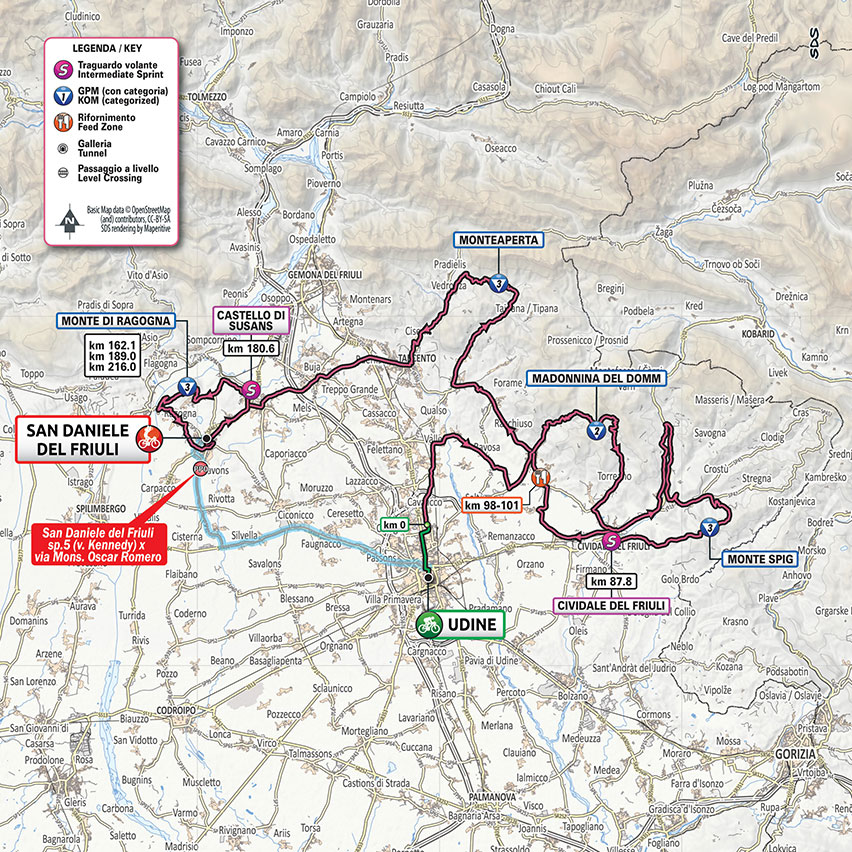 From the city of Udine the riders will have only 19 km of flat before starting the first climb of the day. The first 100 kilometres are played out to the east of Udine. The riders crisscross the areas close to the Slovenian border. 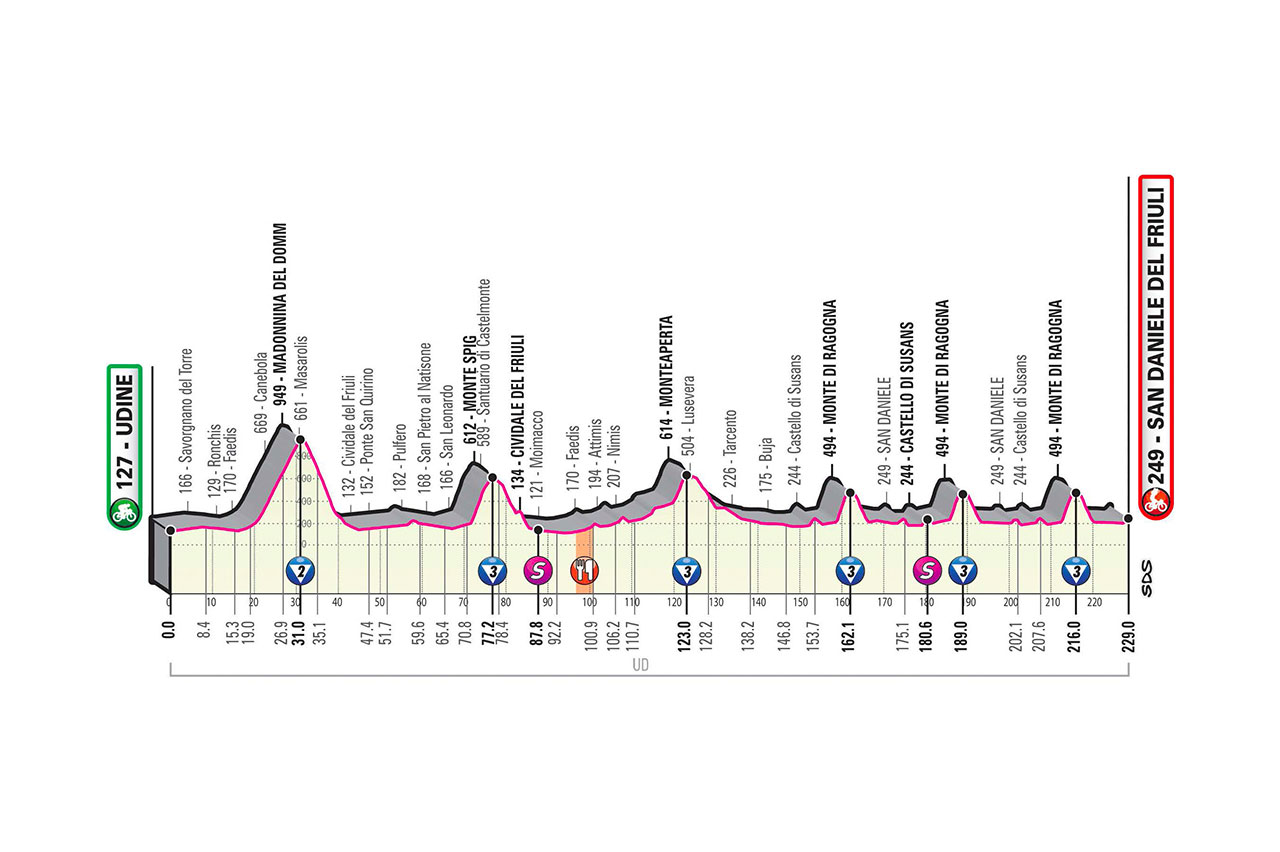 Madonnina del Domm (GPM2, 10.8 km at 7.1%), with almost 8 km at 8.8% before an easier final stretch, will definitely cause a great fight for the break of the day, both uphill and downhill, as the descent is very technical. 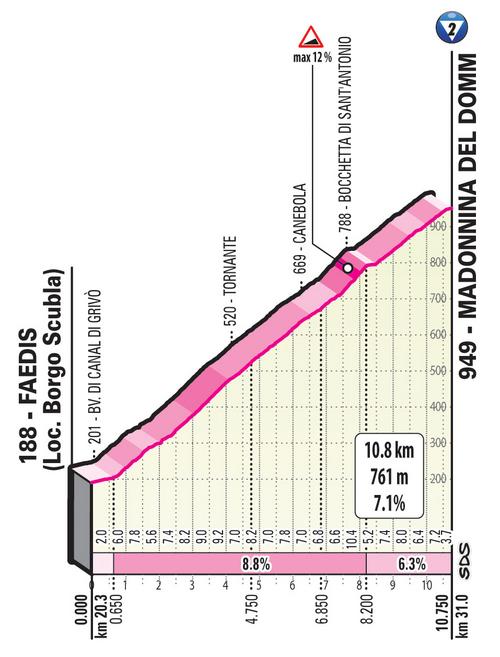 The riders will then reach the town of Cividale, from which the road will stay mostly flat for 25 km. The second GPM of the day is Monte Spig (GPM3, 6.4 km at 7%). 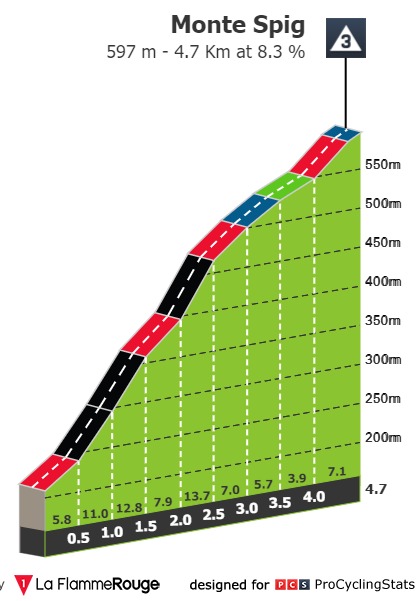 The easier descent brings the riders back to Cividale del Friuli, that features the first intermediate sprint. From there, 30 km of flat more before the third climb, Monteaperta (GPM3, 3.7 km at 7.4%). 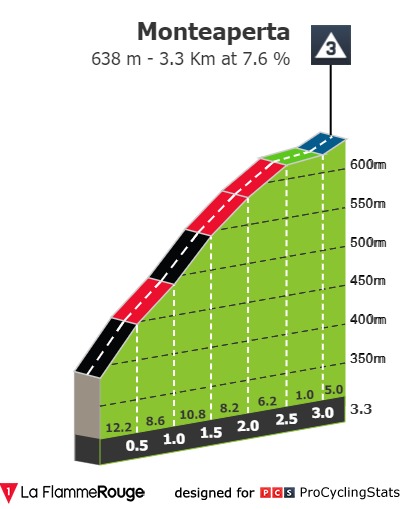 From its descent the peloton will head towards the final, tricky circuit, that is to be repeated three times. Each lap is 27 kilometres long. It features two more uphill kicks. The first one appears 5 kilometres into each lap. The 500 metres ascent to Castello di Susans goes up with a maximum incline of 14%, while the Monte di Ragogna is 2.8 kilometres long and the average gradients sits at 10.4%. The last time over this Wall comes at 13 kilometres to go. 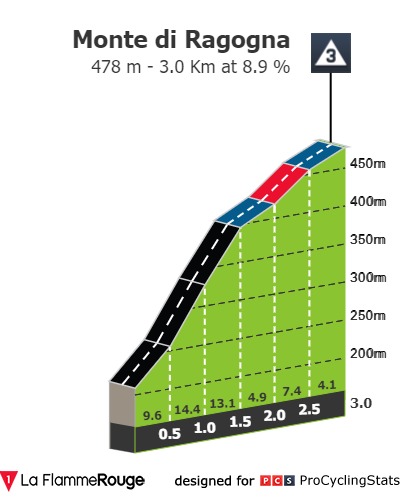 On rolling roads the route continues to the finale uphill kicker in the ultimate kilometre. The first 500 metres are steep – 18% max. – before the last 500 metres continue false flat to the line. 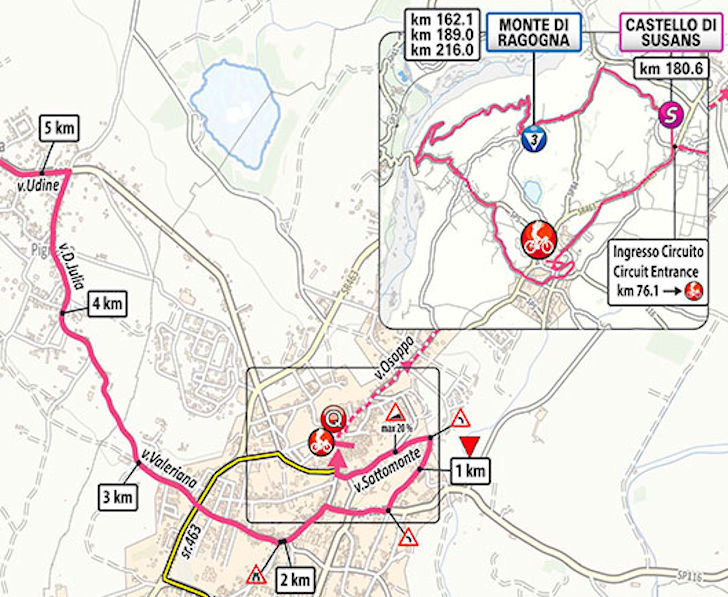 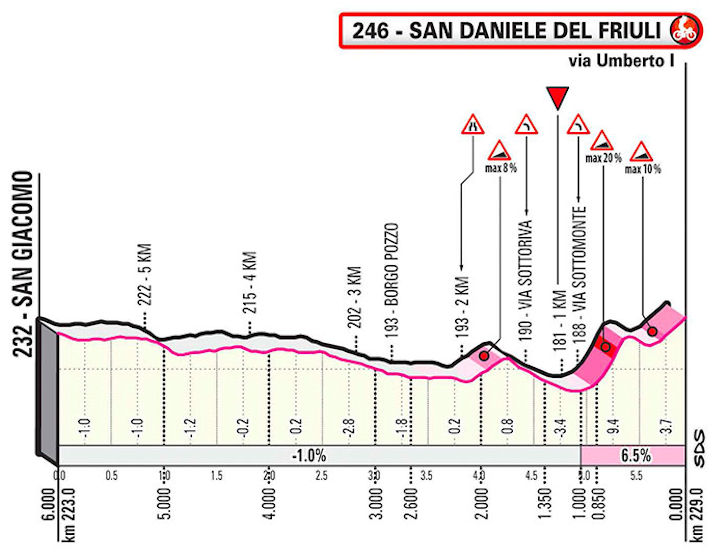 Udine is a town in the center of Friuli Venezia Giulia, a privileged geographical position, surrounded by hills, close to the sea and the mountains, not far from Austria and Slovenia, in the center of Europe. 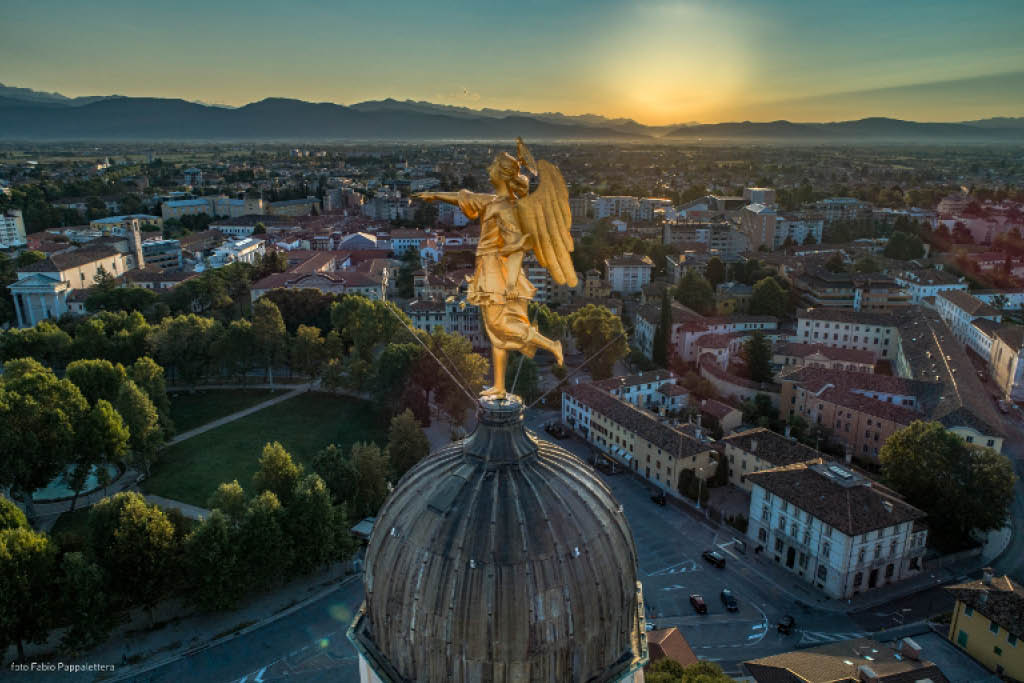 During the month of September the city hosts “Friuli DOC”: a journey into the most inviting taste and flavors of Friuli Venezia Giulia, a real mix of wines, food, events.

Udine is located in the “Friuli Grave” DOC area, which ranks first among the Denominations of Friuli Venezia Giulia with a production of over 300,000 hectoliters, equal to almost 50% of the total.
In the “Grave”, as in all Friulian viticulture, the wine bears the name of the grape from which it originates.
The wines of the white grape varieties are fresh, fruity and elegant; harmonious and fragrant reds when young, full and structured if aged.

For the first time in history, the Giro d’Italia will arrive in San Daniele del Friuli, a town located in the heart of Friuli-Venezia Giulia and which, despite its small size, is one of the most important villages in the region. 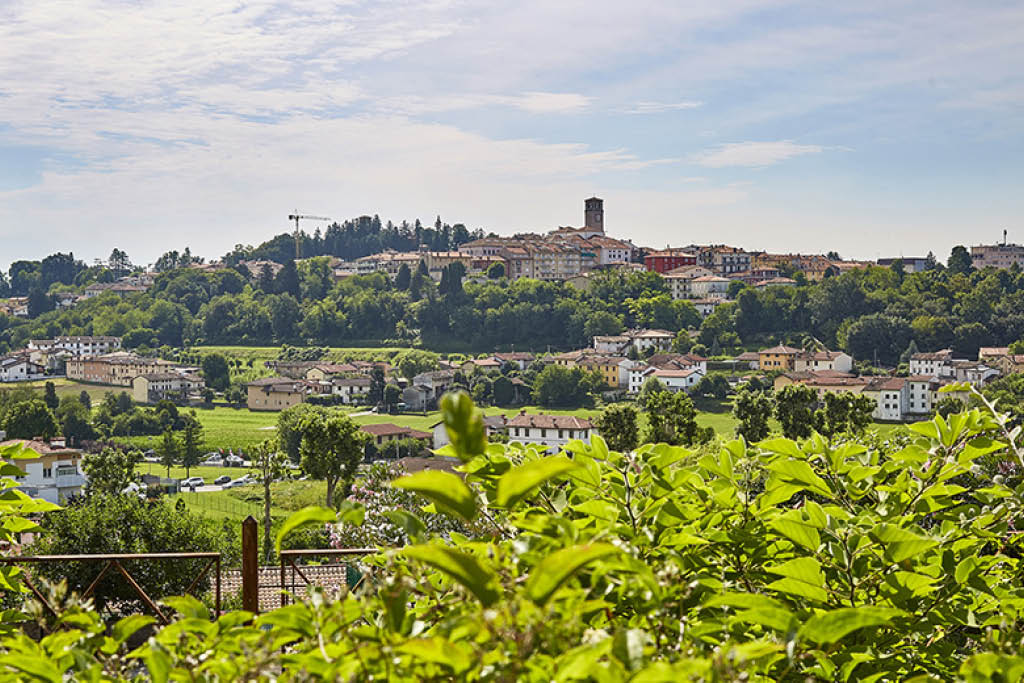 San Daniele del Friuli is famous and known all over the world for the main product of Friuli-Venezia Giulia: the San Daniele DOP. An Italian product that originates from Italian pork legs worked and seasoned only and exclusively in this municipality. The perfect microclimatic conditions allow the pig legs to mature to perfection to obtain San Daniele, a Protected Designation of Origin product since 1996. In the municipal area there are only thirty-one producers of the over 2 million and 600 thousand hams. Prosciutto di San Daniele is made with only three ingredients: pork legs, sea salt and a maturation of not less than 13 months. 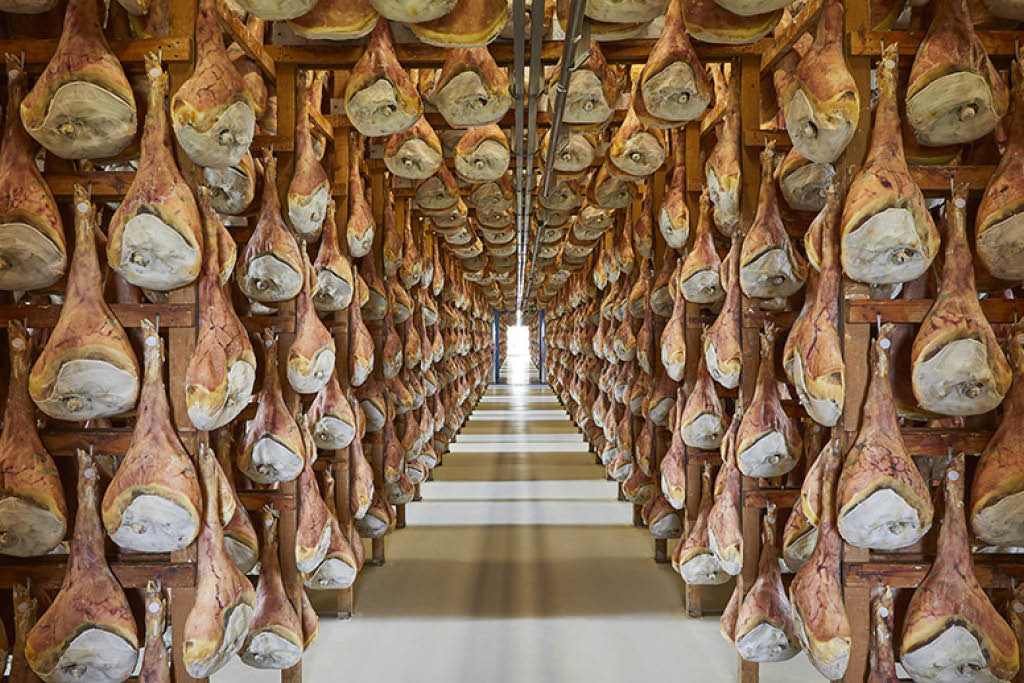 Prosciutto di San Daniele is eaten sliced ​​thin at the moment, or used in numerous preparations such as “Tagliolini alla San Daniele”, a typical and characteristic dish of the town. 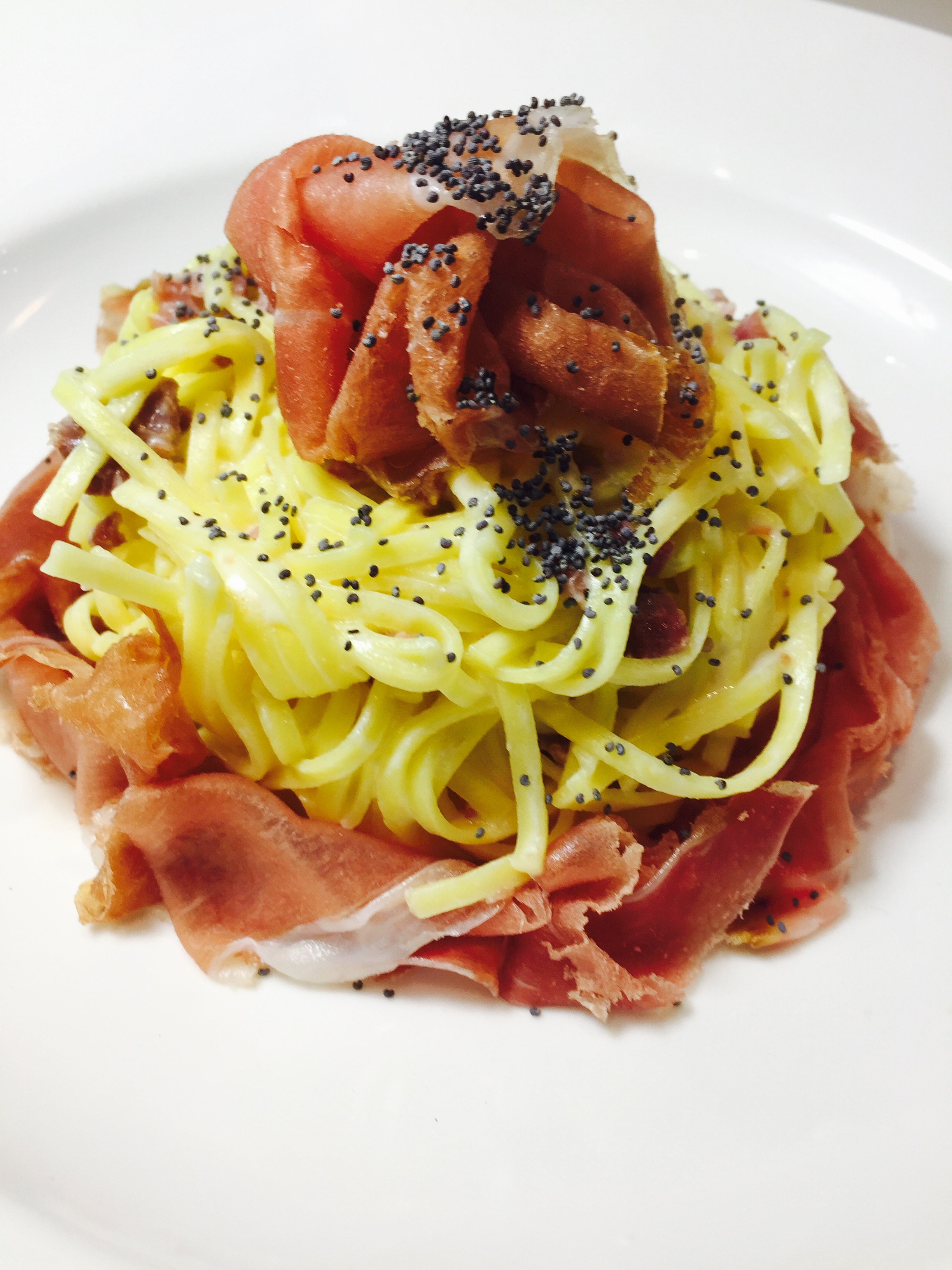