The Giro d'Italia serves its second individual time trial on the thirteenth day of action. The hilly route amounts to 34.1 kilometres and features a wall-like climb of 1.1 kilometre at 12% early on.
From Conegliano to Valdobbiadene, start and finish are exactly the same as the ITT of the Giro 2015, except that that one was 59 km long. How times have changed! 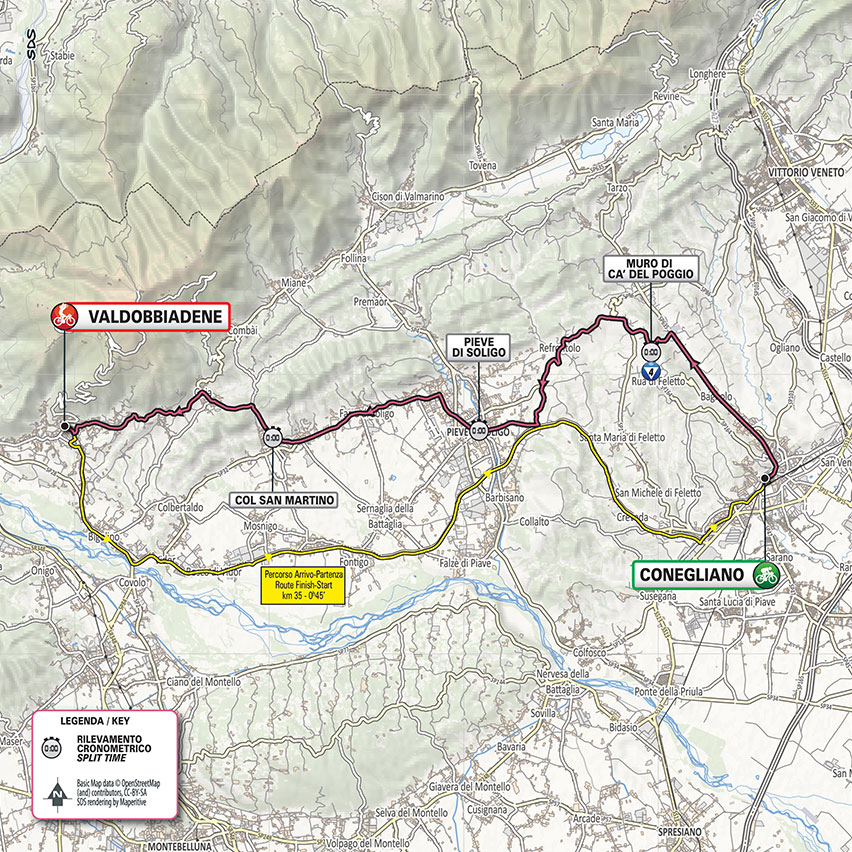 The start ramp is located in Conegliano, a town of 35,000 people which is dominated by the ruins of a 10th century castle. The town also hosted the start of Queen Stage of the 2011 Giro, which was won by Mikel Nieve. 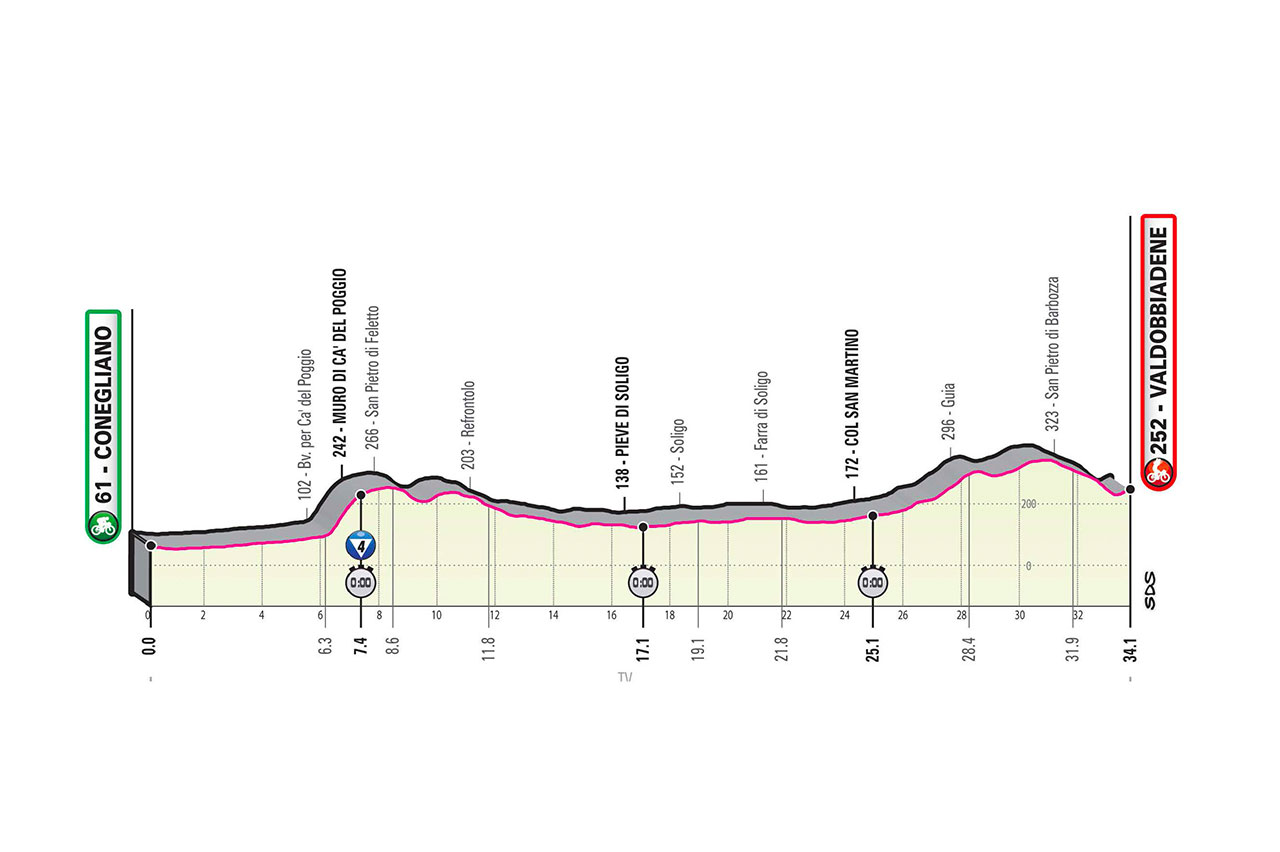 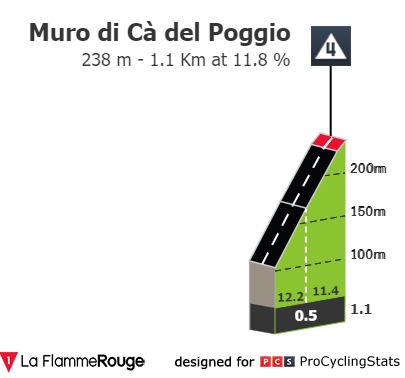 The next sector measures 10 km of twisty but flattish roads up to the second checkpoint in Pieve di Soligo, after which the road gets easier until the third checkpoint in Col S.Martino. A false flat uphill of 5.5 kilometres takes the riders to the highest point on the route at roughly 350 metres before a 3 kilometres descent leads into Valdobbiadene. The final section is a short kick-up to the line. 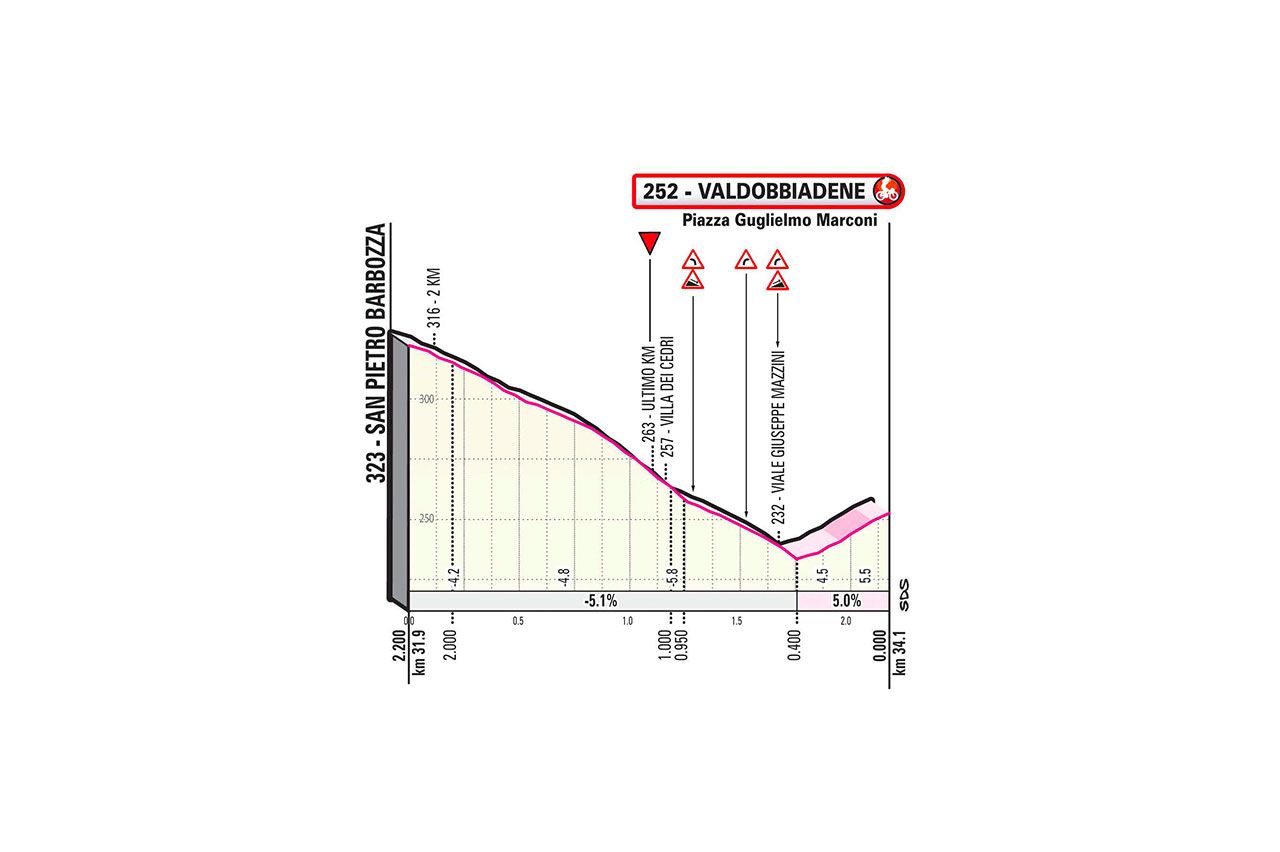 This is the reason why some TT specialists are here, but they will have a tough time trying to better the flying Filippo Ganna. 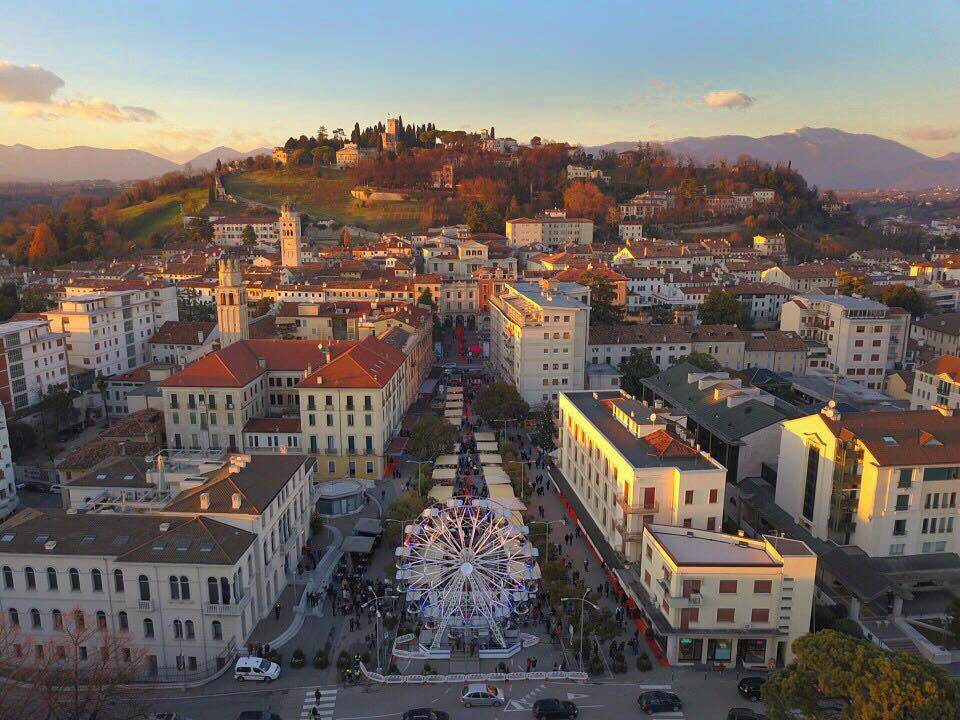 Conegliano is a walled town built around its medieval castle, whose Renaissance splendour is still etched in its noble palaces and painted façades. n its historic centre the Duomo (Cathedral) is well worth a visit: it contains one of the artist’s most famous works, the “Madonna and Child Enthroned with Angels and Saints”. 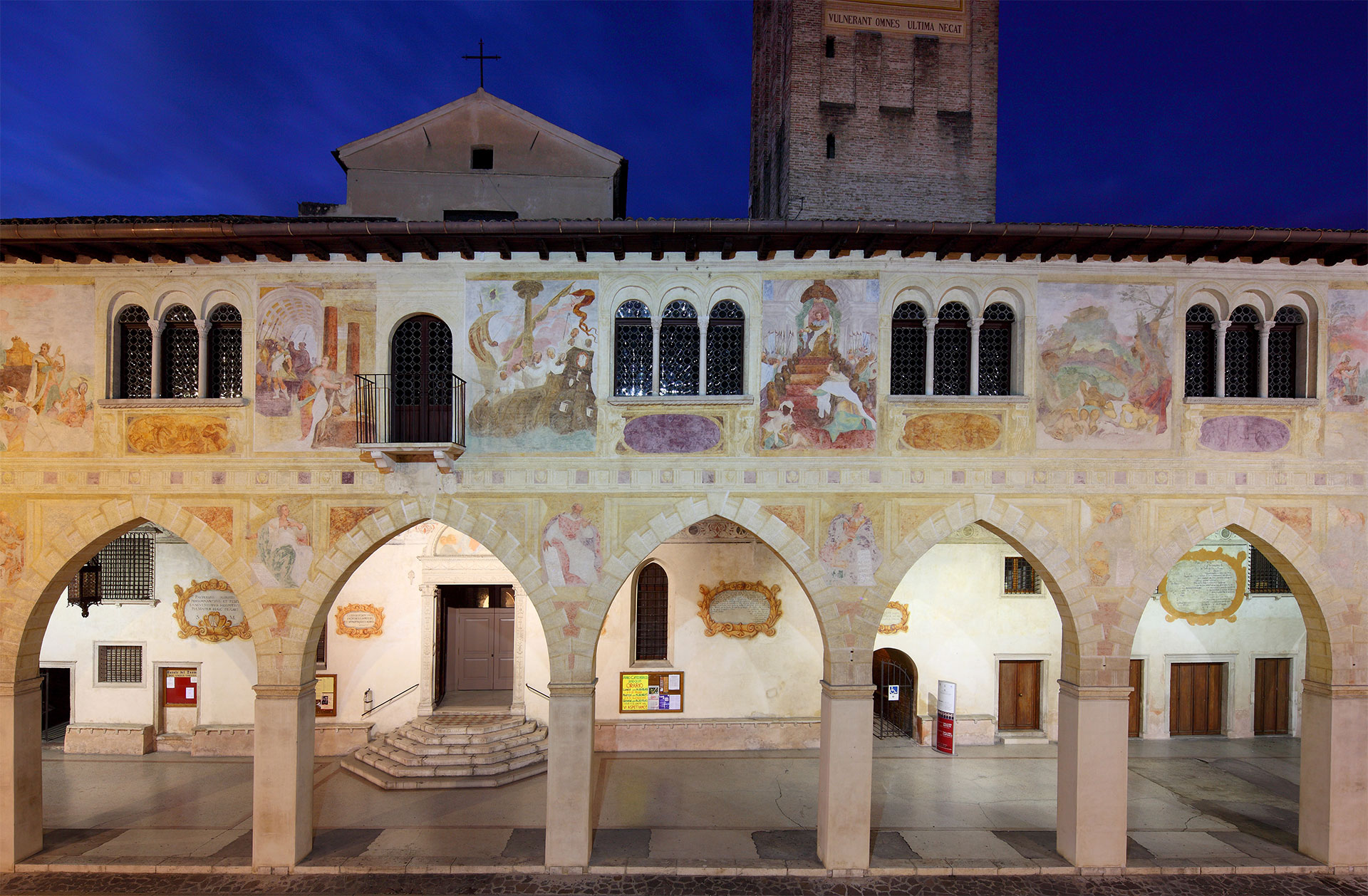 Valdobbiadene is an important town in the area, of ancient origins, full of interesting religious buildings as well as typical Venetian-style villas. 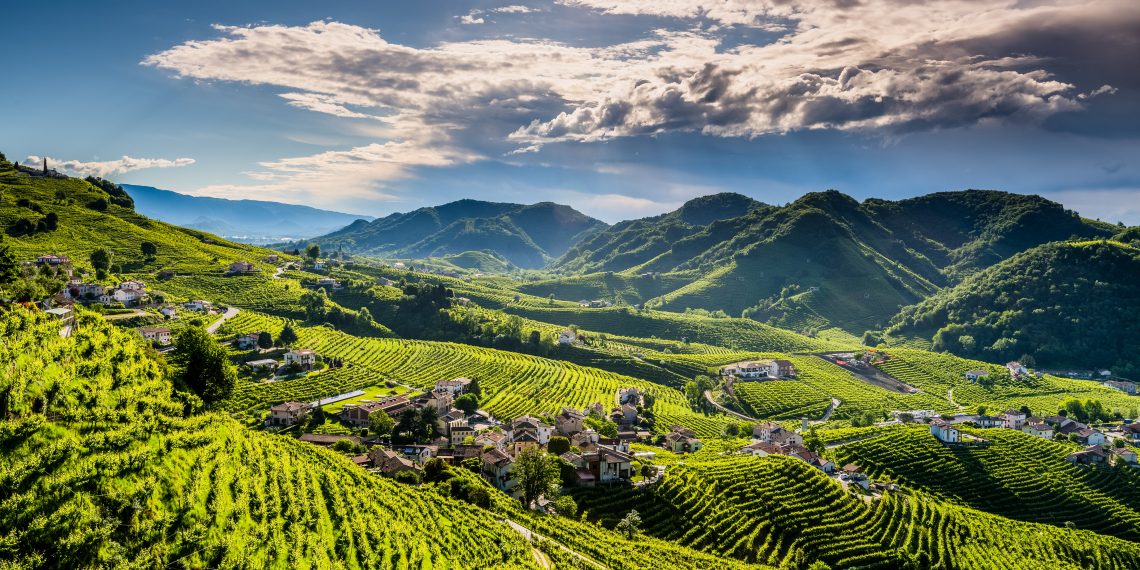 The spit roast is part and parcel of the gastronomic traditions of the area. Its true home is the commune of Pieve di Soligo, which organises a series of events in its honour every year. In 2010 it was recognized as a “Certified Traditional Product”. A typical snack in the zone is to enjoy a glass of Conegliano Valdobbiadene Prosecco Superiore with a plate of sliced cold cuts and white homemade bread. 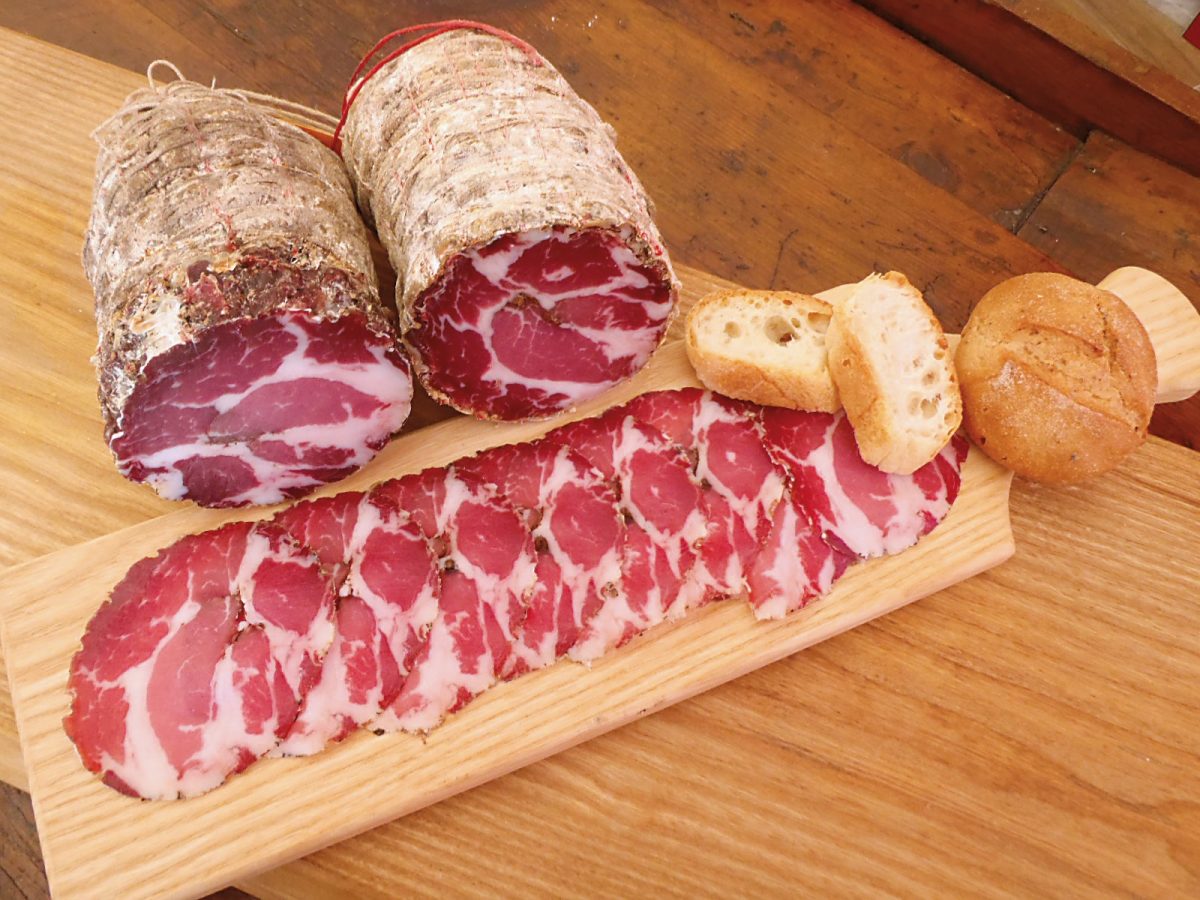 Cheeses, whether matured or young, have always played a part in the hospitality of the Treviso area, either served simply with bread or polenta or on a cheeseboard, accompanied by a glass of wine. The most distinctive types are Morlacco del Grappa, “Formajo Imbriago” a cheese that matures in the grape pomace and the Alpine cheeses in general, particularly those from Mount Cesen. Casatella Trevigiana D.O.P. 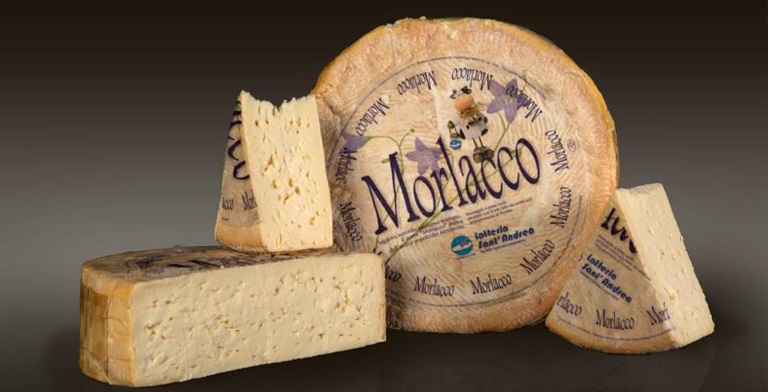 The story of Prosecco Superiore DOCG began in the hills of Conegliano Valdobbiadene: a small but high-quality area lying 50 kilometres north of Venice and 100 from the Dolomites.
Here wine production dates back to ancient times, and over the course of the centuries the continuous labour of man has modified the morphology of the countryside, creating unique scenery characterized by vineyards that literally create a patchwork on its hillsides.

The success story of Conegliano Valdobbiadene Prosecco began in 1876, the year that Italy’s First School of Winemaking was founded in Conegliano. This was followed in 1923 by the Institute for Viticultural Experimentation. Thanks to these centres for study and research, the vine-growers learnt to plant vineyards high up in the hills, in particular around Valdobbiadene, where cultivating vines is defined as “heroic”: here viticulture is exhausting and difficult because of the slopes, some of which have gradients of up to 70% and which force growers to carry out vineyard operations almost exclusively by hand. Indeed, to tend these vineyards up to 800 hours’ work is required each year, compared to 150 on the plain. 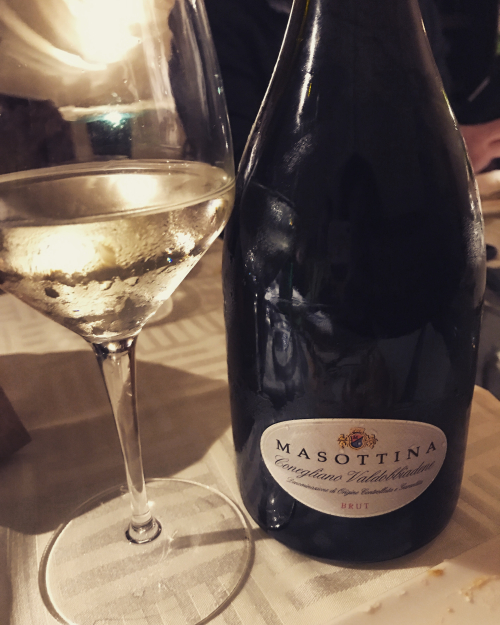 In the cellar, on the other hand, the so-called Italian Method for making sparkling wines was being perfected, which calls for refermentation in autoclaves (large pressurized tanks). Thanks to the research of the School of Winemaking, this Italian or Charmat Method was fine-tuned to such a degree as to be defined as a specific technique for producing Conegliano Valdobbiadene Prosecco Superiore.
The story of the Denomination continues to the present day, urged on by its success on both the national and international markets.