At 128 kilometres, the final stage of the Tour de France is the traditional parade race to the Champs-Élysées in Paris. The start is in Rambouillet, just like in 2012 when Mark Cavendish won his last sprint in the French capital. Champs-Élysées is French for Elysium, the final resting place of the souls of the heroic and the virtuous in Greek mythology. 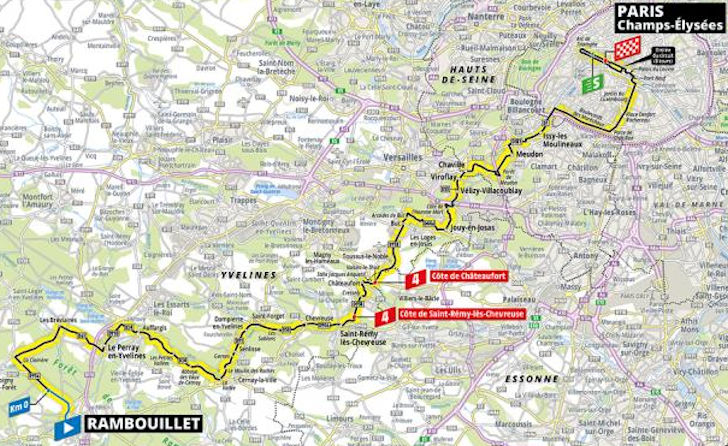 The ride from Rambouillet to Paris for stage 21 will be the usual photos and champagne before the sprint on the Champs-Élysées. For four consecutive years Mark Cavendish was the fastest sprinter in Paris, yet it’s been seven editions since his last win. In subsequent years Marcel Kittel (2013, 2014), André Greipel (2015, 2016), Dylan Groenewegen (2017) and Alexander Kristoff (2018) powered to victory.

Usually, the concluding race of the Tour de France starts at a slow pace, but once the riders hit the the cobbles in the centre of France the bunch accelerates. The stage ends with eight fast laps of almost 7 kilometres.

The outcome has been a bunch sprint for the past thirteen editions. We have to go back to 2005 for the last rider who managed to hold off a charging peloton on the Champs-Élysées. It was Astana boss Aleksandr Vinokourov, but since then the Tour de France boiled down to a thrilling criterium on the cobbles and an ensuing bunch sprint. Ewan has been the best sprinter on this Tour so far. He outgunned Dylan Groenewegen and Viviani two times, while the Dutchman and Italian both won one sprint. However, his sprinting style is not best suited to the cobbled finish. Therefore, while a sprint is almost a near certainty, the outcome is much harder to predict.

Population: 26,800
One year after Houilles, the Tour de France will be back in the Yvelines department, which has hosted the start of Paris-Nice since 2010. As for Rambouillet, it already welcomed the Tour in 1966 and 2012. In 1966, Lucien Aimar was given the go-ahead to lead the Tour after his team leader Jacques Anquetil had given up. AImar still needed to hold Raymond Poulidor and Jan Janssen at bay in the final time trail between Ramvbouillet and Paris. Eventually, Aimar retained a slim one-minute lead over Janssen. The time trial went to Rudi Altig while the morning bunch sprint was won by Belgium’s Ward Sels.

In 2012, Mark Cavendished had sealed the overall triumph of Team Sky by winning the Champs Elysees sprint while Bradely Wiggins was becoming the first Briton to win the Tour, one month before the London Olympics. Rambouillet is also the birthplace of Joel Gallopib, the father of Tony,n who took part in four Tours between 1978 and 1981.

The castle
At first a simple mansion, the 14th century castle, surrounded by flooded ditches, was gradually transformed into a sumptuous pleasure residence. Styles and periods follow one another during a visit from the marble room, built in 1556 under James I of Angennes, to the Council of Ministers room, the Napoleon bedroom or the boudoir of Marie-Antoinette and its rococo woodwork. The Gobelins or Aubusson tapestries and Sèvres biscuits stand alongside table sets manufactured by Christofle and Baccarat, all sealed with the blazon of the Republic. The castle is open to the public and managed by the National Monuments Center. Cernay-la-Ville
Cernay-la-Ville was the town in which Armand Blanchonnet, aka The Phenomenon, Olympic road champion at the Paris Olympics in 1924, spent his last years. In the 1924 time trial, held against headwind over 88 km, the 20-year-old Frenchman outclassed Belgian Henri Hoevenaers and his compatriot Rene Hamel. In this Olympic event, which also saw France take the team gold medal, the lowest ranked of the French was Andre Leducq, who finished only 9th. He went on to become one of the best riders of his time, winning the Tour de France in 1930 and 1932.

Chateaufort
At the crossroads of departmental roads 36 and 938, at the top of the Trinité coast, a bronze sculpture of Jacques Anquetil on his bike was erected in March 1989, after the death of the five-times winner of the Tour, in November 1987. This statue was stolen, probably to be sold at the price of bronze. It is now replaced by a stele bearing the commemorative plaque that was under the statue. The memorial was installed on the former Grand Prix des Nations course, which Jacques Anquetil won nine times.

Chaville
Chaville is known to cycling fans for having hosted for nine years, between 1979 and 1987, the classic Paris-Tours, first renamed Blois-Chaville, then Créteil-Chaville. Joop Zoetemelk, Sean Kelly and Phil Anderson were among the winners in Chaville.

45th arrival on the Champs-Élysées


1919, the Tour resurrects from the ashes of the War

1919 was of course the Tour of the first yellow jersey. But it was much more than that. The first Tour de France of the post-WWI period, it took place because Henri Desgrange wanted it to go ahead despite many obstacles: the roads were still scarred by the conflict, many riders were still incorporated in their regiment, the hotels were requisitioned and the bicycle makers, mobilised by the war effort, had not been able to prepare their best equipment for the race. Never mind. It finally was a loop from Paris to Paris symbolising the return of peace and going through Strasbourg to mark the return of the city into France. Sixty riders started from the Argenteuil bridge on June 29, 1919, the day after the signing of the Treaty of Versailles. They were only eleven to reach Paris on July 26 after countless withdrawals, including that of Philippe Thys of Belgium, double title holder in 1913 and 1914, who gave up on the first day of racing. Only ten riders were finally ranked as Frenchman Philippe Duboc was disqualified fifteen days after the finish for having received the assistance of a spectator.
The final winner at the Parc des Princes was Belgian Firmin Lambot, who in the words of the facetious Jean Alavoine, "picked up the dead" to win the GC. But for the Parisians, the real "star" of this 13th edition was s Eugene Christophe, the first holder of the yellow jersey, who finished 3rd despite his many setbacks throughout the event. The "old Gaul" will forever be the first holder of the yellow jersey but the garment, for its first appearance on the race, crossed the border to Belgium.
The last stage in Paris was won by Jean Alavoine, his fifth stage victory in the edition which he finished in second place. The Parisian, who died in Argenteuil during the next war in 1943, won a few months later the Armistice Grand Prix, held over 520 km between Strasbourg and Paris, via Metz. 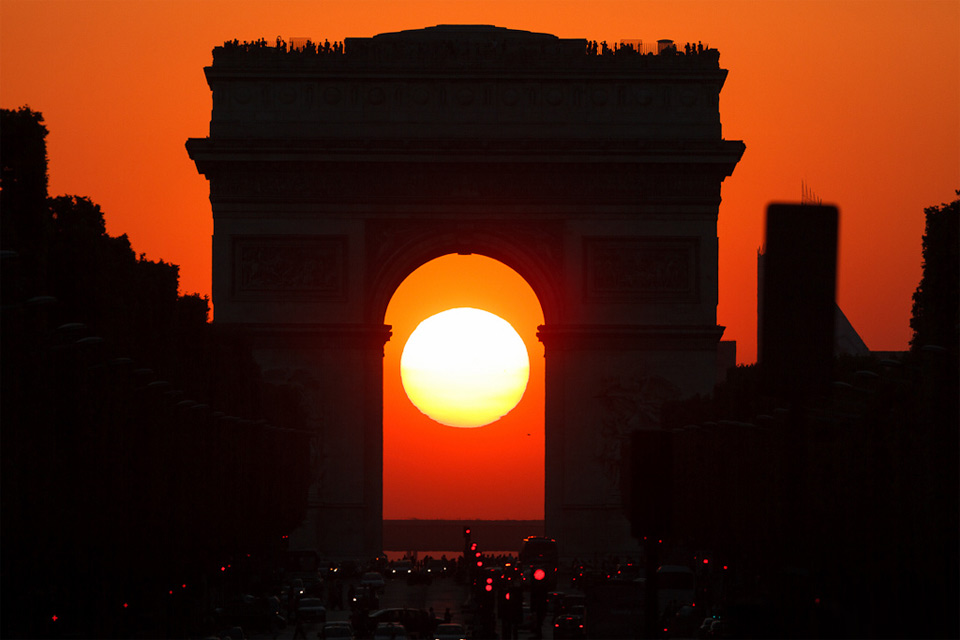