Stage 16 of La Vuelta offers the second individual time trial of this year's edition. Amounting to 32 kilometres, the race is being played out in Cantabria and the trying route runs from Santillana del Mar to Torrelavega.

The route will be perfect for the time trial specialists who have come through the Asturias-Leon triptych, without having to go too deep or work too hard for their team's GC candidate.
Also, the better time trialists among the remaining GC contenders will be looking to take time from the mountain goats, prior to the final mountain stages.
Departure place Santillana del Mar is famous for its three lies. The town is neither holy (Santa), not flat (llana) and its not located on the sea (mar) either.

The fact that it is not holy and not on the sea either will not bother most riders, yet the fact that the route is rolling and not flat at all will be a disappointment to most of them. The route is rather demanding – we are in Spain, who would expect otherwise?

Again, the race profile is somewhat misleading. With With 490m of altitude differences, the numbers are comparable for example with the one in this year's Tour or the first one from the 2017 Giro.
The first kilometre sets the tone with its 5% slope and following the descent the route continues on rolling roads to the next uphill section. At kilometre 9.4 the riders climb for 1 kilometre at 4% before the longest climb of the day appears almost 3 kilometres later. The 3 kilometres long sector slopes at an average of over 4%. 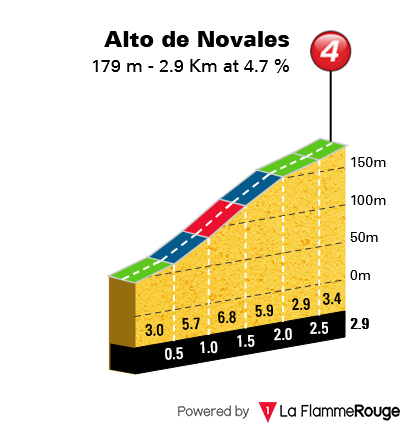 Following a 3 kilometres drop the last uphill sector climbs for 2 kilometres at 3.5% before the last 10 kilometres to the line in Torrelavega are either flat or downhill.

The profile of the route reminds of the individual time trial in last year’s Vuelta, although that route was 8 kilometres longer. Chris Froome took the stage win, 29 seconds ahead of Wilco Kelderman with Vincenzo Nibali almost 1 minute back.
Former World Champion Oscar Freire and Juan José Cobo were born in arrival place Torrelavega. The time trial finishes at the Complejo Deportivo Oscar Freire – or, the Oscar Freire Sports Centre.

Video of the last 5kms.
https://youtu.be/NiI2KG3Ni_A

Details of the final kms. 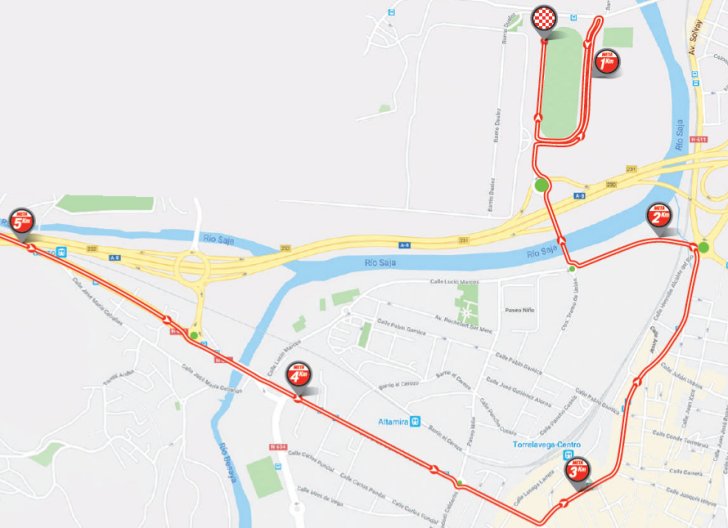 Team hotels for the end of stage. 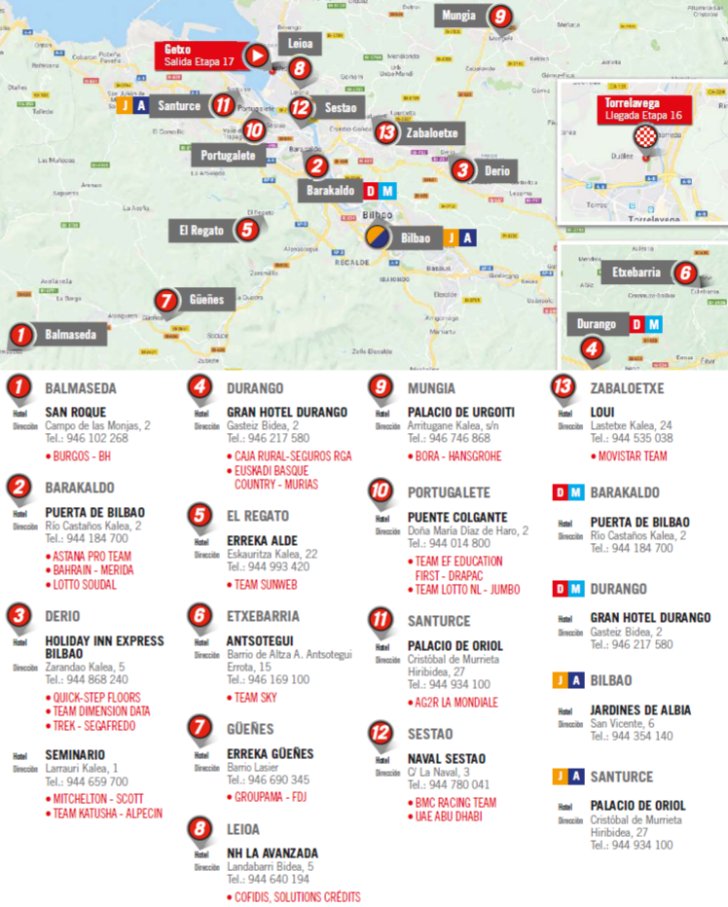 It has been 10 years since the last time La Vuelta rode through the cobblestone streets of Santillana del Mar. The Cantabrian locality hosted the 10th stage finish-line of La Vuelta 2006 but this will be its first time hosting a departure. Idyllic natural surroundings, impressive cliffs overlooking the sea and unique architecture have made this municipality a Historical-Artistic complex, an outstanding representative of Romanesque and Renaissance buildings. 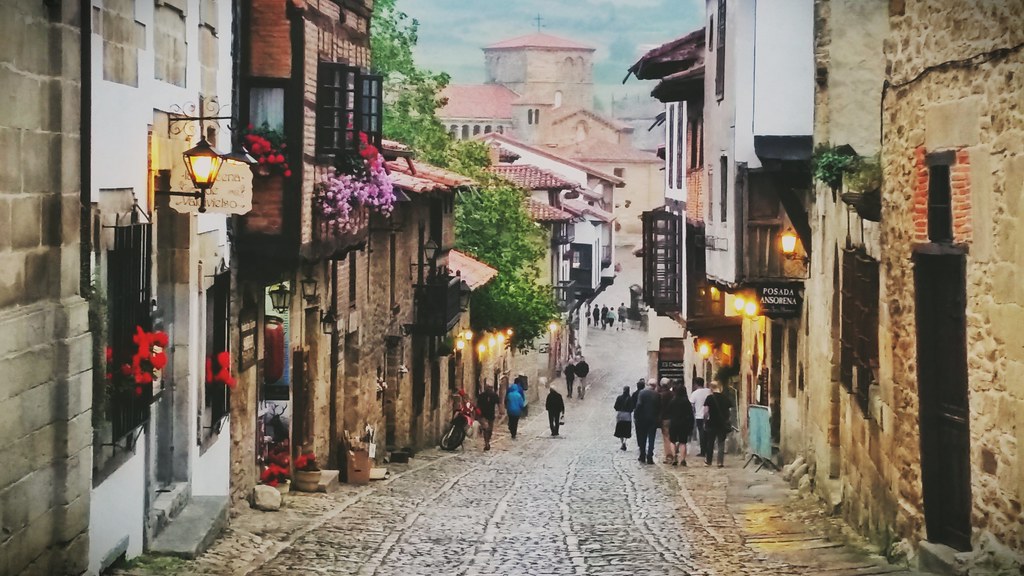 In “Nausea”, one of his greatest masterpieces, French philosopher Jean Paul Sartre, classified Santillana del Mar as “the most beautiful town in Spain”. A few years later, the emblematic Cantabrian town entered the elite club of the country’s most beautiful towns.

Santillana del Mar really has every reason to enamour its visitors. The town was declared a Historical Artistic Complex in 1943, thanks to its monumental historical centre, presided over by the Collegiate Church of Santa Juliana, built between the 11th and 13th centuries and to a multitude of palaces, emblazoned manors and magnificent towers such as the one of Don Borja or El Merino.

As if that wasn’t enough, Santillana also has the Sistine Chapel of Quaternary Art, the Caves of Altamira, a World Heritage Site since 1985, and now the Altamira Museum, one of the country’s most visited museums.

But, besides its monuments, Santillana stands out for its museums, its exhibits, its archaeological sites, its Three Kings’ Parade (a festivity of National Touristic Interest), and its acclaimed International Puppet Festival (BISONTERE).

The town has marvellous tourist infrastructures and an enviable gastronomy, as well as the Santillana Sea, with the peculiar Santa Justa Beach and the rough Ubiarco coast. It is a place in which to get lost and dream.

As a result of its condition as a habitual transit area for travellers, Torrelavega knows how to be a good host. The Cantabrian locality will welcome the riders who will arrive, one by one, during the second time-trial with open arms. This will be its third time hosting an individual time-trial following its experience in 1973, won by Eddy Merckx, and in 2001, won by Columbian rider Santiago Botero.
Torrelavega is the heart of Cantabria, a crossroads located a few minutes from beaches and from other unique enclaves (Suances, Comillas, San Vicente de la Barquera, Santillana del Mar...). It is an important industrial, commercial and service centre. Highlights among its heritage include the Neo-Gothic Church of the Assumption and of the Virgen Grande (Modernist), the monumental complex of Viérnoles and the Demetrio Herrero Palace, today the Town Hall. The patron saint festivities, celebrated around the 15th of August, culminate with the Floral Gala, a festivity of Touristic Interest.

The impressive National Livestock Market hosts the livestock fair every Wednesday, as well as numerous other events throughout the year. The cultural offer presents such installations as the National Photography Centre and the Concha Espina Municipal Theatre. The city’s commerce and hotel industry are both big tourist attractions, with excellent establishments, bars and great restaurants that feature such creations as the Torrelavega pastry, known all over Spain for its quality and flavour. 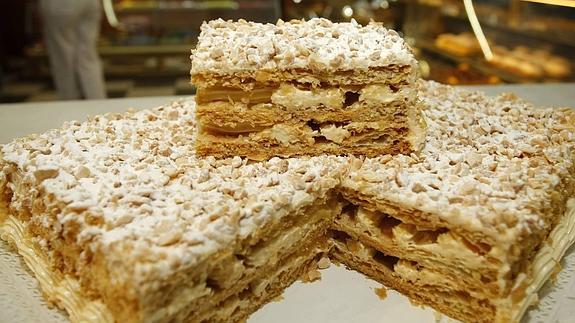 Highlights among its natural spaces include Viesca Park, near the Besaya River, of Manuel Barquín Park, in the city centre. There is also Ronda Boulevard, designed in order to discover the city on foot, and Mount Dobra, a privileged natural area that houses ancient settlements and archaeological sites.
"Science is a tool for cheaters". An anonymous French PE teacher.
0
«123»