Zone 7: the road to Winnats

ugo.santalucia Posts: 27,219
June 2021 edited June 2021 in Training, fitness and health
Did Hardriders yesterday, organised by Banbury Star CC. Really a great time trial course, that in 23 miles packs in a pseudo 25 and a proper hill climb. The hill in question is Sunrising, 93 vertical mt of ascent up the less popular side of Edge hill in Warwickshire. The rest of the course is up and down the rolling A422, which is a very quiet road on a Sunday morning.
I did ride within my means, found it quite easy to keep a lid on the power, averaging 225-230 Watt up to the hill, where I went full gas (3:27 at 365Watt). Strava says I was 3rd quickest on that segment on the day... BUT it's still a course that rewards the testers and the disc wheels, so overall I was only 31st. Given the nature of the course, I am quite happy with 1:04.46, it's basically a 23 miler that yields the same times as a flat 25, looking at the top of the standings and 1:05 is more or less where I am at over that distance. Some might notice a new top.
A proper HC Open race in 9 days, just outside Sheffield... first qualifier for Winnats 21. 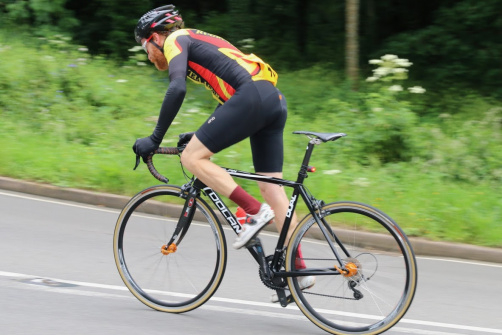