scaramanga07 Posts: 10
January 2021 in Workshop
So, back in late Sept i was involved in a collision with a car (their fault). Luckily, both i and the bike managed to come out of it reletively unharmed. Although, upon further inspection, i started to notice the bike had sustained quite a lot of frame alignment issues.

I first noticed my crank ring was rubbing on the chainstay, then after altering that i noticed the crank arm was clipping the chain at its high point. So, the rear triangle was cold set back by about 10mm+ Once i found that just shear brute force was needed, i found it quite doable to return the bikes rear to the correct postion. And i know with Titanium it generally advised not to cold set the frame but it seems to have worked just fine.

I was quite pleased an mounted the bike on to the turbo to give it a run but soon found the handlebars felt uncomfortable and the wheel seemed to be tilted to one side. I have a look and the headtube is almost definitely twisted.

I've tried various methods but with the Headtube, top and down tube all being large, the area is very stiff and hard to budge. I know there is a risk of cracking Titanium but as it is, it seems a shame to class it as a write off.

I have tried the following :- I have now looked into stripping the frame down and building an alignment table (Granite based and a large aluminium bottom bracket clamp + various other clamps and addtions to keep the frame in place (like this)


Can any one suggest an easier way i can try cold setting the headtube? 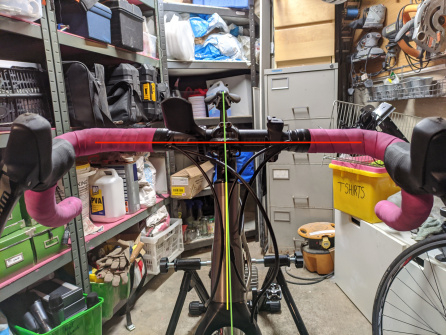 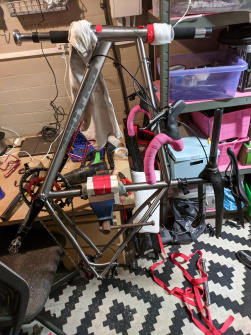 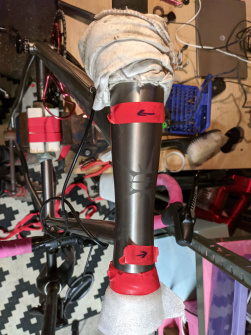