The 17th stage on the Giro leads from Bassano del Grappa to a summit finish in Madonna di Campiglio. It is the first of three - 5 star stages, rated by the organisers.
The first half of it is extremely hard, while the second is much easier although the total altitude gain is still impressive. Bassano del Grappa hosted the start of a mountain time trial to Cima Grappa back in 2014. Nairo Quintana took the spoils ahead of Fabio Aru with Rigoberto Uran more than 1 minute in arrears. 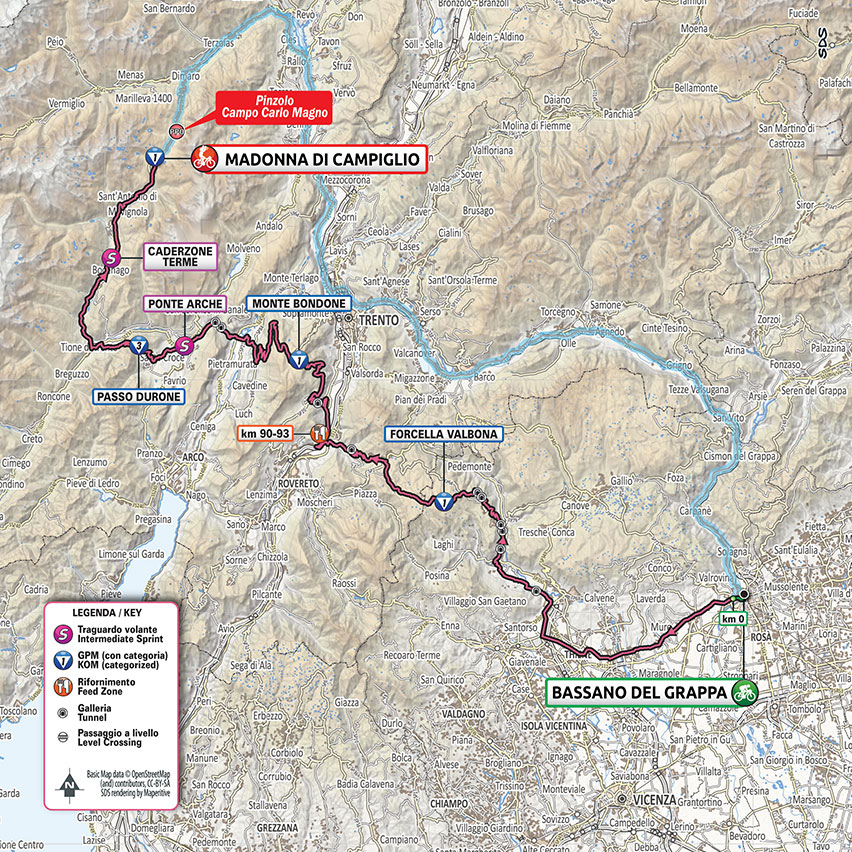 The 17th stage at the Giro is dominated by three huge ascents and a shorter one. The shortest is more than 10 kilometres, which goes to show that we have reached the point in the race where there are no more second chances for GC hopefuls.. 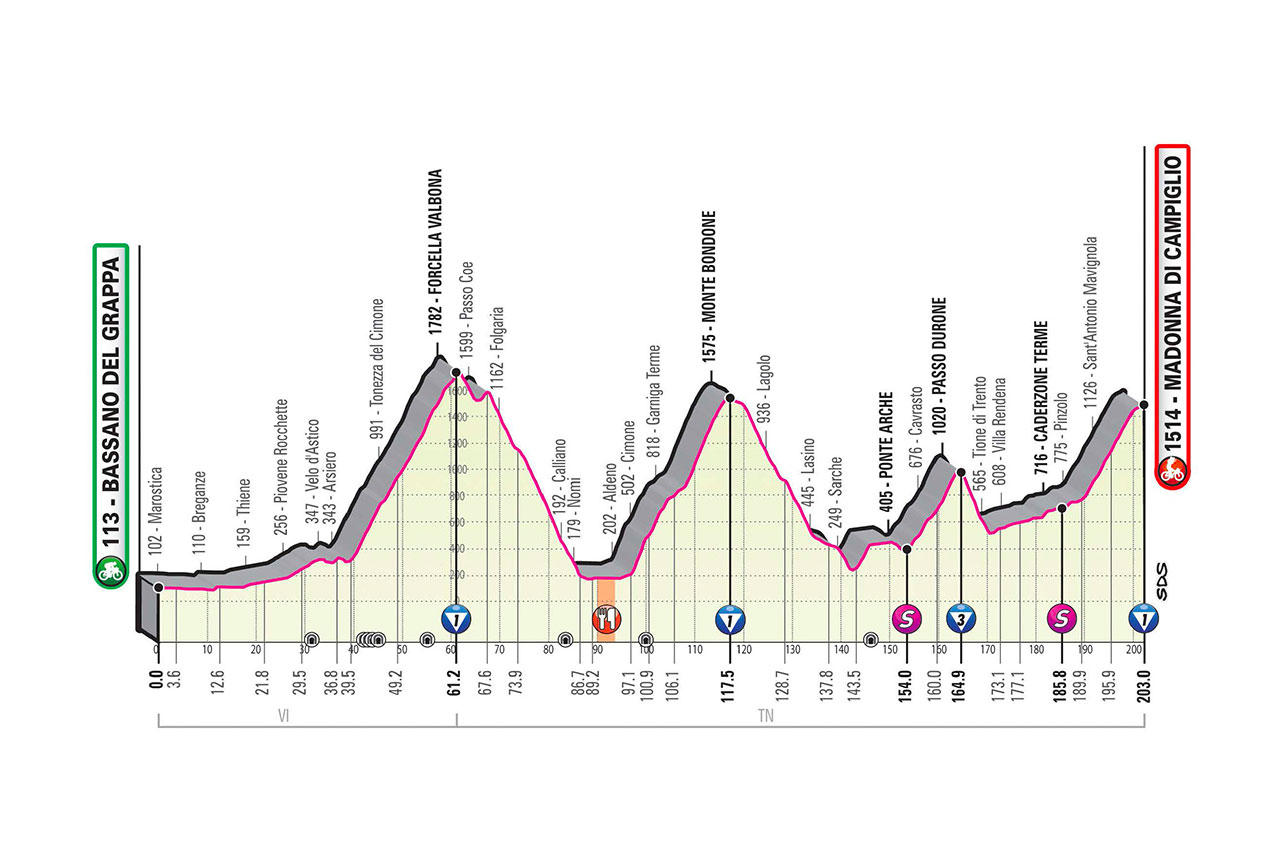 Starting from Bassano the peloton will head into the mountains fairly quickly, as the first categorized climb starts after 40 km of relatively flat roads. The battle to get into the break will have been ferocious to this point, but perhaps yet to be settled.
The first obstacle is the massive Forcella Valbona (GPM1, 21.9 km at 6.6%) which has never been climbed in the Giro from this side. It is a very long and steady climb. 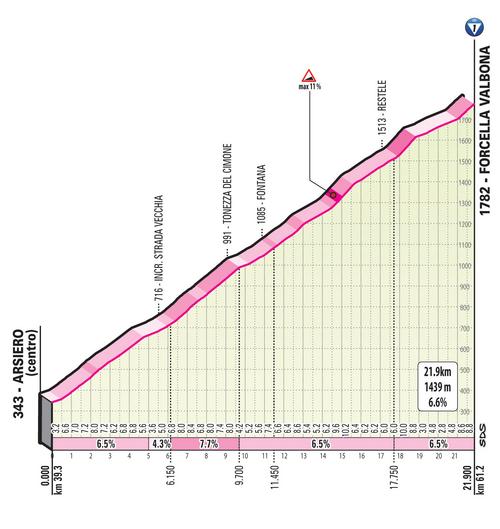 At the bottom of the descent there are only 10 km of flat before reaching the town of Aldeno and starting to climb again. This time is the mythical Monte Bondone (GPM1, 20.2 km at 6.8%), a classic Giro climb, but not seen in the event since 2006. This side is different than the usual one, too and is more irregular in nature. It was used in the stage to Andalo 1973, when Merckx won. 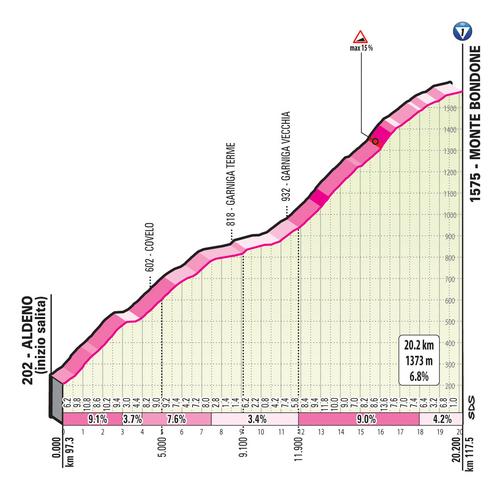 When the riders come down from the Bondone there are still 60 kilometres to go. The breakaway’s lead will be solid indicator of their chances to survive all they way to the line. The last part of the race is less hard. The Passo Durone is a 10.4 kilometres climb at 6% and this being the Giro, only merits a third category. 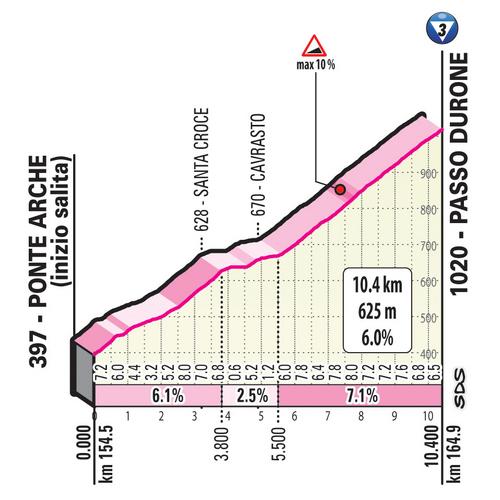 The descent leads onto a 20 kilometres long false flat before the final haul up to Madonna di Campiglio kicks in. The ski resort lies at the end of a 15.5 kilometres climb with an average gradient of 5.9%. 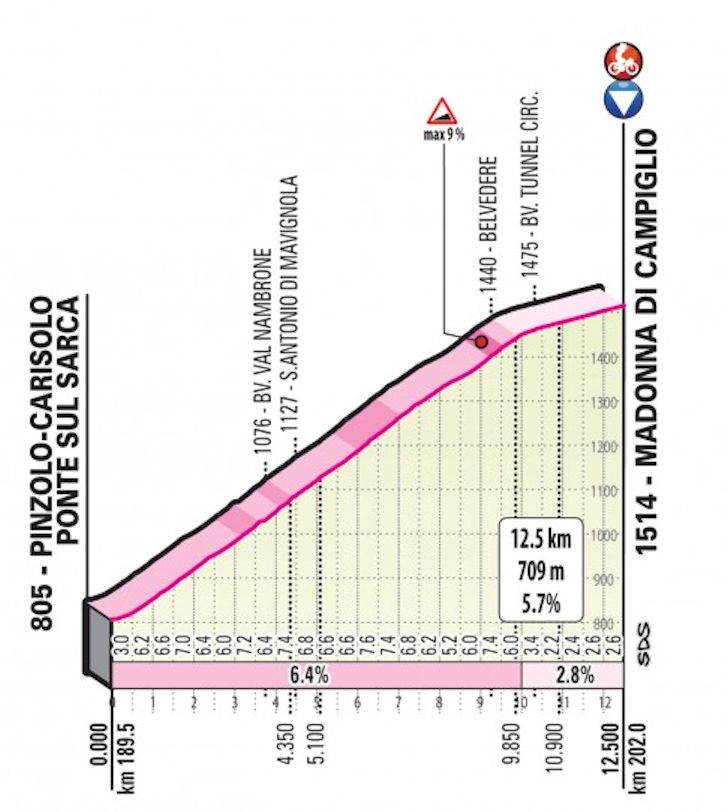 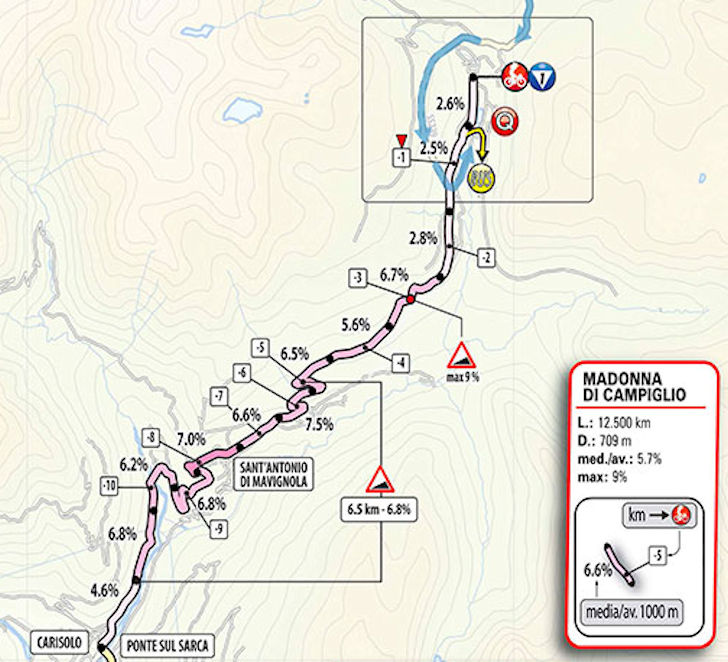 The 2015 Giro moved through Madonna di Campiglio to finish 3 kilometres higher up the mountain near Rifugio Patascoss. Mikel Landa soloed to victory after forcing a gap in the last part of the ascent. 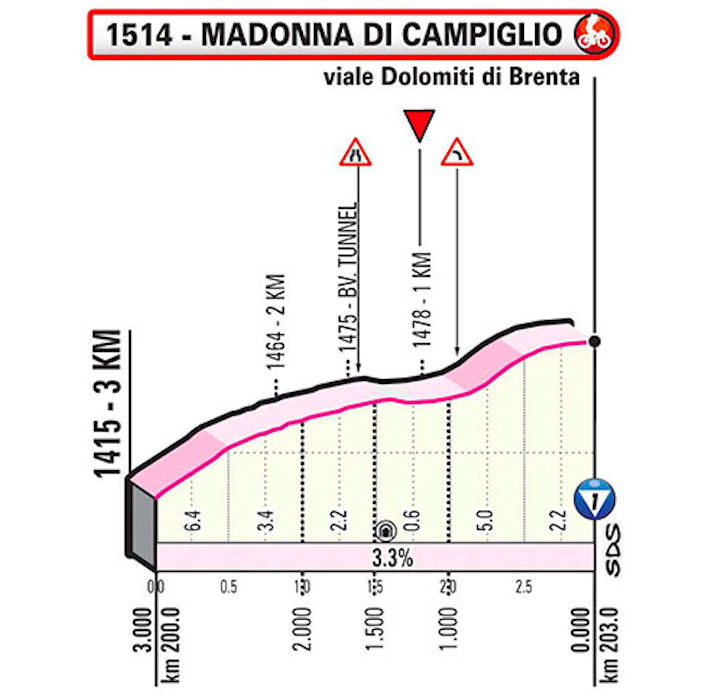 In the heart of Veneto, crossed by the river Brenta, the town of Bassano del Grappa is at the foot of the Monte Grappa of the same name, the scene of the bloody battles of the First World War.
It is home for 70,000 people.

Among the food and wine specialties of Bassano and its vast area we find dishes of all kinds.
The Bigoli di Bassano, a typical and tasty first course, the Bassano asparagus washed down with Pove del Grappa Olive Oil, and the Polenta and Asiago, to be enjoyed in the coldest months of the year.

The vineyards of the area produce wines, both red and white, from breganze, to the Montello and Colli Asolani wines to get to the real Grappa di Bassano. 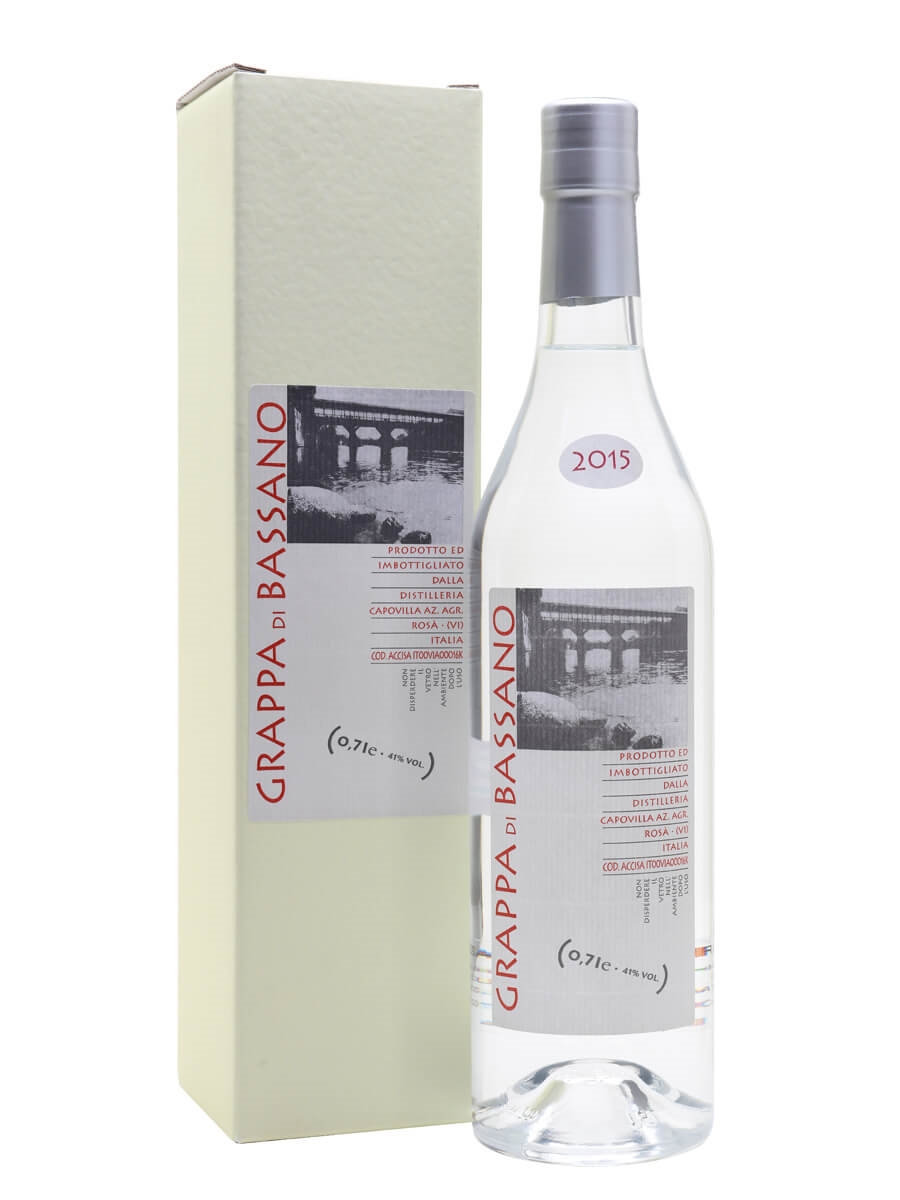 Madonna di Campiglio, Pinzolo and Val Rendena (western Trentino) are a mosaic of natural beauties. In these places, the alpine setting shows its best: on the east side there are the Brenta Dolomites-UNESCO World Heritage, on the west side you can admire the shiny glaciers of the Adamello and Presanella. 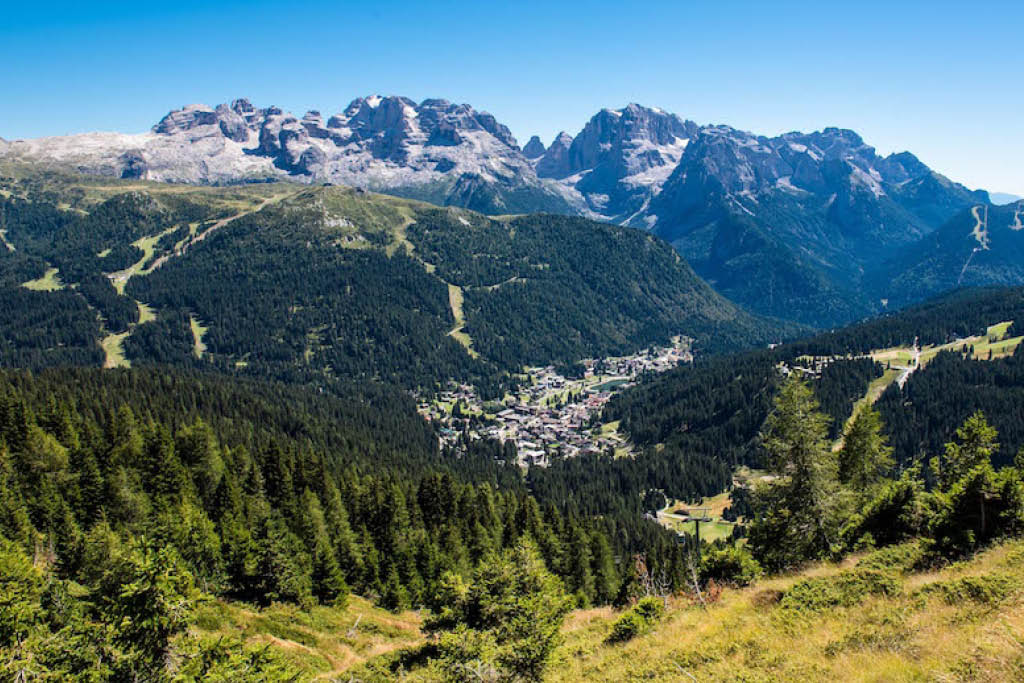 The traditional food of Val Rendena sinks its roots into a poor past and features wholesome ingredients and exquisitely authentic flavors like the cornflour for polenta, garden produce, herbs and other aromas. Sausages and cheeses, polenta, mushrooms and wild game are typical Val Rendena delicacies.