The second Sunday of the race offers an interesting medium mountain stage with uphill finish in Roccaraso. The altitude gain adds up to more than 4,000 metres. It's actually a bonus mountain stage as it was added when the route had to be rearranged.
From the town of San Salvo, on the Adriatic coast, the peloton will head inland towards the Appennines. 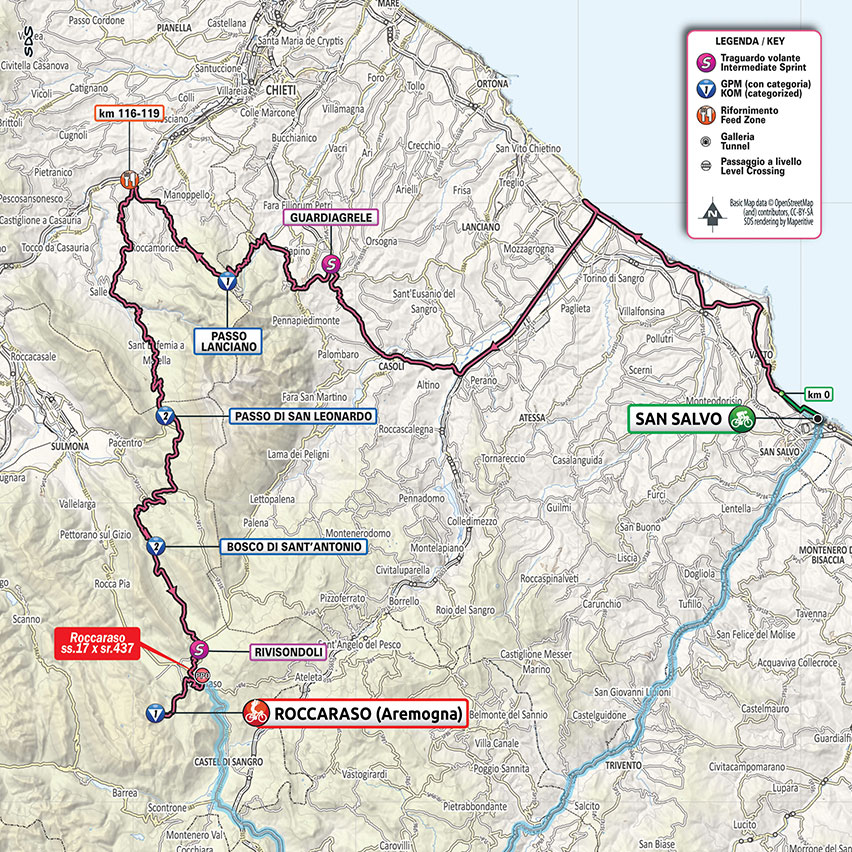 After about 40 kilometres the pink caravan heads inland. Following a warm-up climb to Guardiagrele the riders face a string of huge mountains: Passo Lanciano, Passo San Leonardo and Bosco di Sant’Antonio. After this brutal trio there are 27 kilometres left to race. The first part travels on an undulating plateau before that road starts to go up again. 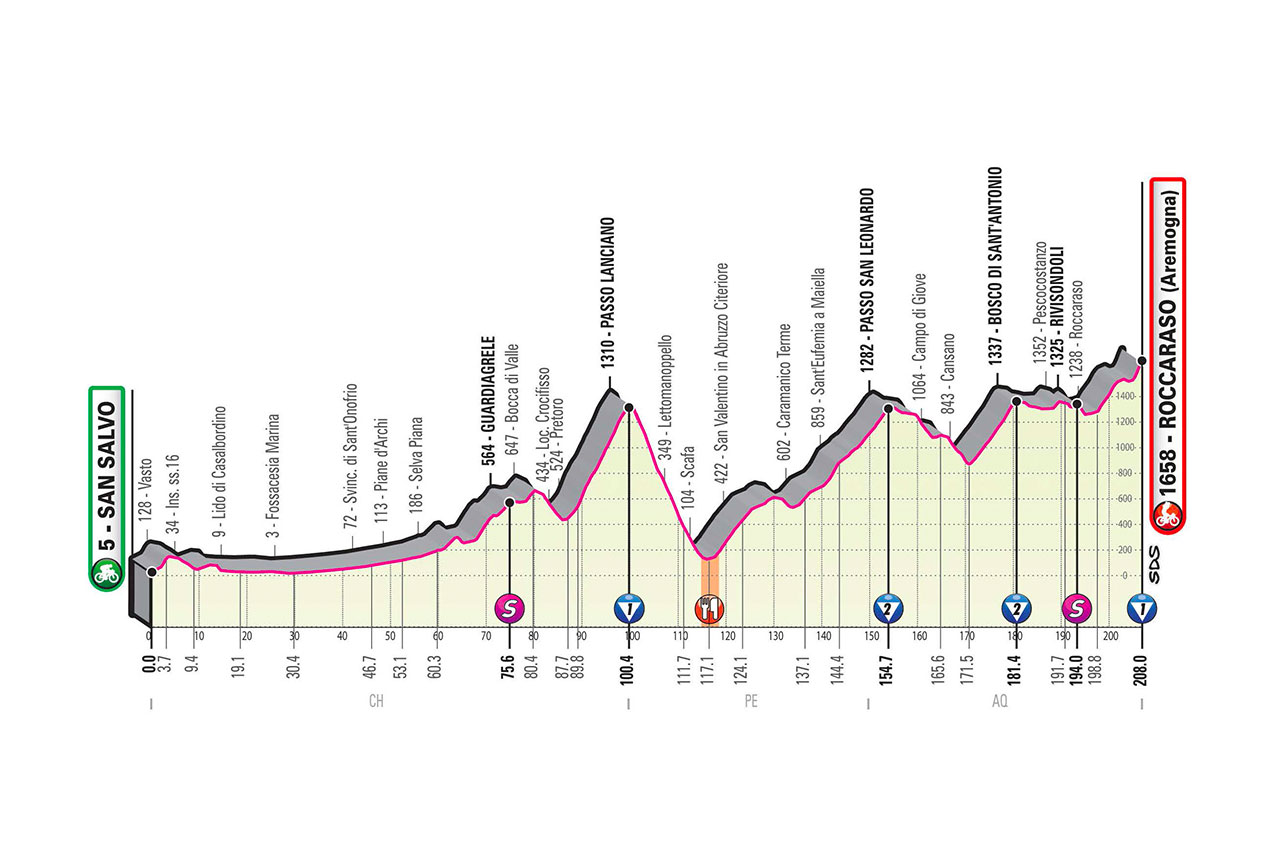 The first notable point of the race is the intermediate sprint in Guardiagrele which is on top of a small climb of around 7 km at 4-5%. After it the riders will move along the side of the Maiella massif, and then climb the first GPM of the day, Passo Lanciano (GPM1, 12.7 km at 6.9%). This is possibly its easiest side, but even so it’s a pretty hard climb. For reference, Passo Lanciano is also called Blockhaus. 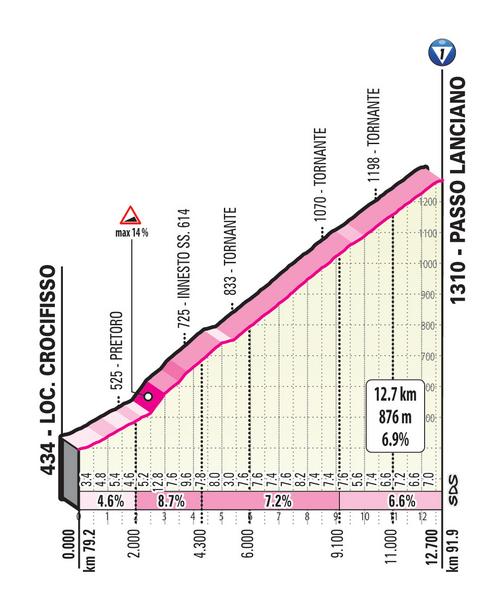 Once the peloton reaches the bottom, they will start climbing immediately once again, all the way up to the Passo San Leonardo (GPM2, 13.8 km 4.5%) 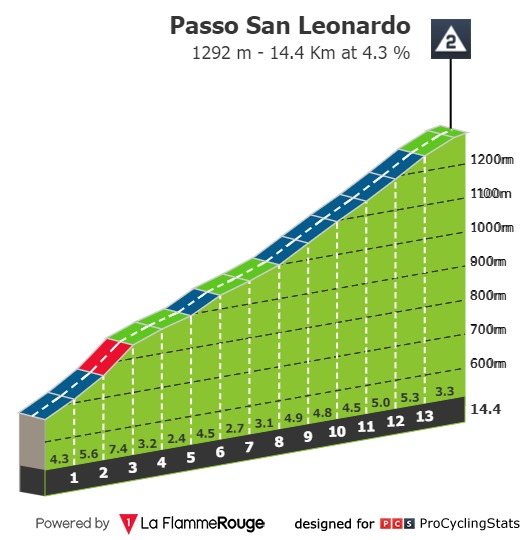 Another descent (very easy) will bring everyone to the following climb, Bosco di S.Antonio (GPM2, 9.9 km at 5%), a very regular climb that tops at 27 km to go. 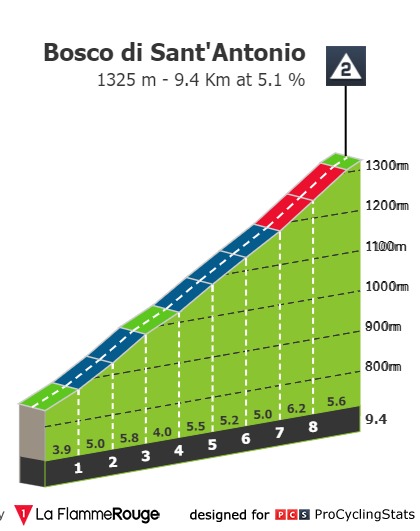 The finish climb is almost 10 kilometres long and the average gradient sits at 5.7%. That statistic is biased though, as the ascent evens out a couple of times. 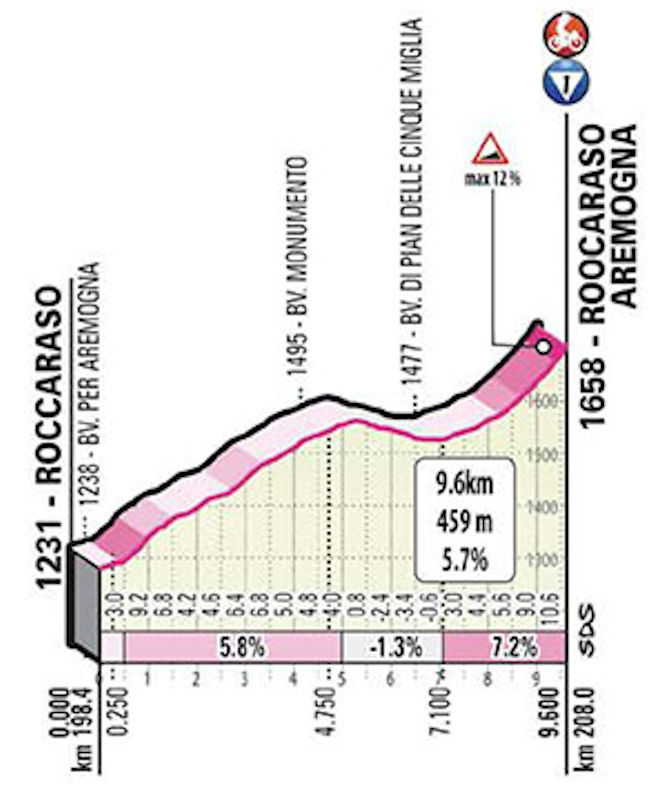 The last 2 kilometres to the line slope at 7%, while the last kilometre serves a number of double digit ramps. 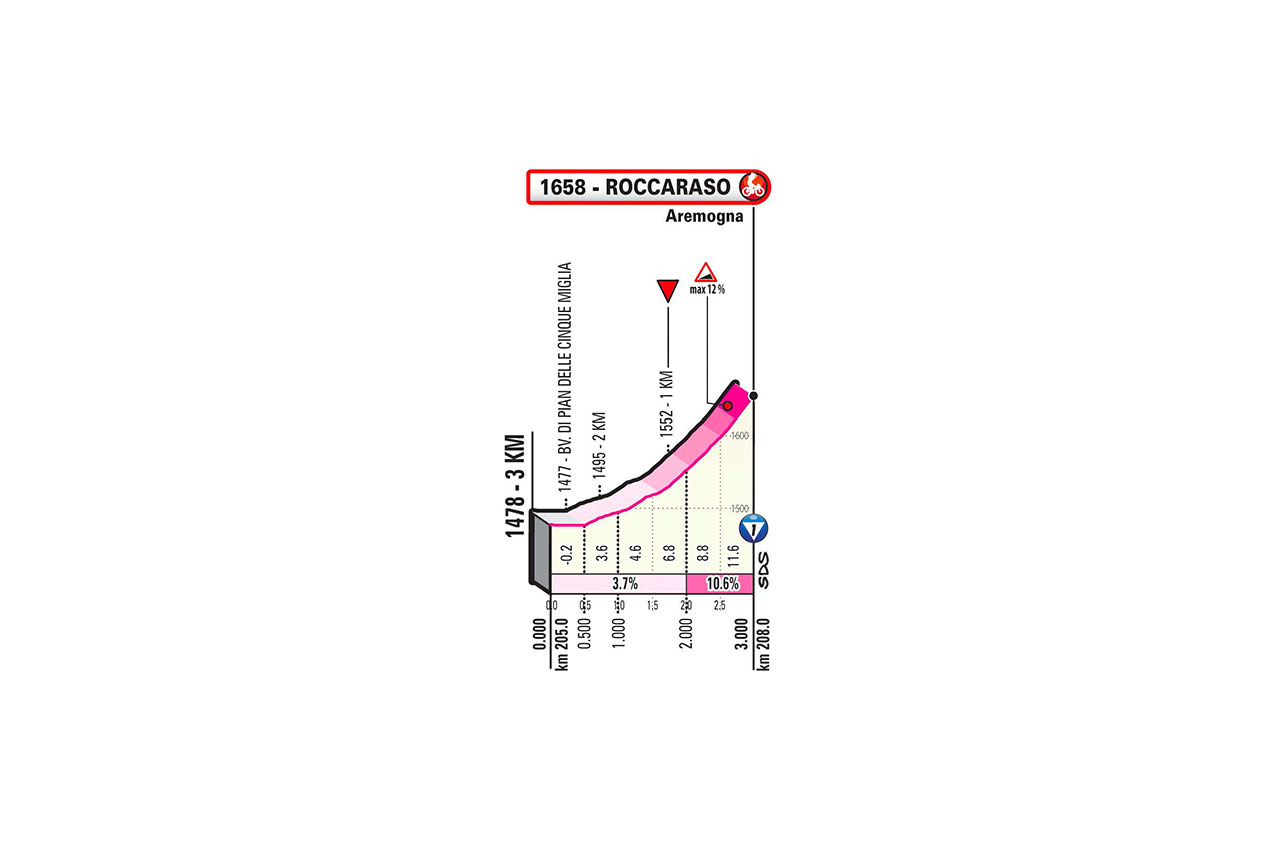 The finish lies at an elevation of 1,658 metres, which is almost 100 metres higher than the 2016 finish. Back then, Tim Wellens soloed to victory near the Roccaraso refugio.
Two intermediate sprints – at kilometre 75.6 and kilometre 194.0

San Salvo is washed by the Adriatic Sea and is the southern gateway to Abruzzo. An important production and commercial center already in Roman times. As a small rural town during the eighteenth and nineteenth centuries, following the discovery of methane deposits, it began an industrialization process with the settlements of the Italian glass company (later Pilkington and now NSG)
Blue Flag status for 22 years, it's a tourist destination both for the sea and for the historical heritage. It is “one of the 100 municipalities of small great Italy”. 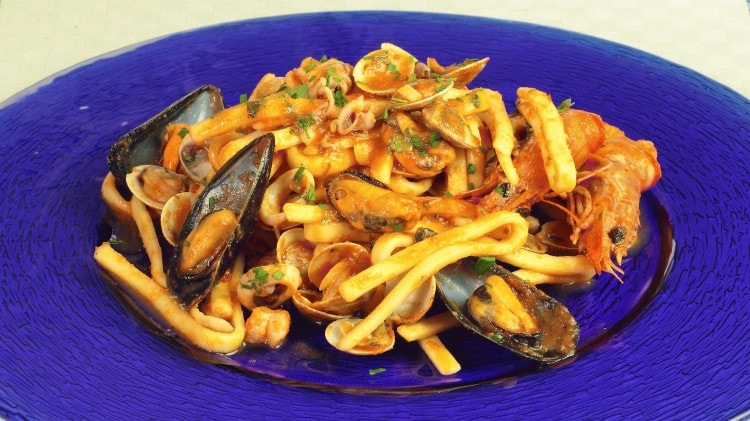 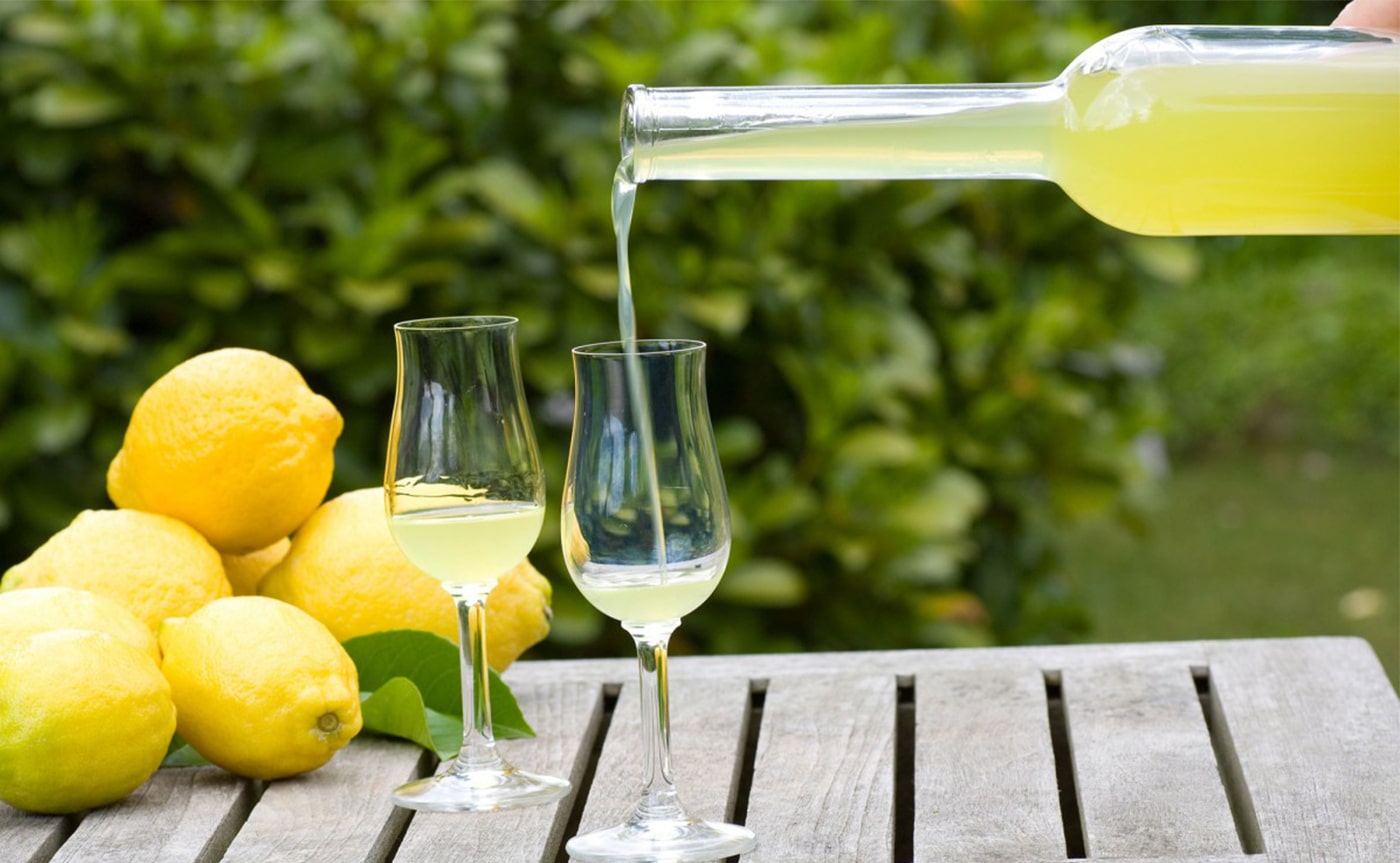 Roccaraso is the best known and best equipped ski resort in the Apennines. It is located a short distance from Rome and Naples, on the High Plateaus, between the two large protected areas of the National Parks: the historical one of Abruzzo, Lazio and Molise and that of Majella.

A long success story: for over half a century it has in fact been one of the most popular and popular tourist destinations in Italy in every season.
Roccaraso is a real paradise for snow lovers. With its new fast, modern and barrier-free lifts, it presents itself as a single large ski area that offers slopes of all kinds within an area of about 110 kilometers. 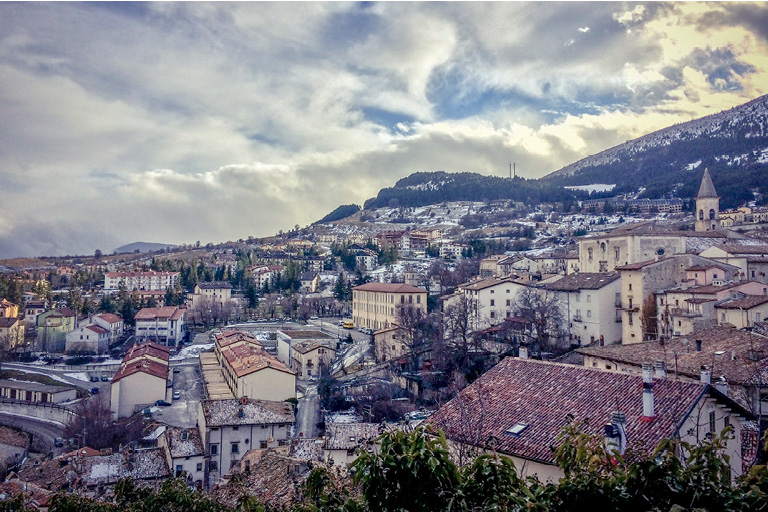 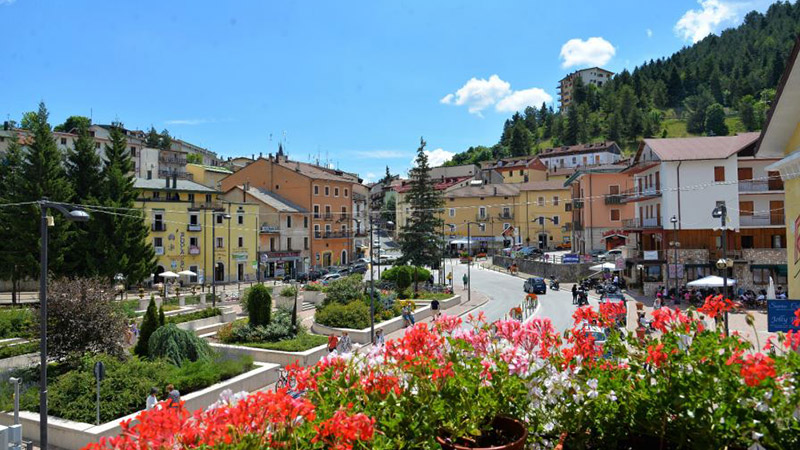