Here we go, yet again, with another stage that looks pretty much like most of the rest, in this first week.
At 239 km, the longest Giro stage is divided into two distinct parts: it begins flat for 140 km, following the Adriatic coast, before taking in a succession of undulations and punchy climbs for the next 100 km, as far as the finish. The route takes in a dozen ascents, including 3 categorised climbs. After crossing the Monte San Bartolo, the final descent ends 3 km from the finish. 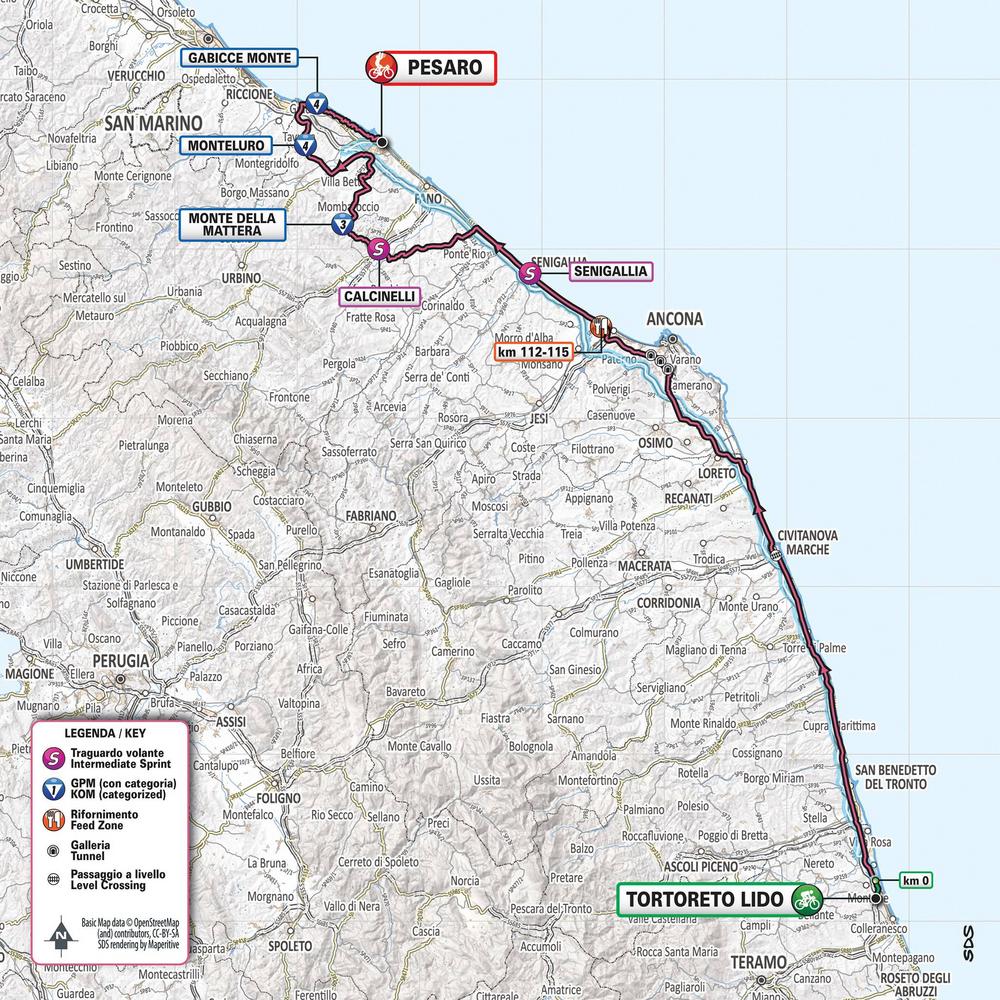 Tortoreto Lido was included in the 2011 Giro. The race set off to a punchy arrival in Castelfidardo, where John Gadret outgunned Joaquim Rodríguez and Alberto Contador.

The Monte della Mattera is crested at kilometre 168.5 after a 10 kilometres climb with an average gradient of almost 4%.

Following the Mattera climb the route is hardly ever flat. The last 35 kilometres in particular are demanding with roads going either up or down. The Monteluro climb and the Gabicce Monte stand out, respectively crested at kilometre 203.7 and at kilometre 214.9.

On undulating roads the route continues to a technical descent of approximately 7 kilometres to Pesaro. The riders reach the seaside town inside the last 3 kilometres before a final run-in on the flat. The home straight is 250 m long, on 7m wide asphalt road.

Tortoreto is a lovely and attractive seaside town on the coast of the Adriatic Sea in the province of Teramo in the Abruzzo region. Its population is 11 783. Tortoreto is divided into three parts: the medieval town in the hills, the seafront resort, usually referred to as Tortoreto Lido and three hamlets (Salino, Cavatassi, Terrabianca). Its origins are very old: in its territory there is also a Roman “Villa” that dates back to the 2nd century B.C.
In the 1900s Tortoreto became a touristic town for very relaxing summer holidays thanks to the wonderful sea, the long beaches, and the amazing promenade called Lungomare Sirena. Tortoreto Lido also has a magnificent bicycle path immersed in the green and surrounded by beautiful hotels, confortable boarding houses and astonishing beach resorts ready to welcome thousands of tourists every year.

The touristic soul of the town is confirmed by the recognition that Tortoreto gets every year: the Blue Flag Beach obtained twenty-two times; the Green Flag that is given to the best beaches for children; the Yellow Flag for the municipality that has a bike path(FIAB); the Green Spike for sustainable rural development.
Tortoreto ia also famous for its well-cultivated hills where excellent wine and oil are produced. These products, together with clams that are collected by the fishrmen from Tortoreto, represent the typical products of this territory.

The city was founded as Pisaurum by the Romans in 184 BC as a colony in the territory of the Picentes, the people who lived on the northeast coast during the Iron Age. Pesaro, lies a long the the Adriatic Sea, with its culture and accessibility, has chosen hospitality as a way of life. There are seven kilometres of beaches, equipped and free, surrounded by a unique environment such as San Bartolo Park. During the summer the holiday is very lively with a calendar full of events including la Mostra internazionale del Cinema and il Rossini Opera Festival. In 2017 il received the recognition of European sports City. With more than 180 sport facilities every year hosts hundreds of national and international sporting events, there are 10 world champions and an increasing number of athletes. Since 2017, it has also been designated as a Unesco creative city. As a homage to Rossini, the composer and musician from Pesaro, in 2016 the Rossinian celebrations were launched, as part of the 150 ° anniversary of his death.

The city offers all the opportunities of a historic center of ancient origin still alive today. Many artisan workshops are discovered in the alleys, laboratories and shops that present the productions of the famous and secular tradition of “Ceramica Pesarese”, antiquarians, bookstores, specialized shops. The shopping centre hundreds of shops, many of which are of the highest quality. A pleasant surprise is represented by the numerous parks and gardens: These are ample and well-kept green oasis that mark the city both inside and just outside the perimeter of the old town.

The gastronomic culture of Pesaro has an affinity with Romagna pesaro is on the coast and the fish is privileged ingredient that you can taste in most restaurants. Among the proposed recipes, roasted and brodetto.
Rossini was a chef and he knew how to compose also in the kitchen, combining fine wines with different dishes, in fact there are menus and dishes from Rossini as the famous “Tournedos” (Medallions of meat) also do not miss the recipes dedicated to him.

Even the pizzerias have a reddish dish, the pizza Rossini, with boiled egg and very tasty mayonnaise, which we think the famous composer would have appreciated. 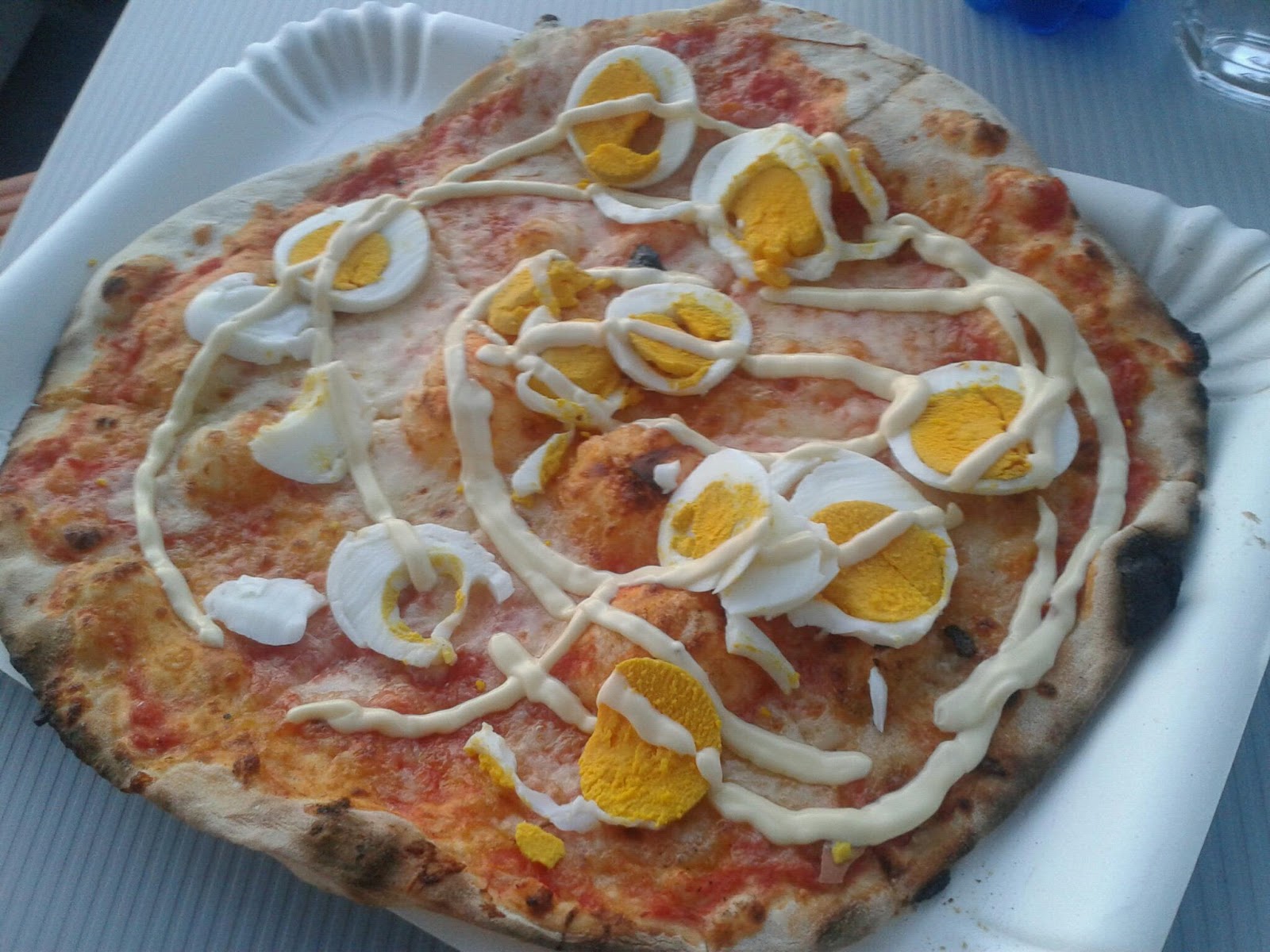 In the territory of Pesaro and Urbino, the best wine is the Bianchello del Metauro DOC.

It is the wine of the taverns, presented without pretensions and instead represents very well our tradition and Colli Pesaresi Doc, in the vineyards located in a wide area of territory of the province of Pesaro and Urbino.
"Science is a tool for cheaters". An anonymous French PE teacher.
0
«12»