The 5th stage of the Giro d'Italia goes from Frascati to Terracina. Mercifully short at only 140 kilometres, after a series of long stages, the race features two climbs in the first 30 kilometres and another one with 50 kilometres left. The rest of the route is flat. 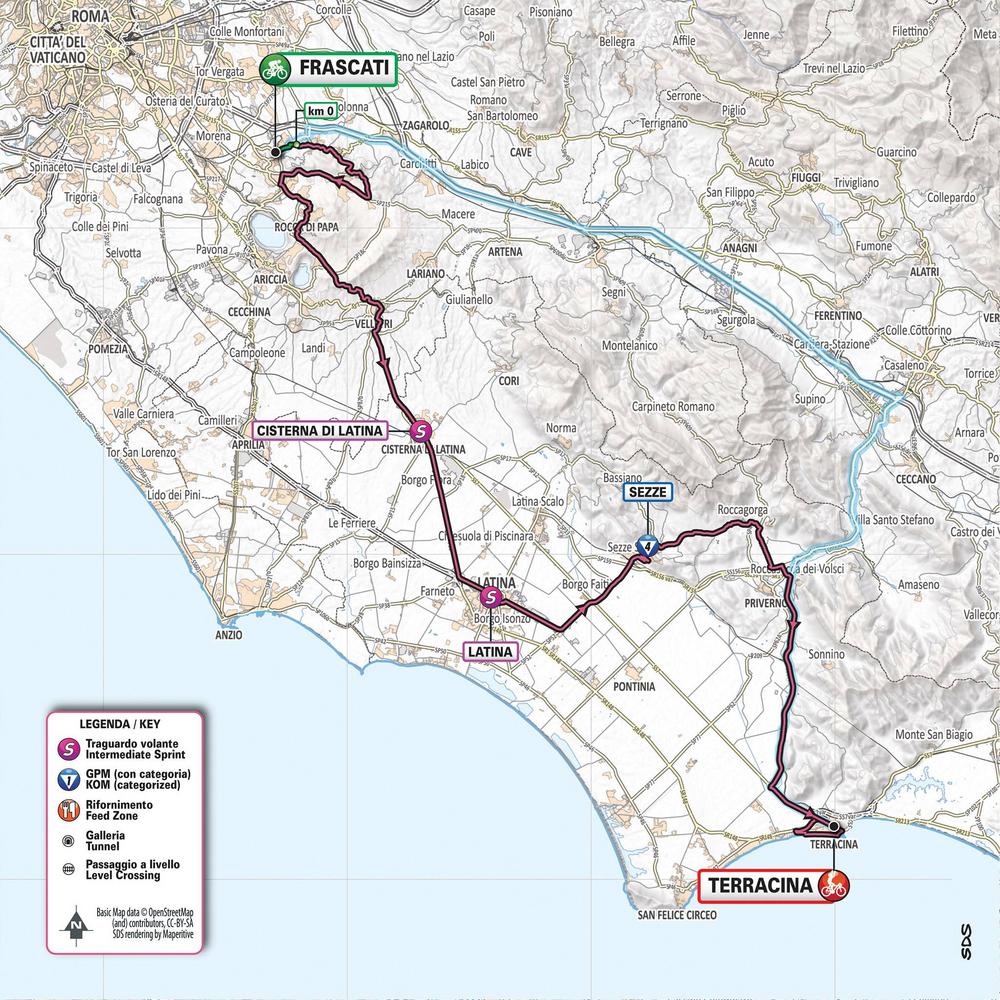 Once the flag is dropped the route climbs 9.4 kilometres to Rocca Priora*. The climb is averaging 4%, but also takes in ramps up to 10%.

Following the descent it goes back uphill again on the road to Rocca di Papa*. It is a hard climb of approximately 5 kilometres with an average gradient of 7% and maximum ramps of 20%.

* While the above profiles show the climbs as catagorized, neither are.

The route continues through the Parco dei Castelli Romani, a Natural Regional Park with two beautiful lakes. The Giro d’Italia penetrates the regio of Lazio. A long descent runs south and after more than 30 kilometres on the flat the last hurdle appears in Sezze Scalo. A 4.3 kilometres ascent at 5% leads to Sezze before the route continues a few more kilometres at a lesser gradient.

With around 47 kilometres remaining the riders fly down a descent and the last 40 kilometers are played out on the flat.

Final kilometres.
The final 9.2 km circuit takes place on broad, mostly straight urban roads. There are 3 consecutive bends between 8 and 7 km from the finish. The home stretch (1,500 m) is perfectly straight. The finish line sits on 7.5 m wide tarmac.

The finish is in Terracina, a town with 45,000 inhabitants. The last Giro arrival was in 2000 and Christian Moreni won the stage in a sprint finish.

Slightly more than 100 kilometres from Rome and 120 kms from Naples, Terracina lies on about 15 km of coastline, along the wide gulf marked by the Circeo and Gaeta promontories. The two symbols of Terracina are the sea and the Temple of Jupiter Anxur. The latter was part of the monumental complex of the ancient acropolis, situated on the top of Monte S.Angelo, which affords a breathtaking view of the entire gulf and the Pontine Islands.

Gastronomy wise, I can't find anything specific to the town, but presumably fresh fish would feature heavily. However, the local Cantina Sant'Andrea is worth a visit.