At 181.1 kilometres, stage 12 in the Vuelta runs from Mondoñedo to Faro de Estaca de Bares, a lighthouse on the north edge of Spain, overlooking the Atlantic. The finale is pepped up by a string of short climbs and narrow roads. So, it is a deceiving stage, that while at first glance seems on for the sprinters, but the rugged Galician terrain will take it's toll and prove difficult for teams to control.

Departure place Mondoñedo is situated in the northern outliers of the Cantabrian Mountains. In a valley to be precise, and shortly after the start the riders tackle the 3rd category ascent of the Alto de Cadeira – 5.8 kilometres at 6.5%. It’s a good spot to launch an attack. The summit peaks at merely 435 metres, yet this is the highest point of today’s route.
ollowing the descent the route continues on rolling roads along the Galician coast – as rugged as enchanting – to turn inland in Porto do Barqueiro. At kilometre 124 the Alto de San Pedro appears. The first 3 kilometres go up at 7% – and feature 300 metres with double digit gradients – before a short drop leads to the less steep second part. The Alto de San Pedro amounts to 7.4 kilometres, while its average gradient is 4.9%. 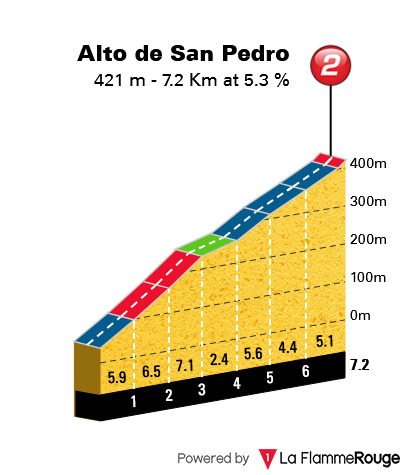 Some 31 kilometres before the line a 2.9 kilometres hill at 6% sets the tone for the finale, as a string of short climbs mark the last 20 kilometres. 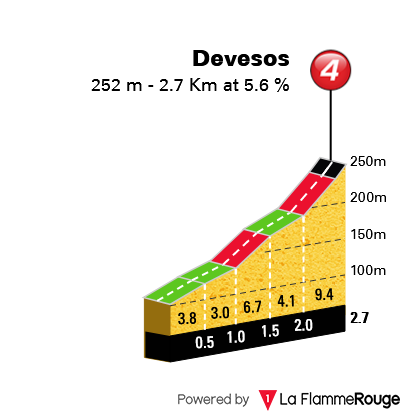 La Vuelta once again moves through Porto do Barqueiro before the roads start to become more narrow in the last 7 kilometres and even tighter 1.5 kilometres before the line. Obviously, this is good news for attackers, as it will be hard to chase them down on alley-wide roads. The finish is at Faro de Estaca de Bares, the northernmost part of Spain.

The finale is further pepped up by a 1.2 kilometres drop with 2.6 kilometres to go before a 400 metres uphill kick at 2.8% runs to the last kilometre. These are slightly descending at 3%.

Video of the final 5kms.
https://youtu.be/DO8eRBnqPvg 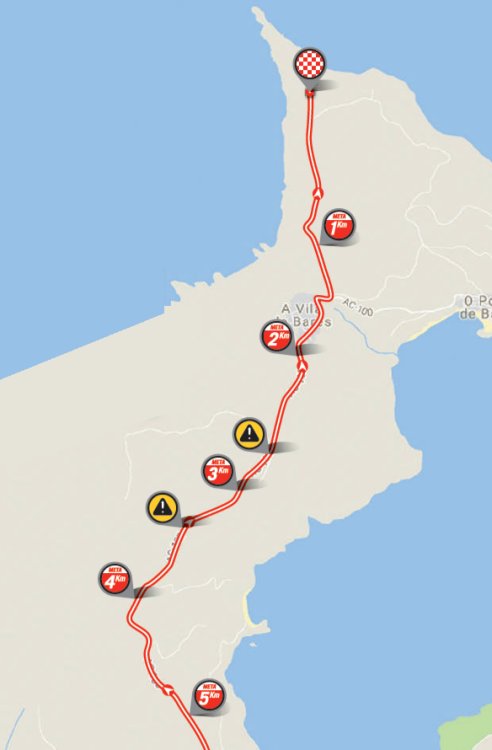 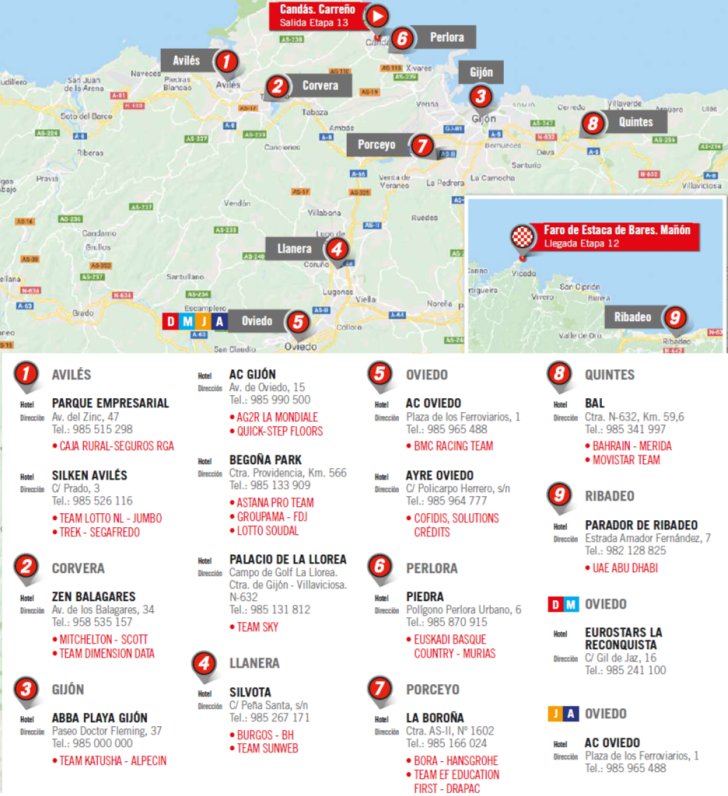 Mondoñedo is an unprecedented La Vuelta departure. The Lugo municipality took on particular historical relevance in the late Middle Ages as it was the setting of the Galicia succession of power battle between Galicians and Castilians. An episode in which the marshal Pardo de Cela, a historical figure who died in the very Praza da Catedral that the peloton will pass through during La Vuelta, was the protagonist.
Mondoñedo is a universe full of valleys and mountains, located in A Mariña Lucense, where the Northern Way of Saint James passes through.
The city, episcopal see and ancient capital of one of Galicia’s historical provinces, reflects its importance in a small city with a lot of personality, with its epicentre in the Plaza de la Catedral.

The Fuente Vieja (Old Fountain), the Saint Catherine Seminary, the Convent of the Conceptionists and the old Cemetery are some of the places that constitute this urban centre, declared a Historical Artistic Complex in 1985. Its streets feature recurring surprises such as Merlin the wizard strolling by, the sound of the horses in As San Lucas, the smell of recently baked bread and their famous cake.
Nearby is the Alameda de los Remedios, flanked by the Sanctuary of Our Lady of Remedies and the San Pablo (Saint Paul) Hospital, the district of San Lázaro, with valuable memories, and that of Os Muíños, with its artisan tradition.
The entire municipality has areas of unique beauty, including the Monastery of Os Picos, numerous settlements or natural spaces such as the Rei Cintolo Cave, Galicia’s largest cavity; the Fraga Vella, the Salto do Coro and La Fervenza.

A Coruña Province
Estaca de Bares, in the municipality of Mañón, is the Northernmost point of the Iberian peninsula. The Coruña cape, the natural area where mountains, rivers and the sea come together, is an unprecedented La Vuelta finish-line. The waters of the Sor River converge with those of the Atlantic Ocean and of the Cantabrian Sea, which are separated by this natural setting where visitors can practice a multitude of water sports or walk along its numerous hiking trails.
The municipality of Mañón forms a long, narrow stretch of land that, harmoniously, combines mountains, river and sea. It is the sweet water of the Sor River that flows from South to North in this land, making it the connecting thread that links the Faladora Mountain Range with the sea, that join, at the Estaca de Bares Cape, the Cantabrian and Atlantic seas.

Nature in its purest state, to rest and to enjoy an extraordinary setting with offers and possibilities for every taste: the Sor River can be followed along its riverbank, rest areas in which to get your energy back, bridges with stories to tell, viewpoints, an estuary with an impressive sandbank, small marine ports, clean beaches, nautical sports, hiking trails, traditional festivities to take part in, a varied hotel offer and, above all, warm welcoming people that will make the visit more pleasant. Mañón is a combination of mountains, river and sea. And so much more. Discover its natural wonders! 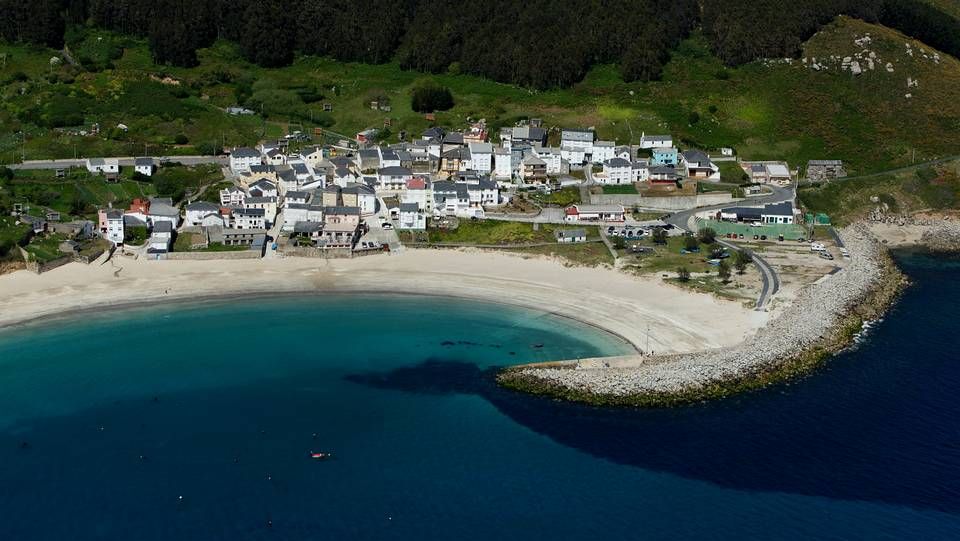