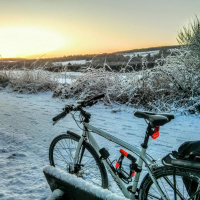 seajays Posts: 330
December 2014 edited December 2014 in Commuting chat
Well, given the ice in the mornings last week, and the forecast here for more ice and even snow this week I thought it was time to put my winter tyres on.

Note: I had not had to do anything with the tyres at all since I started commuting (and cycling!) in June.

How hard can it be I thought. So two hours and one broken tyre lever later I finally managed to get my new tyres on.

It took me ages to first get the tyre off (being a bit scared of breaking the plastic tyre lever - which I eventually did). And then when I put the new one on, at first I though "this seems a bit big - have I got the right size?", before getting to the last bit, and then thinking this is never in a million years going to go on there.

Eventually I looked up a video on youtube... where it was cleverly pointed out to make sure you get the bead in the groove of the tyre to give you the extra space you need. :oops: Lo and behold... it went on real easy after that!

So first tyre an hour and a half, then second about 20 minutes.

At least they're on now. And I've learned how to sort the tyres.
Cannondale CAADX Tiagra 2017
Revolution Courier Race Disc '14
My Strava
0