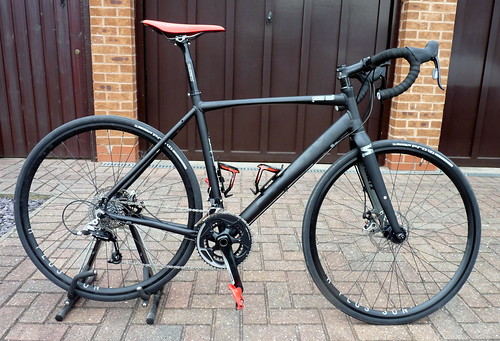 to a flat bar set-up with the following outcome 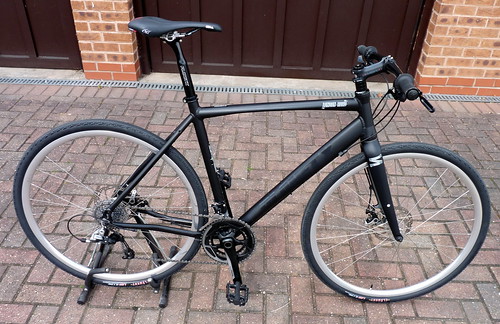 Main changes were the addition of the Ritchey WCS flat bars fitted with SRAM S-700 shifters, SRAM BL700 Brake Levers and Lizard Skins Lock-On Mini Machine grips. The rest of the groupset was as supplied originally (SRAM Rival 22 with 50/34 chainset and 11-32 cassette). I swapped my Fizik Arione over to the Pro Carbon and fitted an SQLab 611 saddle that I had lying around. He may ask to have the saddle from the Genesis but that's a 2 minute job to swap it if he wants.

I drew the line at bequething my Moonglu handbuilt wheelset since he is planning to do the majority of his riding on tracks and trails. The Moonglu's were replaced with a set of Maddux 2.0 disc wheels (courtesy of Daniel B of this parish) shod with some appropriate tyres for his planned riding (Clement LAS 700x33c file tread type). I've also fitted some flats as he would not welcome clip-on pedals of any description.

Have ridden it for a quick 7 mile thrash and it rides well even with the heavier wheels and the knobbly tyres. Shifters and brakes are all fine so I'm quite pleased with the outcome
0