dogboy73 Posts: 440
August 2021 in MTB workshop & tech
Had a disaster on the trail today. Luckily I wasn't go faster. Was slowing down and moving into lowest gear ready for a long, steep climb. Suddenly there was a lot of noise from the rear end and the pedals seized up. I quickly pulled to see what was wrong. It wasn't good!! :-/ 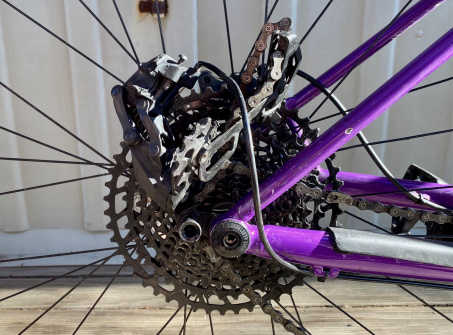 The eyelet that mounts to the hanger had snapped off, allowing the derailleur to move up and get mangled around the seat stay dragging the chain into the wheel spokes. So the derailleur is toast. Chain is also badly twisted so will probably need a new one + the seat stay paint has been badly scratched up. Bit of a disaster.

Was wondering if anyone else had had issue with this part? The eyelet on the derailleur just totally failed. A bit of it was left but I was able to snap it off really easily like it had become extremely brittle. Not impressed with this component. I've had gear hangers fail but never seen this before. The hanger is actually fine. One of the only bit in the area that survived unscathed ironically.