whyamihere Posts: 7,587
March 2021 in Bike parts for sale
I'm moving house soon, and have amassed a pretty huge volume of bike bits which I'm unlikely to ever use again and don't want to just drag to the new house. This is the first wave, I'm sure I'll find more as we pack and declutter. I'd prefer to have these collected or could deliver if you're within reasonable distance of Walsall/Wolverhampton. If not though, I could post as long as there's a contribution towards costs.

If you need any more details or more photos, let me know. 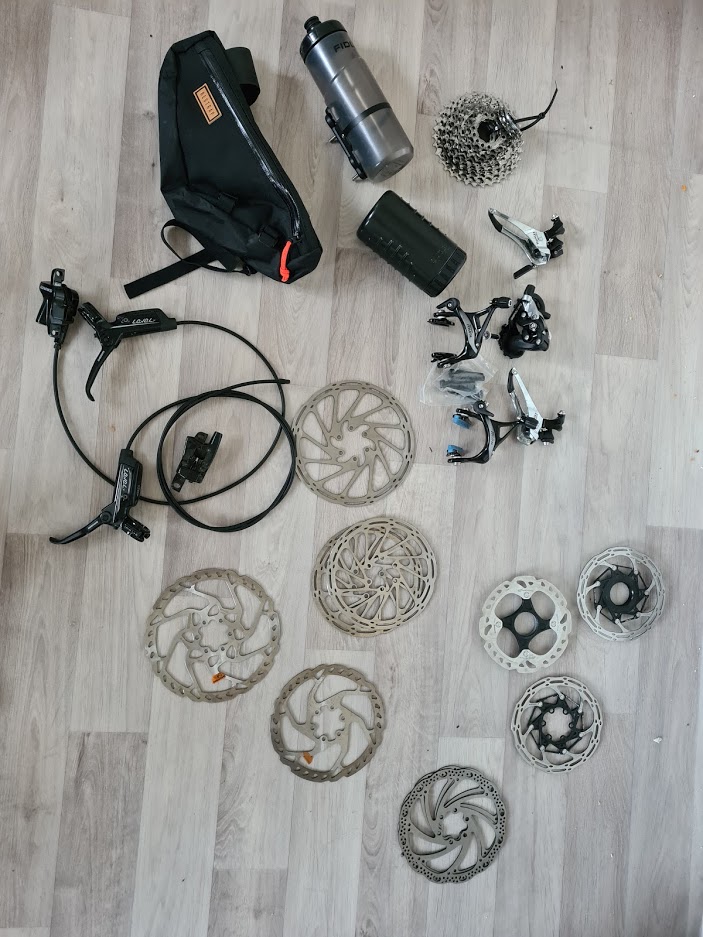 Parts in this photo:
- 2x Sram Rival front derailleurs, one with a chain catcher, one without. It does have the attachment for a chain catcher though, so if I find it, that would be included.
- 1x Sram Rival short cage rear derailleur
- Sram Rival rim brakes. I have blue pads for carbon rims (one pair not shown in the photo) and rubber pads for alu rims.
- Shimano 11 speed 11-34 cassette, I think 105 level. Little use, I didn't like the gaps.
- Fidlock cage and bottle. Used on one ride, didn't particularly like the process of putting the bottle back on the move.
- Fabric cageless tool keg. Includes the little nubbins that attach to the bottle cage mount on the frame. Not much use, I bought it to fit to a mount under the downtube on one of my bikes, but it was slightly too wide.
- Restrap frame bag. I think this was actually fairly expensive, but I just don't use it.
- Sram Level T brakes. Front is complete and bled, rear may need a new hose as it was internally routed so I had to cut the hose to remove it.
- Disc rotors, lots of them. There's Sram Centrelines in 140mm, 160mm, 180mm, mostly 6 bolt but one centrelock, 180mm and 160mm 6 bolt Shimanos, a 140mm centrelock Shimano and some generic 6 bolt 160mm ones.
0