At 153 kilometres, stage 9 on the Tour de France serves the second test in the Pyrenees. The race between Pau and Laruns tackles three ascents to an elevation of more than 1,000 metres. The finale flies downhill into the valley for a false flat run-in of 6 kilometres.
Pau is the most visited location in Tour de France history. In 106 editions the town hosted La Grande Boucle 72 times. 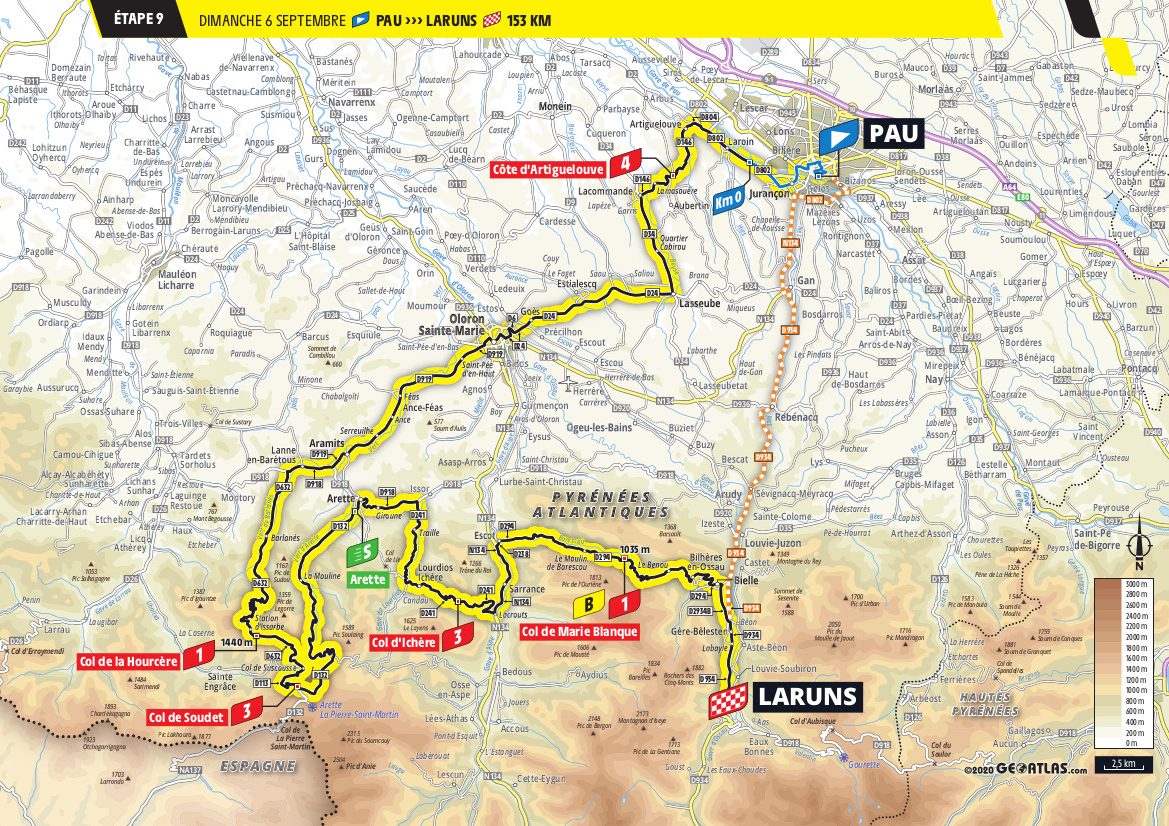 The mountainous program of the day starts with the discovery of the Col de la Hourcère which will immediately precede the climb to the Col de Soudet. For the seventh time since the beginning of the Tour, the riders will ride at an altitude of over 1,500m. They will then battle it out on the extremely steep climb up to the Col de Marie Blanque before heading back down to Laruns. 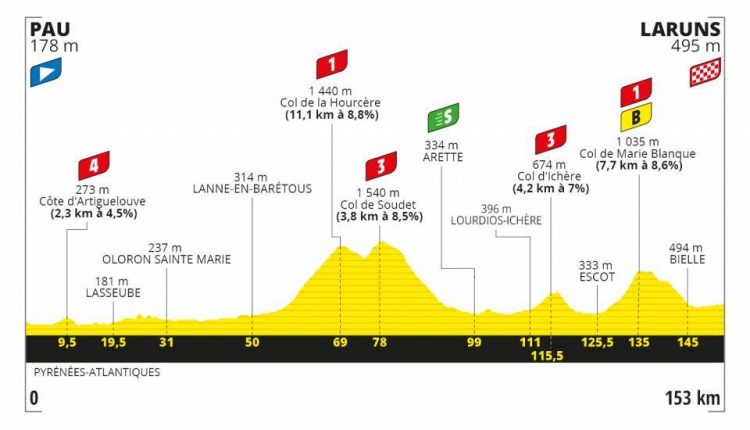 The riders leave Pau for a virtually flat opening of 50 kilometres. Then the Col de La Hourcère appears, which is a tough test. The ascent is 11.1 kilometres long and slopes at 8.8%. A short descent leads onto the next climb, the Col de Soudet. Peaking out at the highest point of the day (1,540 metres), the ascent is 3.8 kilometres at 8.5%. 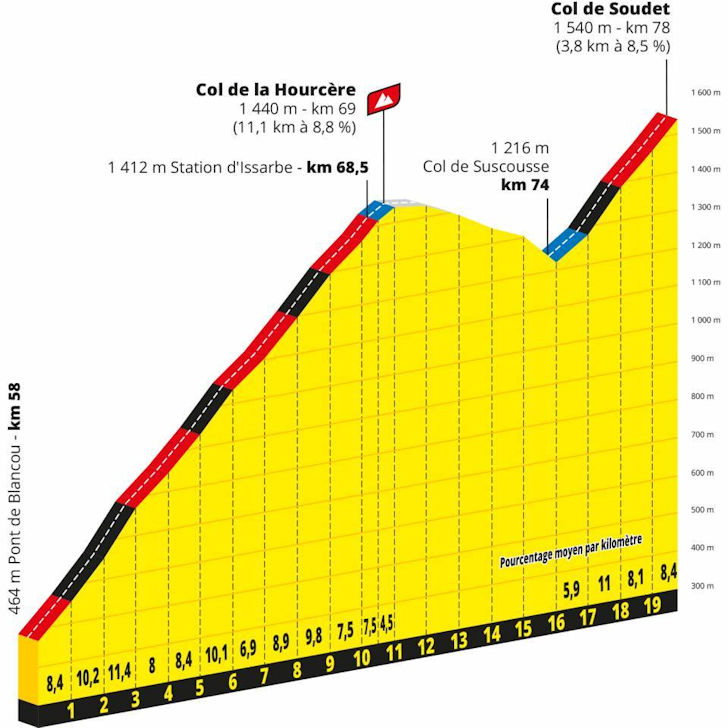 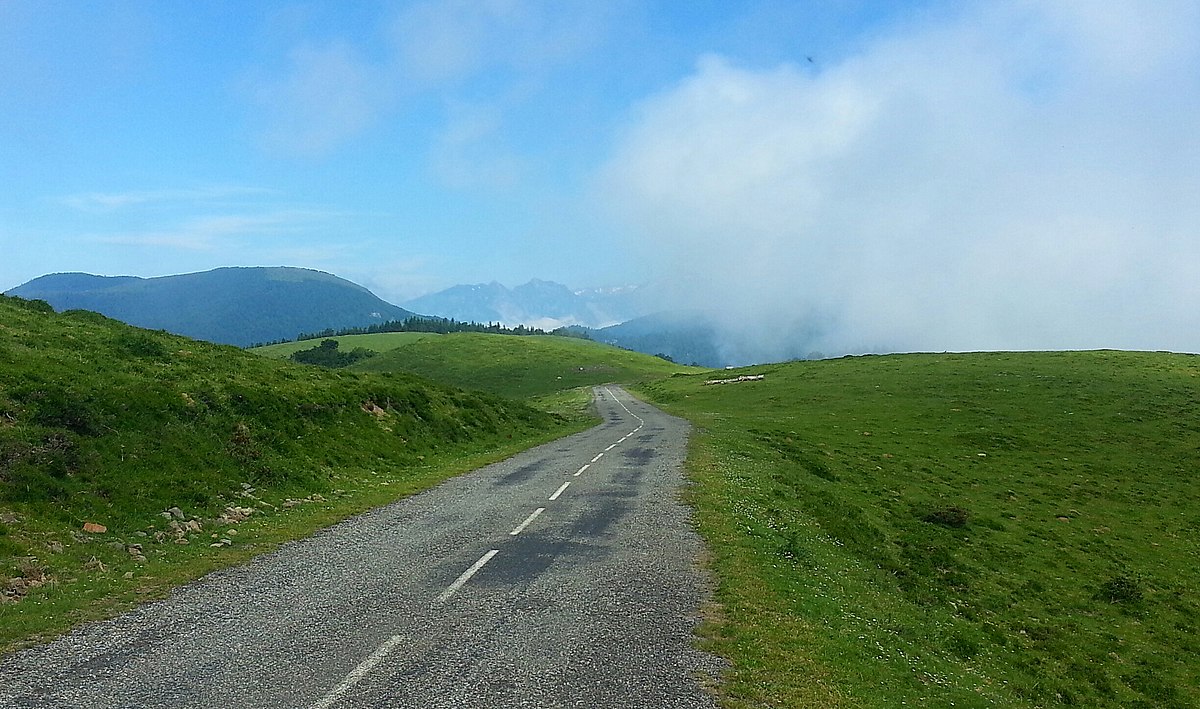 A descent of roughly 20 kilometres takes the riders back into the valley before they tackle a hilly zone leading up to the last climb. The Col de Marie Blanque is 7.7 kilometres long and the average gradients sits at 8.6%. So that’s yet another steep climb, although the first part is doable. Consequently, the second part is even harder with gradients hovering around 12%. The first three riders over the Marie Blanque gain time bonuses of 8, 5 and 2 seconds. 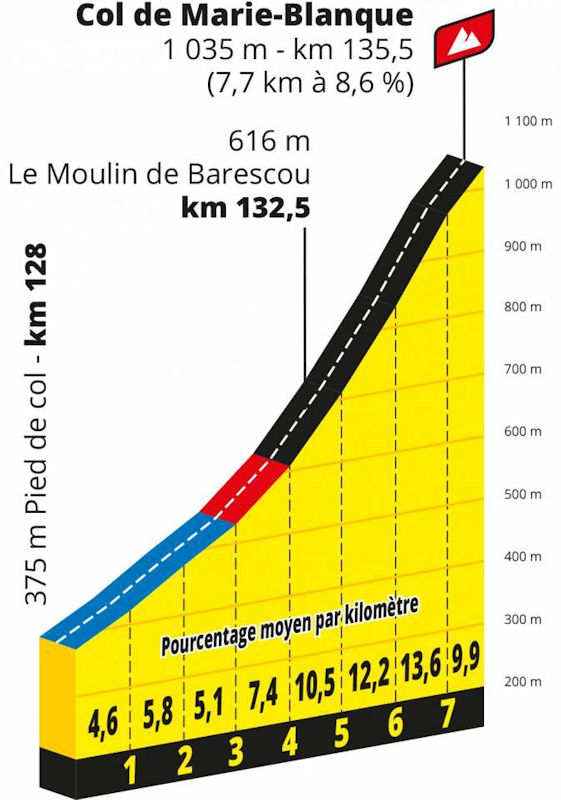 A downhill of 12 kilometres flies down into Bilhères-en-Ossau. The riders storm through the village to tackle the last 6 kilometres, a section that runs slightly uphill.
Two editions ago the Tour also featured a finish in Laruns. The riders came from the other side. After attacking in the downhill of the Aubisque, Primoz Roglic outgunned a group with Geraint Thomas, Chris Froome and Tom Dumoulin. The Slovenian took the spoils. 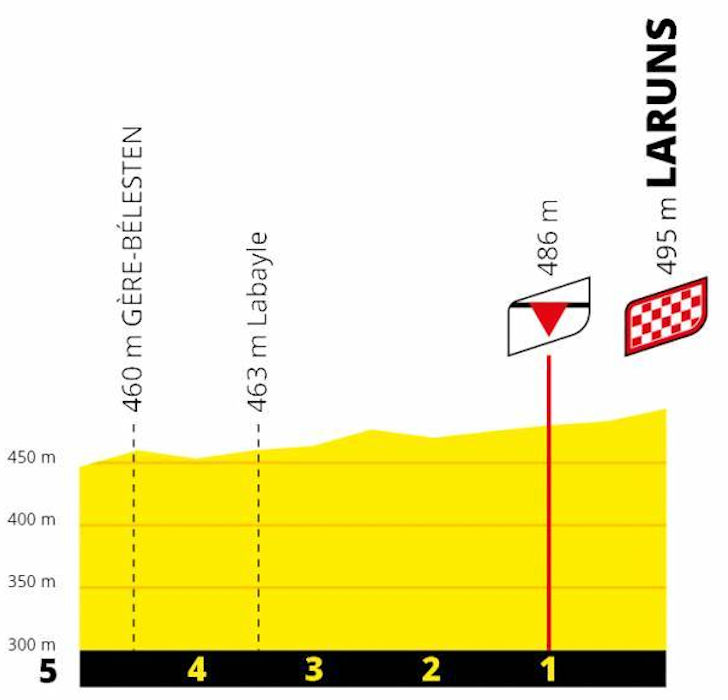 Both Pyrenees stages on this year's Tour de France finish downhill. Doubtless, crazy descender Julian Alaphilippe does not mind. One could argue that this route is tailor-made for him.
Not for the first time this Tour the question springs to mind: breakaway men of GC riders? Both scenario’s are viable and a lot will depend on the GC.

Population: 77,600 habitants
Pau is receiving the Tour de France for the 72nd time and their common history started in 1930. A basecamp before or after tackling the Pyrenees, Pau has been the start or finale of all types of stages, as the winners list confirms. Climbers like Rene Vietto or Fausto Coppi, attackers like Pierrick Fedrigo or sprinters like Sean Kelly, Erik Zabel, Robie McEwen or Arnaud Démare all raised their arms in the capital of Bearn. Last summer, Pau celebrated the 100th anniversary of the yellow jersey in style thanks to Julian Alaphilippe, who not only won the time trial on the day’s menu but also strengthened his GC lead.
With so many starts and finishes on Boulevard des Pyrenees, the Tour could not fail to create cycling vocations and many riders were born in or around Pau. It was the case for Victor Fontan, winner of two stages in 1928 and a yellow jersey holder in 1929, or 1956 team time-trial Olympic champion Arnaud Geyre and more recently Stéphane Augé, who rode the Tour eight times, Mathieu Ladagnous, with six participations, and Team Ineos DS Nicolas Portal, who sadly departed in Spring after leading his riders to six Tour de France victories. 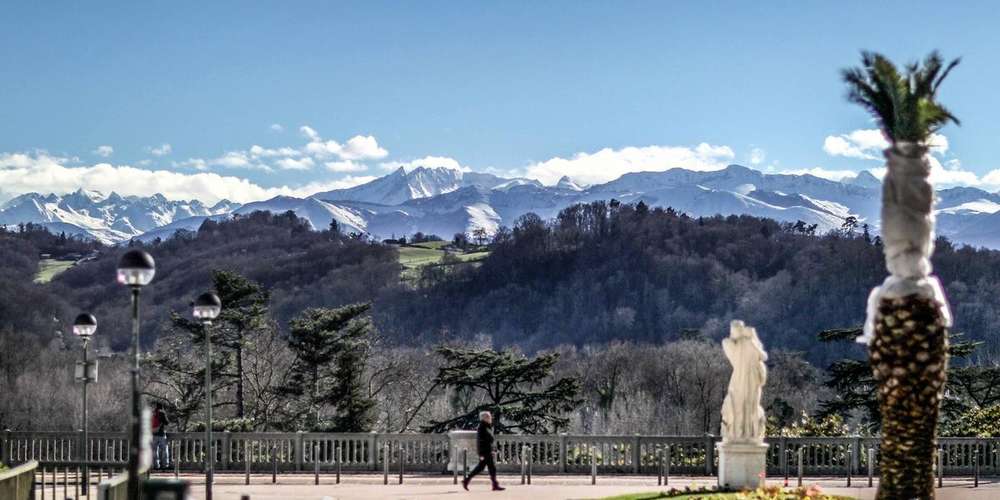 Population: 1,200
On the 2018 Tour de France, Laruns hosted a finish which saw one of the boldest and most skilful descents of the Aubisque by Slovenian, Primoz Roglic.
Laruns was in 1985 the start of half-stage on a great day for team La Redoute. Their leader Stpehen Roche won at Col d’Aubisque in the morning, challenging La Vie Claire joint leaders Bernard Hinault and Greg Le Mond. In the afternoon, Roche’s teammate Regis Simon, beat breakaway companion Alvaro Pino on the road to Pau. 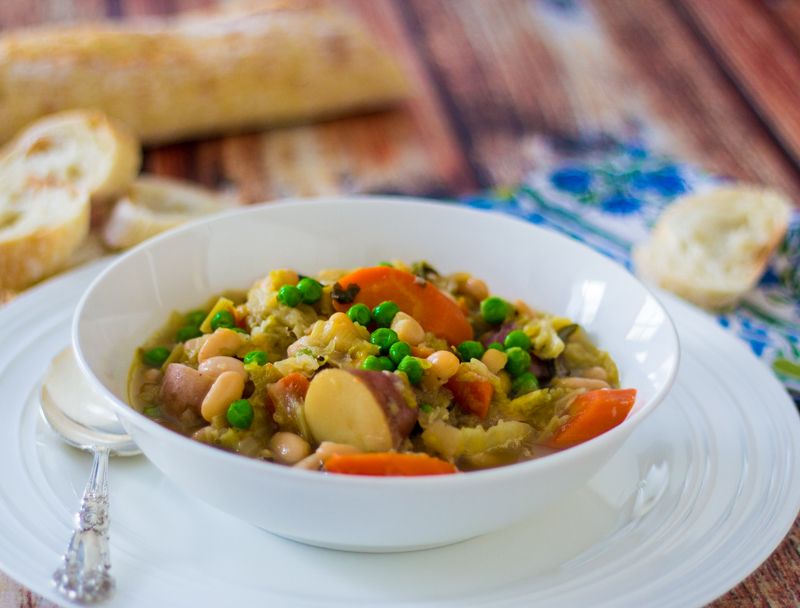 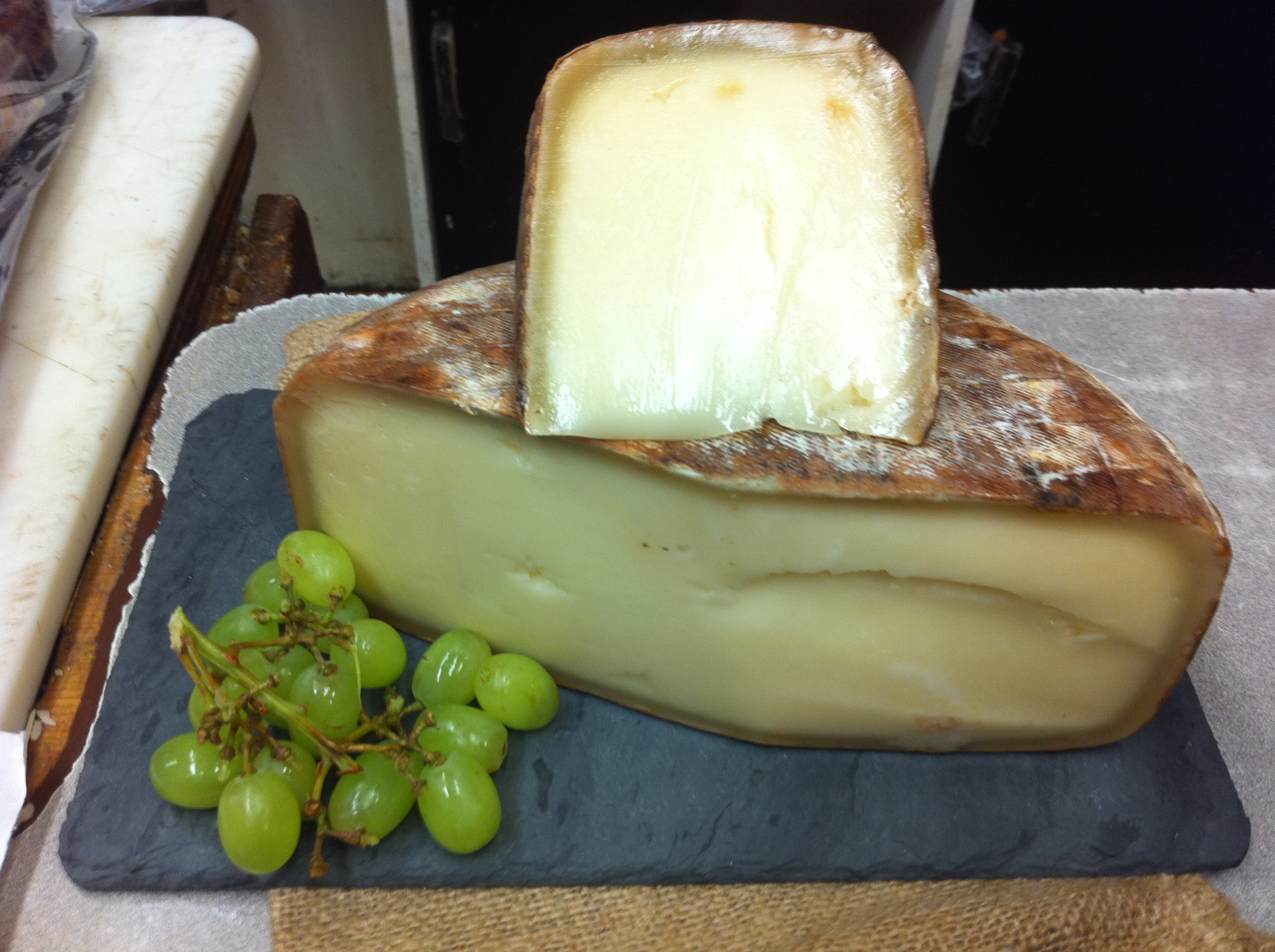