About to pull the trigger on a FS MTB.

Obviously there is slight spec changes like GX gear’s v NX, revelation fork’s v a pike but on a beginners scale it’s saving me some serious money as both bikes are far better and will continue to be far better than my ability!

The 2 bikes are from the same manufacturer albeit different models, one is a XL (last size they have and also the cheaper of the 2) and one is a L.

I’ve rang and spoke to the maker and I’ve told them that I’m 5’10, 31ish inside leg, currently ride a 19 inch Large Hardtail (a decathlon rock rider 520) And not the smallest built of blokes.

On the geometry when comparing both, there really appears to be not a lot in it, but were adamant I needed a L and the XL would be too big

Of course in an ideal world I’d love to try and see them pre parting with cash, but current situation and the lack of stock everywhere dictates otherwise. 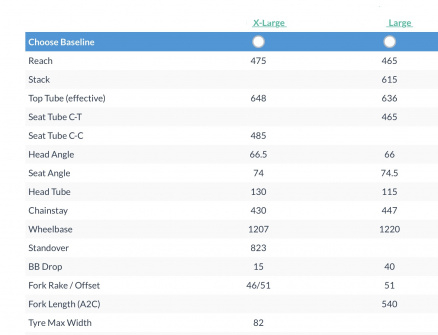