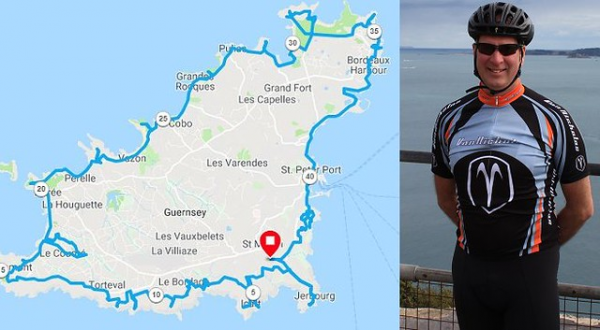 Cycling around the Coast in Guernsey, the view from Jerboug.

I had visited Jersey earlier in the year, I enjoyed riding around the coast so much that it inspired me to repeat the experience on the neighbouring island of Guernsey. As I had done with my Jersey trip much of my decision was based on a favourable weather forecast; if it looked awful I wouldn't go, if it looked good, I would! In the event I decided to chance it, booking just two days before leaving; both ferry (bikes go free and you just wheel them on) and accommodation easily done in a matter of minutes with a few clicks on my laptop. My base was to be near 'St Martin' on the south west coast, staying at the excellent 'Queens Inn', reasonably priced with secure storage for my bicycle. 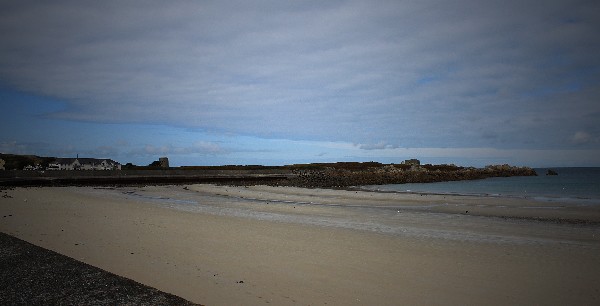 I visited many of the bays and view points.

Guernsey offers quite a variety of cycling for such a small Island, the Southern coast consists of quite a few cliff top 'view points' and with descents into small picturesque bays and harbours, where as the northern part of Island is much flatter as you follow the coast much closer. The plan was to ride clockwise from my base at 'St Martin' and ride mainly around the coastal perimeter, visiting viewpoints and beaches with the occasional swoop inland for variety. 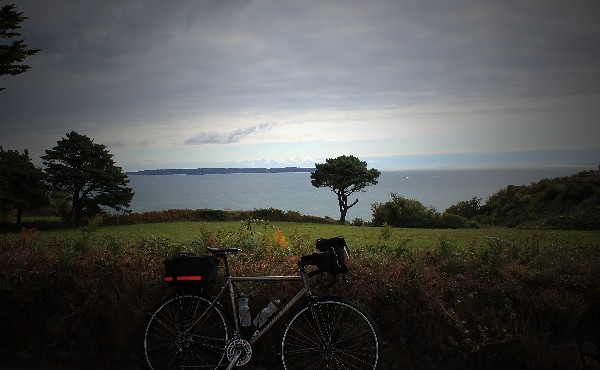 I had actually intended more cycling inland but 'tweaked' my planned route as I went, in part as I could see I was trying to outrun an isolated rain shower that was clearly starting to look ominous out at sea, plus the early section of my route was hilly, often with steep descents to a beach with the same steep climb back out again; many along stunning tree lined lanes. So steep were some of these climbs that on a few occasions walkers shouted encouragement, meaning that each time I felt honour bound to continue puffing my way past with my best 'not trying hard' face with a cheery "thank you" to retain the illusion of my fabulousness! By the time I reached the beaches along the north west coast my desire for tree lined lanes that went uphill had been fulfilled and I was far more inclined to follow the stunning shoreline road, which was also seductively flatter, plus the added incentive that there was quite a strong tail wind so I felt I had more chance of out running that shower, which was rapidly catching up with me.

Even the main roads on the Island are quiet, I seldom spotted a car, although they were more frequent along the north coast it was still incredibly quiet and peaceful. This part of coast is one picturesque sandy bay after another, each requiring a quick pause to drink in their tranquillity and splendour, for me it is what cycle touring is all about; taking time to fully absorb and enjoy the moment. 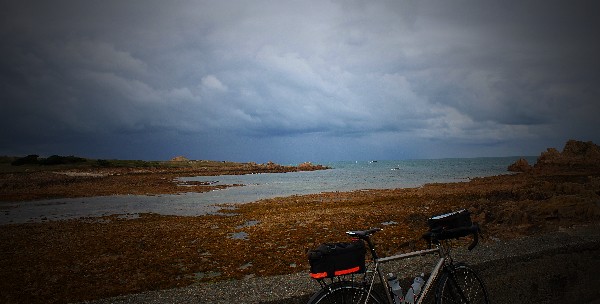 The North Coast is dotted with beautiful bays

Admittedly mid September is not the height of the holiday season but it struck me just how quiet and stress free the Island seemed to be, it's like time has stood still and the busy 'time poor lives' that many of us now endure do not seem to apply here in Guernsey; no one seemed in a rush, no one seemed under pressure, no one seemed stressed and everyone seemed to have a peaceful calmness about them; even the bus drivers seemed chilled! On that note with my Guernsey Puffin pass each journey was only 55p and I could do the whole Island for that on some bus routes; although I was caught out that they do not operate on a Sunday evening! 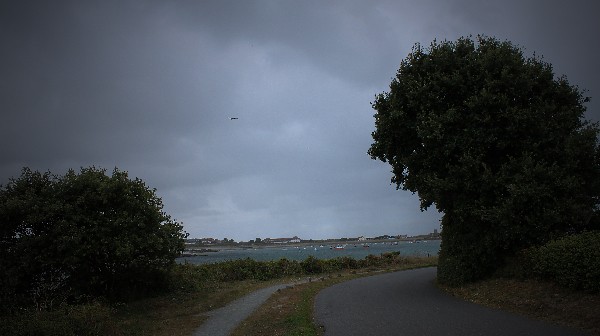 The coast road meandering around yet another tranquil bay

Many of the bays and viewpoints had refreshments stops, even if it was just a kiosk linked to an attraction there often seemed like there was an opportunity to take a break if I desired, but seeing as I had stopped frequently to admire the sights it wasn't until Pembroke Bay at the northern tip of the Island that I decided lunch was in order; which coincided with the shower that I had been watching attentively all my way up the coast finally catch up with me; the Beach house was suddenly very popular as many rushed in to shelter from the rain. 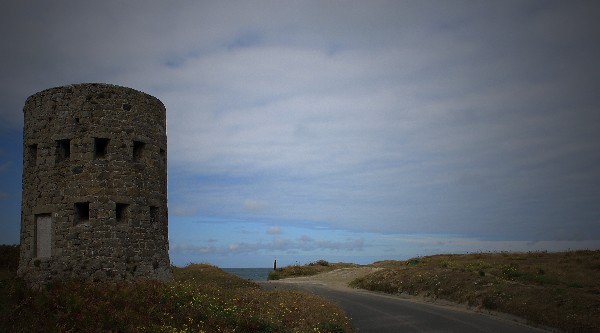 At the Northern tip of the Island at 'Mont Cuet' and 'Pembroke bay ' I turned right to head towards Bordeaux Harbour, it's not long before 'Herm' and 'Sark' come into view, even though still cloudy both islands were clear to see and once again I couldn't resist pausing to soak in the view. Frequently stopping like this is something I seldom do at home but in many ways I don't see the point in whizzing along and potentially missing what there is to see; over the years I have learned to factor this is when planning a ride on holiday and allow far more time to cover a similar distance. 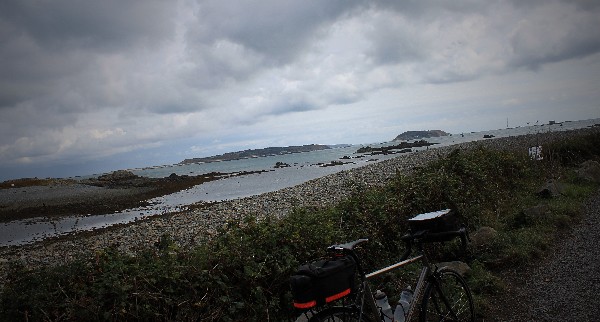 It doesn't take long before you see the ferries and cruise ships on route in and out of St. Peter Port, some of the latter are enormous as I was to see on the days following, they must make a tremendous difference to the island's tourist industry, it's like a town has just parked up outside and everyone jumps off to explore! Fortunately the passengers don't have their cars with them so to me it made little difference. 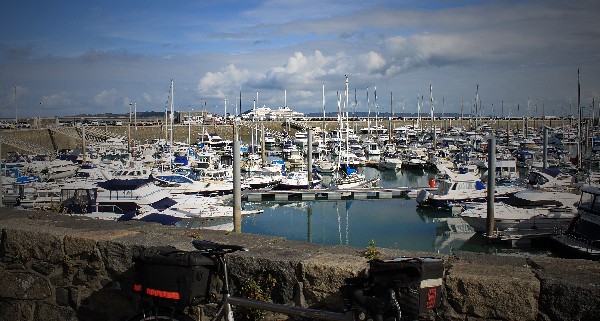 By now the sun had started to warm the air, I had been in shorts and short sleeved jersey all day and was thoroughly enjoying the mid September warmth that made for very comfortable cycling, especially as the wind had also dropped after the short rain shower; a double 'win win' bonus for any bike rider! 'St. Peter Port' is the main town with plenty to see and well worth a visit, although I did see two cars queuing at a junction so care is needed! As I climbed out of 'St. Peter Port' back I once again started to dip in and out of the coast as I neared 'St Martin', it had been a pleasurable 43 miles that I will remember and treasure for ever. 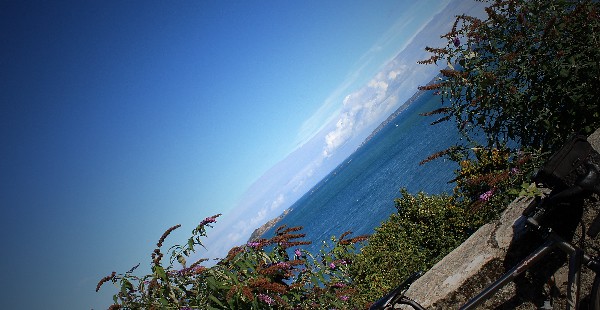 Looking back out along the coast after St. Peter Port.

In conclusion, I can highly recommend Guernsey, a wonderful Island with wonderful cycling. The only negative is I definitely wouldn't recommend getting there by Condor catamaran ferries, my return ferry was cancelled for three days running, a right faff as no one answers the phone for an eternity, meaning I had to visit the port to rebook, then find and then pay for alternative accommodation; even the sailing that did finally go changed significantly several times! Apparently this was due to the 'weather', meaning you receive no compensation!!!.The staff at the terminal repeatedly told everyone that we could claim mind you; possibly as the weather at the Port was lovely, my picture below taken just before I had to go back and join another long queue to rebook; no wonder they were telling everyone what they wanted to hear. In hindsight I would have taken a slower, admittedly quite a bit slower traditional single hull ferry, much more room, much more comfortable but much more reliable than the catamaran as far as I am concerned; 'tortoise and the hair' is an analogy that springs to mind. 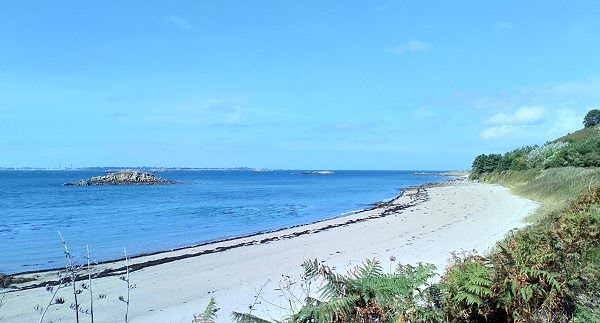 Visiting Herm on the day my Condor Ferry was due to sail; cancelled due to weather!
My personal cycling blog
0
Sign In or Register to comment.