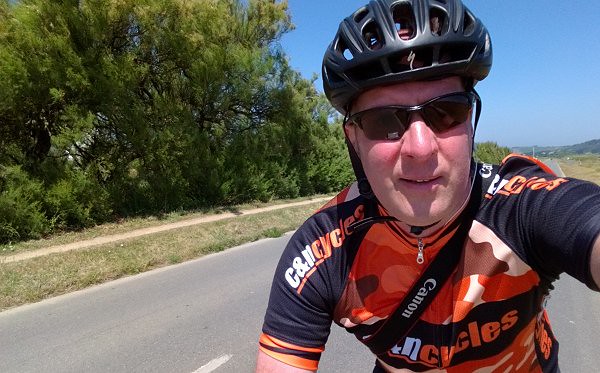 I've always enjoyed cycling around islands, it feels like you've maximized the potential of your holiday if you can say to yourself that you ridden around all of it! Jersey had been on my wish list for sometime, I had done enough research to know that it may be be a relatively small Island but it had a lot to offer a cyclist, quiet pretty wooded country lanes inland as well as the coastal route that seemed to offer something different around every bend. It is also easy to get there with a bicycle, as you don't have to fly and endure the rigmarole these days that goes with getting a bike on a plane; with a ferry you simply turn up as a foot passenger, park the bike on the ferry and away you go! Within a few minutes of looking at the Condor Ferries website I found myself clicking away and booking a return trip, bicycles go free so you only pay 'foot passenger' rates. The destination port was St Helier and within a few minutes of online searching I found the Westhill Country Hotel that had secure cycle parking, the ideal location and with "very good" reviews on Google I decide to click and book; all quick, easy and hassle free; it turned out to be an excellent Hotel. 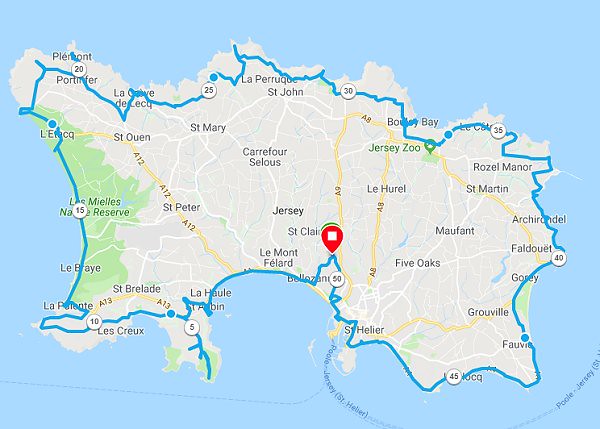 My Cycle route around Jersey. Scroll to bottom of page for more details.​

I had plotted a clock wise course around the coast line that took in every little bay, beach front and viewpoint that took my fancy, from the popular tourist spots to secluded bays, if I liked the look of it, I visited it. At fifty miles I knew that would give me time to sample the delights that each had to offer, should that be a cheeky espresso, a photo opportunity or just to pause and drink in the view; any excuse for a power rest.​ 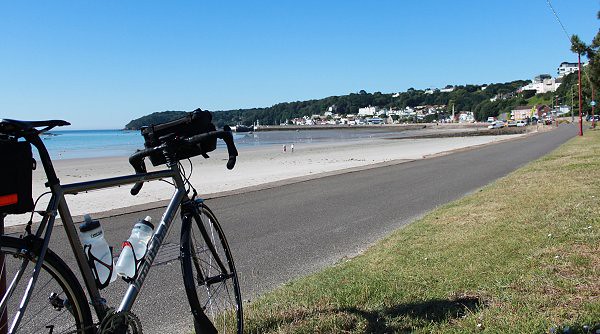 My day began on the southern part of the island at St. Helier, swooping west along the beachfront cycle path at St.Aubins Bay to their pretty little harbour, where that I noted I could get the famous Jersey Oysters, definitely something I was going to savour at some stage; my tummy told me it was far to early to be 'oyster o'clock' so I pressed on, climbing up to the first of what was to be numerous view points, 'Noirmont Point'. Unsurprisingly this was also the first of the many world war two observation posts and bunker systems that populate the island, some of which along with the forts and towers from previous conflicts are now converted to holiday lets or museums. For me this strikes a healthy balance of not forgetting and honouring the past, yet showing that we have moved on.​ 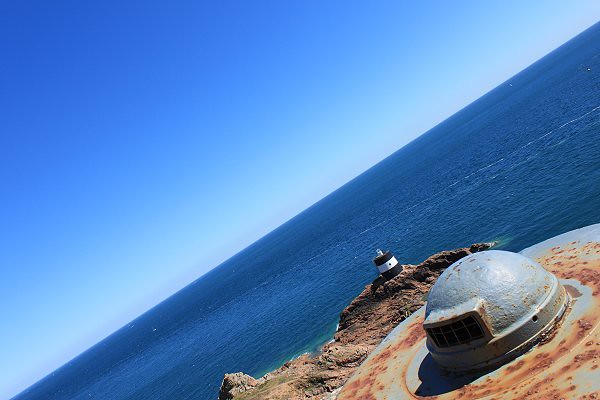 St. Brelade's Bay was next on the agenda, often referred to as millionaires row it was clear to see the attraction, recently voted the UK’s third best beach, the bay itself is stunning and the adjoining properties looked every penny of the many many millions they're valued at. Yes it attracts the rich and famous but it's popular with tourists too, it has a cosmopolitan vibe with cafes and breach front restaurants for those wanting to pause and soak up the view and watch the world go by. This busy tourist spot compliments the contrasting feel of some of the more tranquil bays around the island; I loved the variety, each feels different yet each feels unique and rather special. 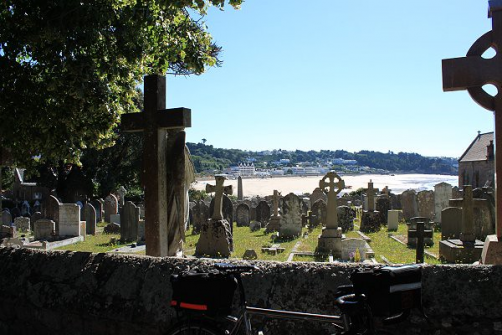 Climbing out of St Brelade's Bay.​

Although you often need to climb out of many of the sandy bays most climbs are short enough to stop you bursting into tears, yet challenging enough to warrant a guilt free reward at the next refreshment opportunity; I'm delighted to say there are plenty of those! I for one can sniff out an espresso from a thousand yards and constantly don't need much convincing that I deserve it sooooo much I just have to stop; plus my bike is tired, it needs a rest! 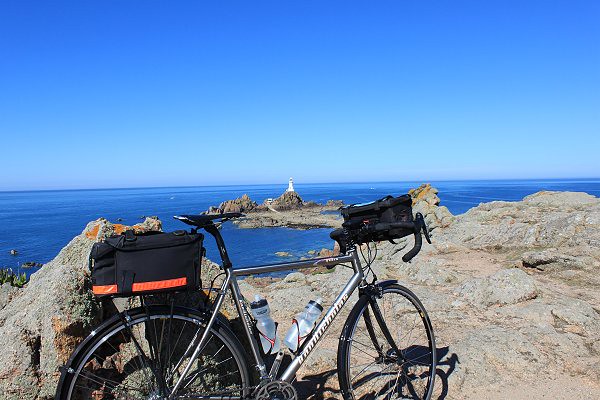 At the South West corner of the Island you turn to head north at Corbiere Point, with a causeway links the lighthouse to shore at low tide, along with it's WW2 bunker system and MP2 Tower this is another must see on the route. From here it's a short ride up and over to St Ouen's Bay, which has the longest beach on the island one side and Les Mielles Nature Reserve on the other. This stretch of the coast offers about five miles of flat cycling that results in most of the west coast simply whizzing by with little effort, before climbing up to Grosnez castle where you effectively turn right to cycle along the north coast. 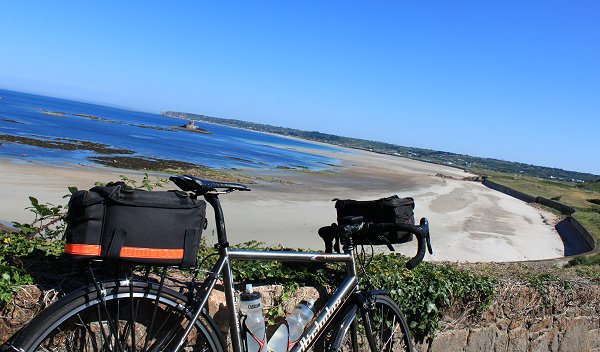 St Ouen's Bay has the longest beach in Jersey.​

It's the north coast where the stunning viewpoints and bays increase in frequency along with the going 'ups' and 'downs' between each. The Jersey.com wesbsite promotes their own coastal cycling 'Route 1' that cherry picks the best of these and misses some of the more severe climbs. I personally visited more than that route promotes which of course made it slightly more challenging; worth the effort though. Nearly all of the bays I'm pleased and on more than one occasion relieved to say had both refreshment stops and comfort facilities. As this was the most challenging part of the route I needed far less persuading that I thoroughly needed a glass of something while I stopped to rest my legs, refuel and enjoy the view before wobbling back up out of the bay. Many of the connecting routes between each bay meander up and down tiny tree lined pretty green lanes that contrast with the 'as far as the eye can see' views that are often just around the next corner; cycling paradise. 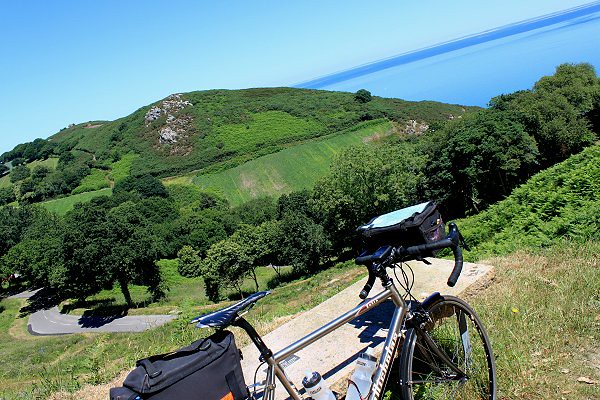 Climbing out of Bouley Bay on the north coast​

After bobbing up and down the north coast you start to turn right at 'Rozel' then 'Fliquet' Bays and head south down the east coast; like the west coast it's easier cycling as the route is flatter, following the beach with only the occasional cheeky climb. Gorey harbour is overlooked by Mont Orgueil Castle and one of the route highlights, even if you are not into castles, there's no denying it's the perfect setting; simply stunning. 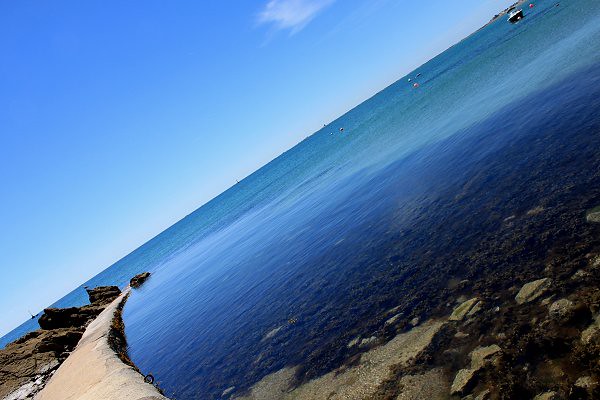 From the castle you head south then loop back into St. Helier, in my case my lunch stop although I could have had several opportunities for food on the way round if needed. This was a wonderful route that offered so much variety, on what was a wonderful day, on a wonderful island; absolutely perfect!

I've linked to my route that you can download my GPX file if wanted (click for link) that you can then edit to your needs via many websites for free (Garmin Connect, Ridewithgps to name just two, there are plenty of others); take my hotel out of the course plus I made a couple of excursions just after Noirmont point that I decided to abandon for example
My personal cycling blog
0