Subsequent to the cold feet discussion (Cold Feet), I too suffered the cold weather yesterday on my commute.

Not feet, but hands!

On the bargain thread (Thread to tell everyone what bargains you've spotted!) I posted this at beginning of October:

I bought this on Sunday: 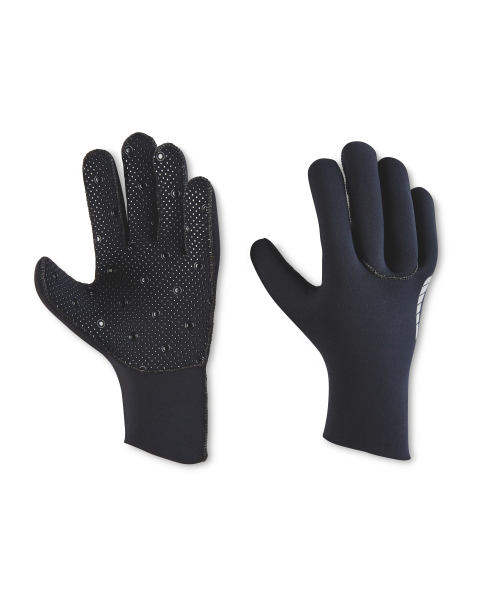 Won't be using gloves until much colder but I was using my surf gloves (3mm) last winter and it was such an amazing idea (water + wind proof). Bought another pair for cycling!


Yesterday morning was really cold so I wore Aldi neoprene gloves for the first time.

IT WAS USELESS!! My hands were in pain from cold after 5min and by the time I got to work (14.5miles and 50min later) I lost my sensation of all my fingers. That was really no fun, and dangerous.

This is what I noticed. The seams and stitching on Aldi gloves and my Alder wetsuit surf gloves were completely different. Some background information on different techniques to stich / seam together neoprene: Wetsuit Stitching.

My surf gloves were glued and taped. No stiches.

Aldi cycling gloves were flacklock stitched. No glue or tape. This meant that every stitching create pin censored holes and allow outside air to penetrate the neoprene. At speed and hands being one of the most exposed parts of the body when cycling, this is exacerbated when cycling. Hence the gloves did absolutely nothing to keep my hands warm. This was apparent by blowing air into the gloves as if to blow into a balloon; the gloves didn't inflate at all and I can hear air escaping from everywhere through the gloves!

Last night when I got home, I applied a layer of wetsuit repair glue (McNett Black Witch) on the inside of the gloves.

By this morning the glue was dry and I blew air into the gloves; they both inflated with some air still leaking. It meant that most of the stitching holes have been sealed by the glue.

I wore Aldi gloves this morning to work. MASSIVE IMPROVEMENT! My fingers still got cold but no where near the pain I felt yesterday (perhaps it was a bit warmer this morning). So when I go home I'll apply the glue on the outside to make double seam to minimise any air coming into the gloves.

I like the lightness, dexterity and waterproof / windproof (allegedly) property of neoprene material. But it’s useless if it allows outside air to penetrate through the gloves. I thought I'd share my experience as not all neoprene gloves are constructed in the same way (allegedly the cheaper neoprene gloves are likely to be flatlock stitched and no glue / taping) but with a simple "modification" a useless pair of neoprene gloves may have a chance of being vindicated to its claimed benefits!

Happy and warm cycling everyone!
0