Too dangerous for cyclists to be on the pavement they say..... 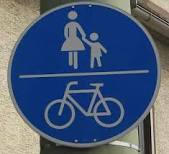