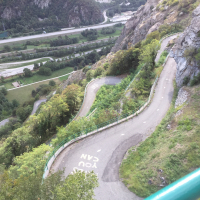 markyone Posts: 1,106
October 2012 edited October 2012 in The bottom bracket
WTF leeds fans are a disgrace and always have been,poor chris kirkland
did not know what was coming,this gutless w**nker can punch someone
and then run and hide what is football coming to.
http://www.youtube.com/watch?v=aWhsCyig4t4
Colnago c60 Eps super record 11
Pinarello F8 with sram etap
0