The 4th stage of the Giro d'Italia is 140 kilometres long. The riders ascend and descend the 20 kilometres long Portella Mandrazzi around the halfway mark, while the last 30 kilometres are flat.
The last stage in Sicily is the shortest of the whole race. 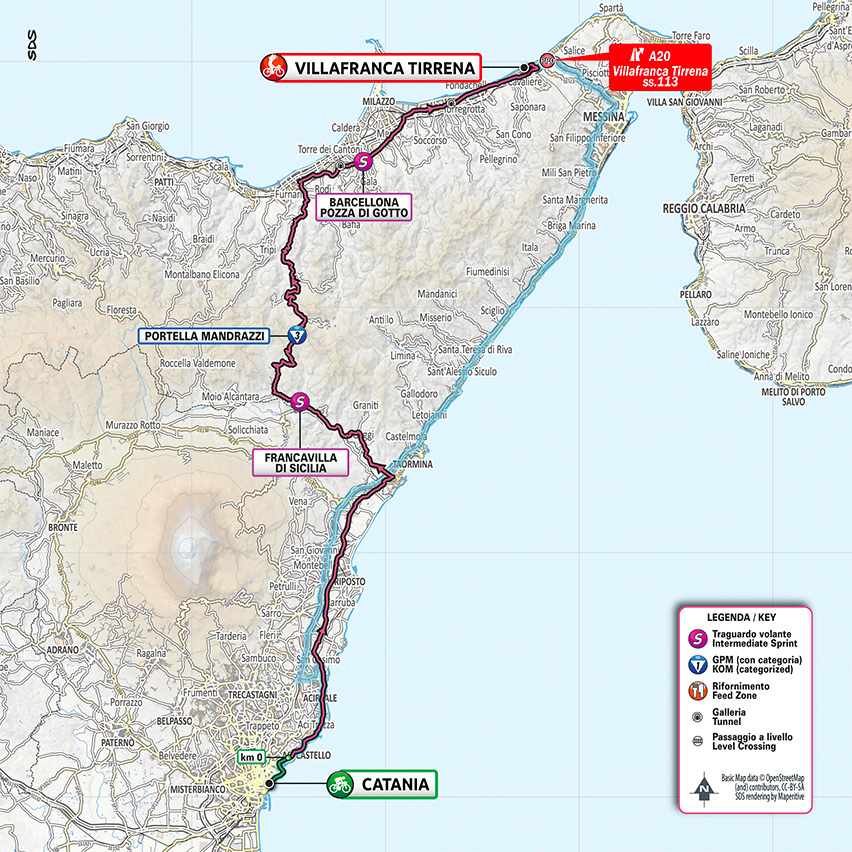 The stage profile could best be described as unusual, with what at first glance looks like a huge lumped right in the middle of mostly flat terrain. 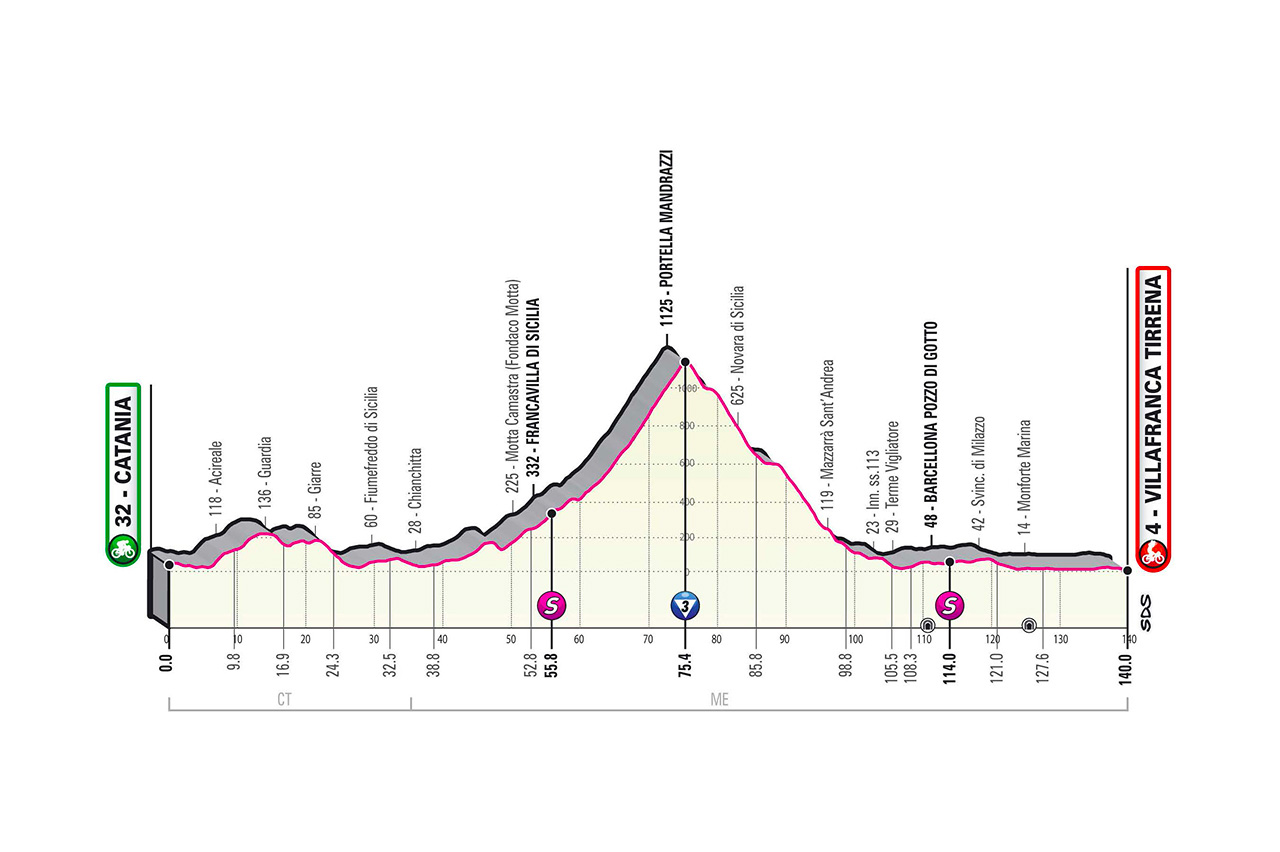 The first part of the route runs along the Mediterranean coast. The route moves through Chianchitta before turning inland at kilometre 38, just before the stunning beautiful town of Taormina. 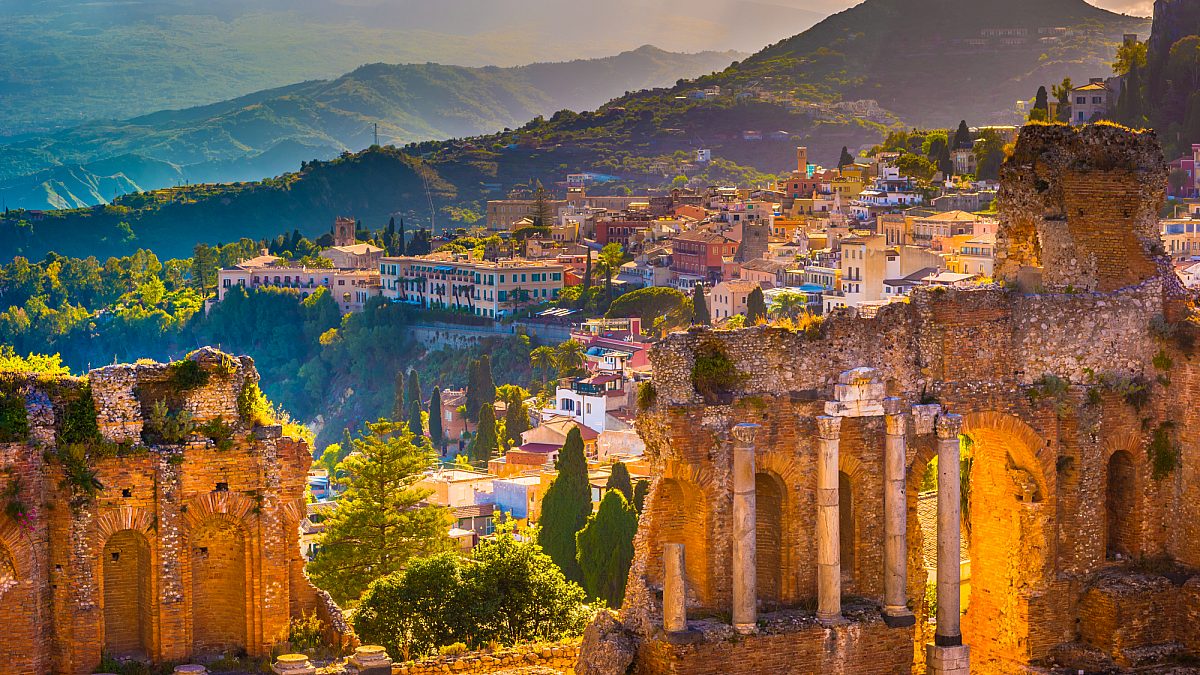 Slowly but surely the riders approach the only climb of the day, the Portella Mandrazzi. The ascent is 19.5 kilometres long and the average gradient hovers around 4%. The summit is crested at an elevation of 1,125 metres. 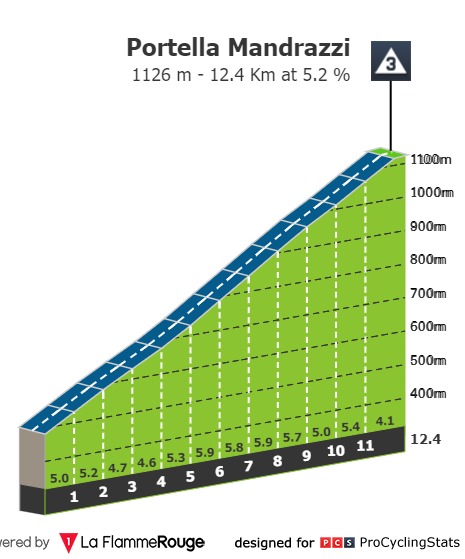 The top however is at 65 km to go, with a long descent to come and an even longer flat stretch. The descent is 25 km long, very fast with wide roads. After that, the final 40 km are all flat, with the last 20 directly along the coast. 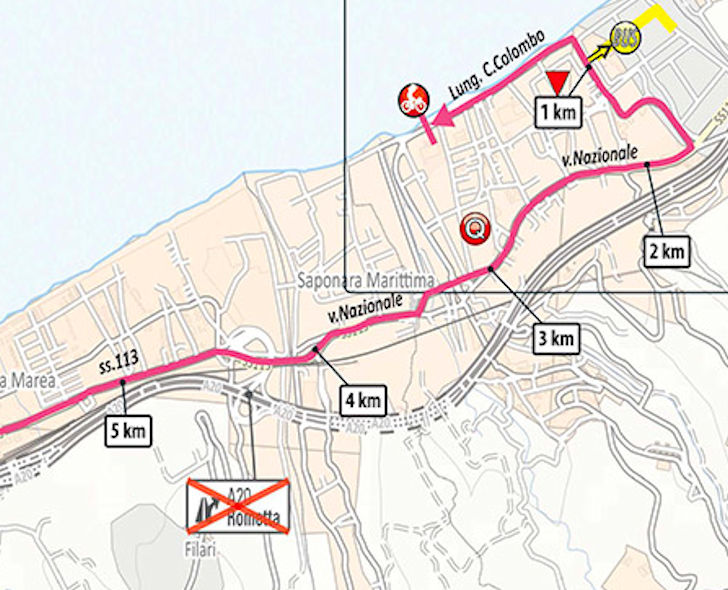 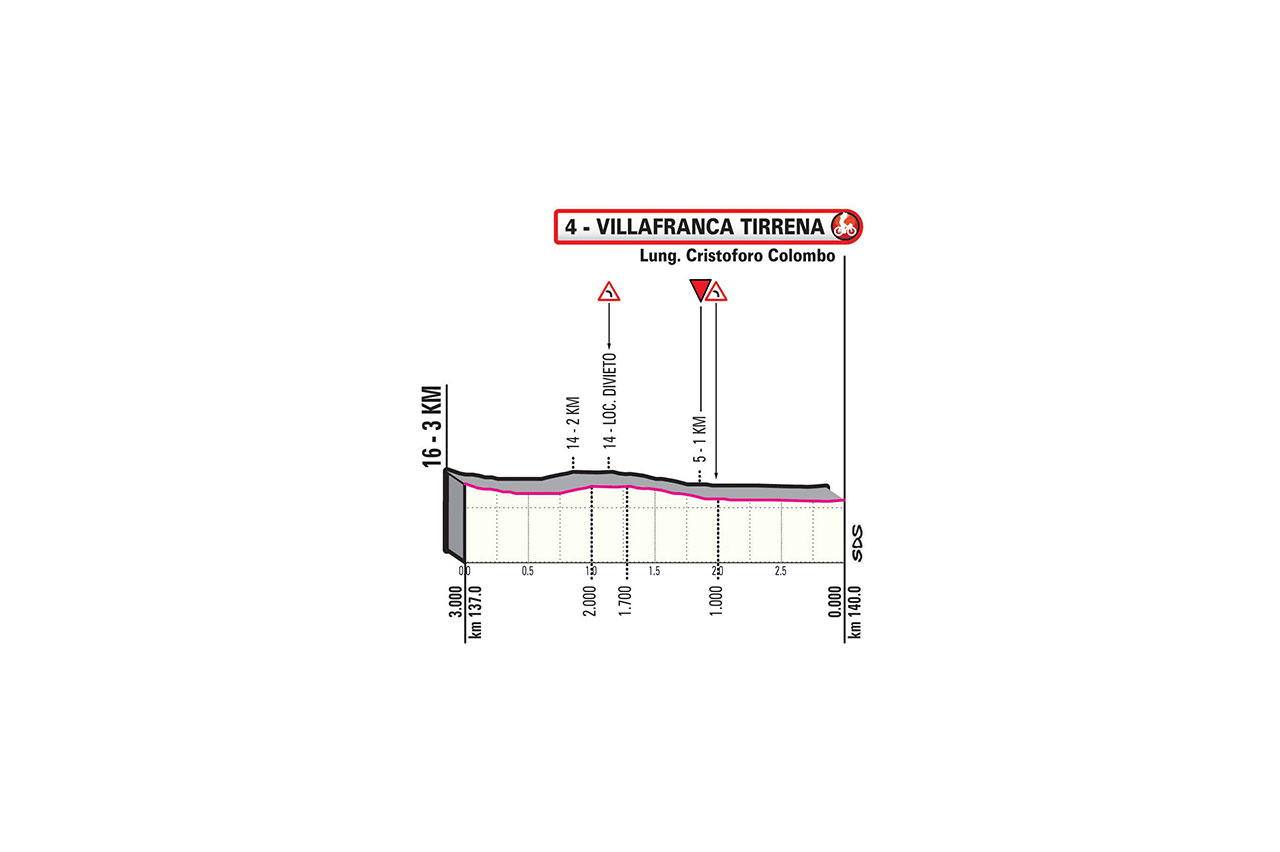 This should be a good breakaway stage, with the climb right in the middle the sprinters’ teams won’t be able to push on. If the likes of Sagan or Matthews wants the stage win however, some pure sprinter might get into trouble. There is also some chance of wind in the final section of course.

Catania is located on the east coast of the main Italian island, Sicily. The city is located on a plain, located between the Ionian Sea and the slopes of majestic Etna, the largest active volcano in Europe, a Unesco World Heritage Site.
In the second half of the nineteenth century, the City expanded beyond the historic Baroque center and new residential neighborhoods were created: the boulevard Regina Margherita and the course Italy, where beautiful Liberty-style villas arose.

The city is currently inhabited by about 300,000 people. 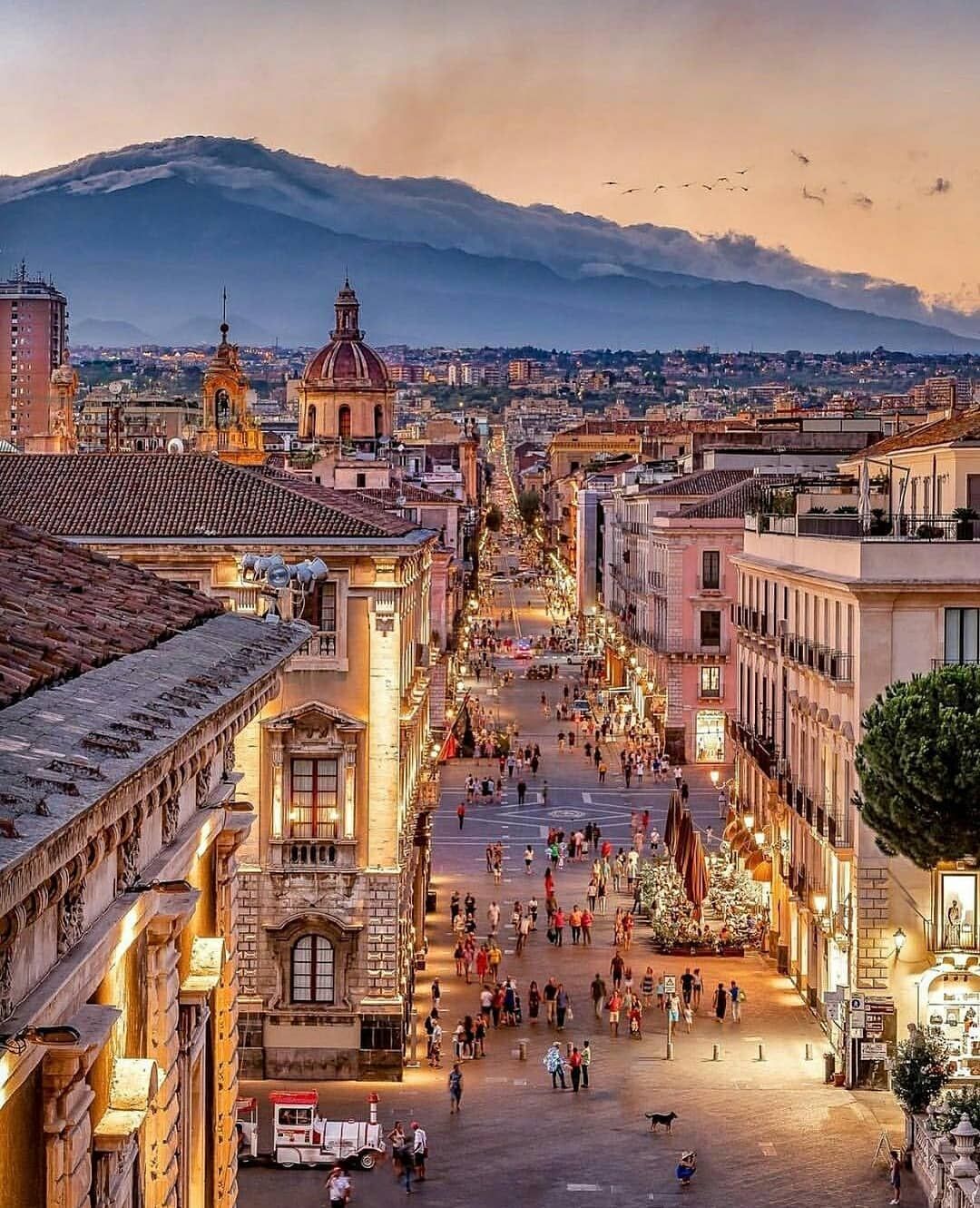 Catania cuisine is one of the richest and tastiest in Sicily.

The great richness and ease in the redevelopment of raw materials and the love for “flavorful” cuisine, combined with the culinary contaminations fruit of the numerous foreign dominations over the centuries, make Catania a gastronomic reference point of the island.

Among the first dishes deserves the place of honor pasta alla Norma, which takes its name from a Celtic masterpiece by Vincenzo Bellini: tomato sauce, fried egg, basil and abundant grated salted ricotta.

Other notable dishes are pasta with cuttlefish black, topped with a sauce prepared with tomato extract, cuttlefish and black of these tasty shellfish; pasta with masculini (fresh anicies in a sautéed onion, peas and fennel rizzu); pasta’ ncaciata, seasoned with cauliflower cooked in an onion pan and seasoned with salted anchovies, olives and caciocavallo.

Meat and fish are served everywhere, with a fondness in the capital for horse-meat, often accompanied by side dishes that, in reality, are real unique dishes:

The rotisserie is one of the most renowned in Italy. The main pieces are the Arancini, crispy squabpy rice-filled, Siciliana (thin puff pastry filled with tuma and anchovies), salted crispelles (sweet dough pancakes, stuffed with fresh ricotta or anchovies), the shaded ones ( made with bread dough stuffed with plenty of tuma and anchovies, or vegetables, or cauliflower, baked).

Typical desserts are ricotta Cannoli, Sicilian Cassata, but above all marten fruit or real pasta (soft almond-based pasta with multiple forms of colored fruit); rice-crystals or traditional “olivette di Sant’Agata”. The famous ice creams and Granita (tossed on demand with hand-crafted cream). Among the latter the most popular flavors are almond, lemon, coffee, chocolate, mulberry, peach. 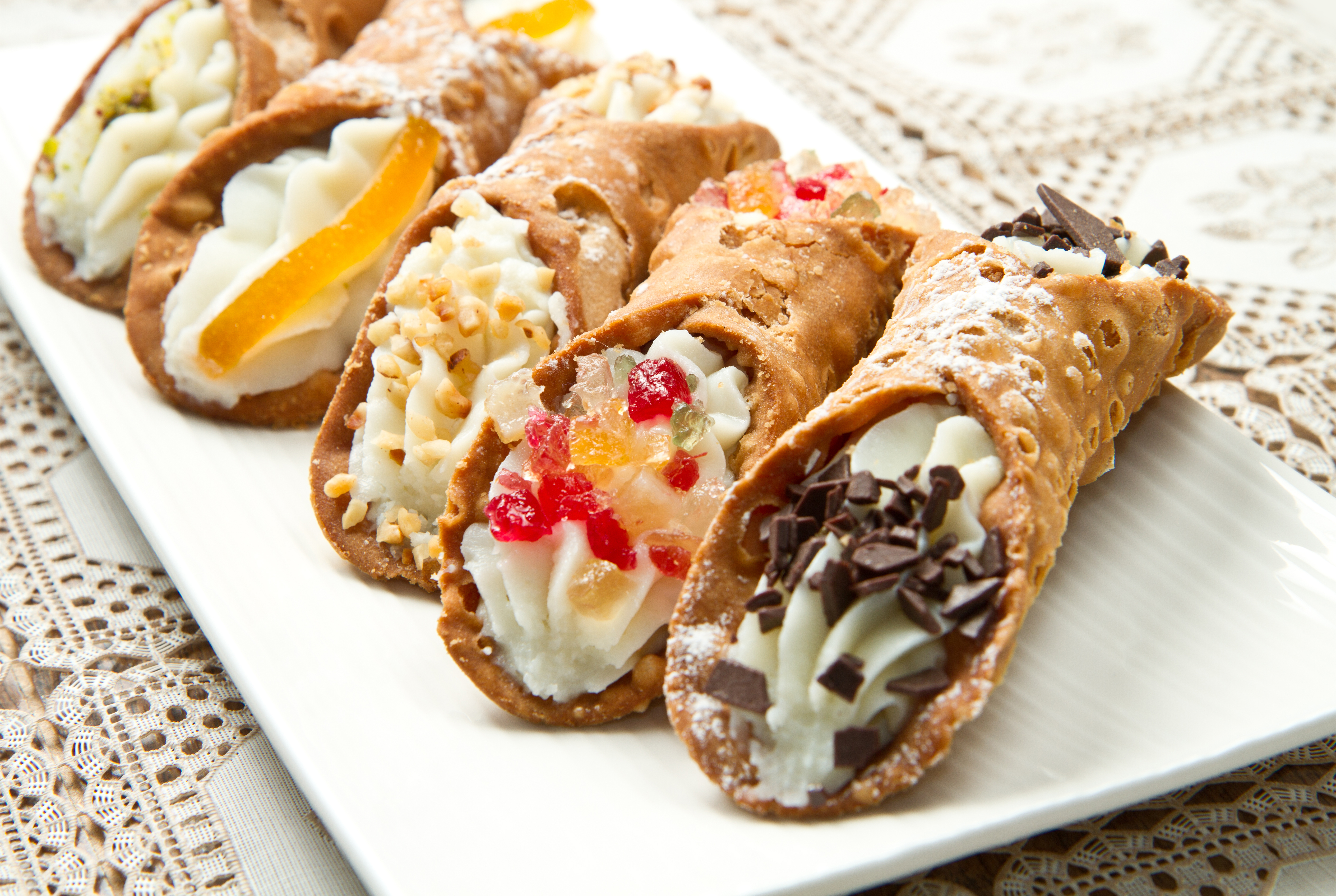 The most representative wines on the territory of Catalonia are, without a doubt, those that are produced on Mount Etna.
The Volcano gives the wines characteristics of minerality and great elegance, due to the strong thermal excursions between day and night and the peculiar pedoclimatic conditions.
“Mountain” wines at particular latitudes, on an island famous for the large number of hours of sunshine during the year: this is the great richness of volcanic wines, along with soils rich in variegated mineral components.
It is on Mount Etna that they have been cultivated for hundreds of years, with the traditional tree vine, the Nerello Mascalese, the Nerello Cappuccio, the Carricante, the Minnella and the Catarratto, all vines that contribute to the production of wines classified as Etna Doc, on all slopes of the Volcano. 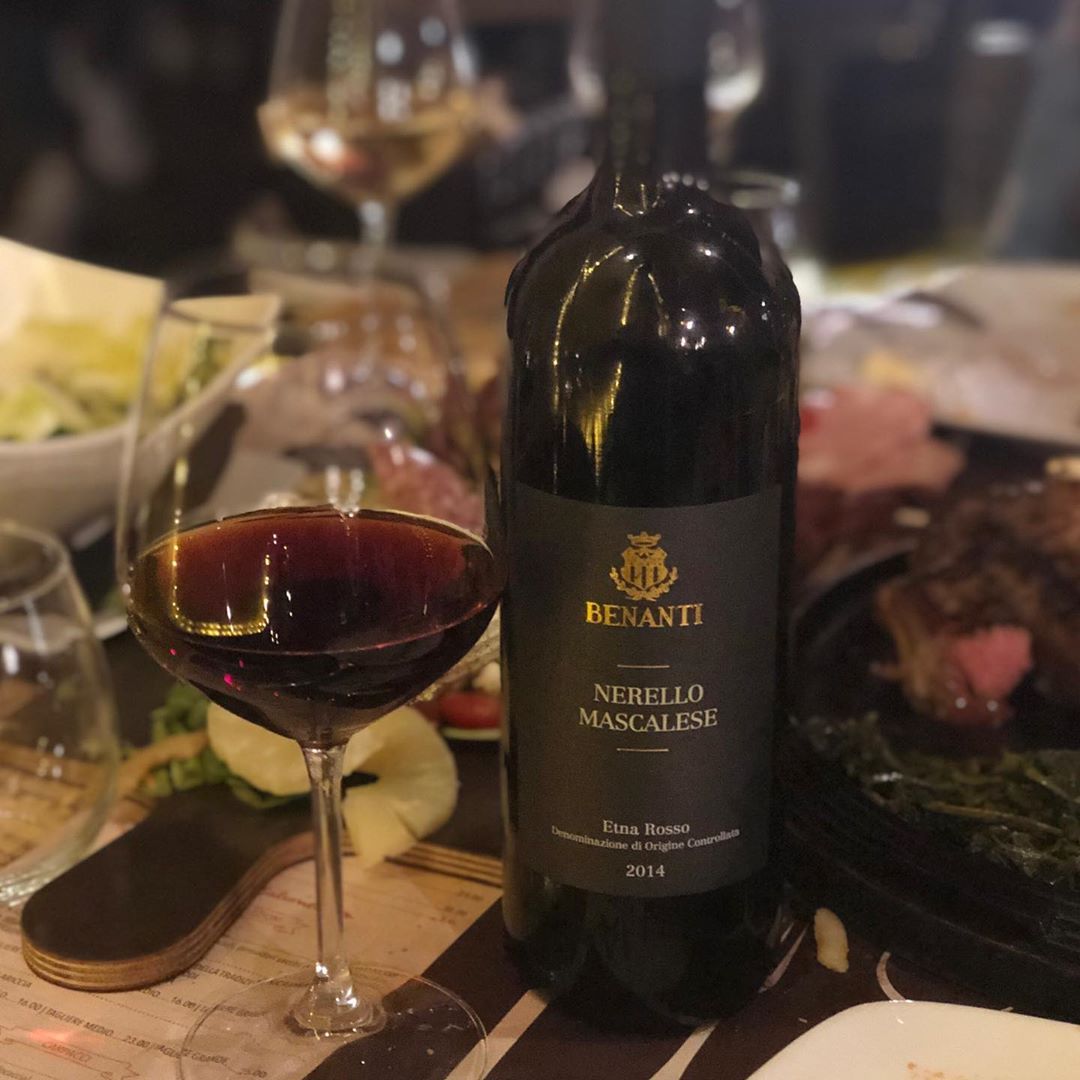 It rises almost to the extreme eastern tip of Sicily a few kilometers from Messina, extending from the Tyrrhenian coast to the slopes of the adjacent hills where we find the villages of Serro and Calvaruso. Thanks to the geographical position, the excellent road and rail connections and the logistical possibilities it enjoys, the town is a perfect destination for those who love to enrich their stay from a cultural and naturalistic point of view.