The Tour de France presents an interesting concept in stage 15. Starting in Lyon, the race runs to the Grand Colombier to tackle the pass in the Jura mountains from three different sides.

The route is 175 kilometres long and, obviously, the race finishes atop the Grand Colombier. The final climb of the mountain, the one where it won’t be possible to hide will start in Culoz. The battle promises to be intense on the eve of the second rest day! 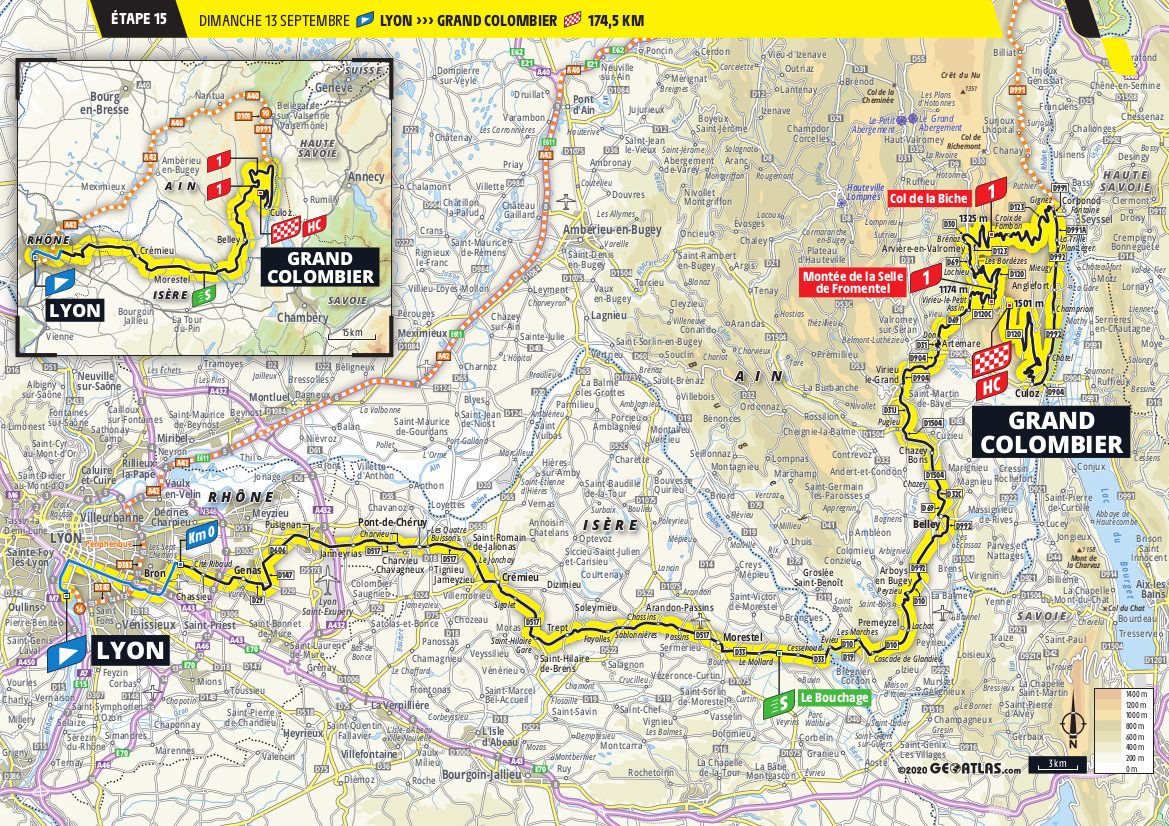 Climbing the same mountain several times, it is not very common on the Tour, although not entirely new. The 18th stage of the 2013 Tour of France tackled the climb to Alpe d’Huez twice. On the 13th of September three of the four access roads up the Grand Colombier will be covered. The last ascent goes all the way to the summit, which will be a first for the Tour.

The first part of the race is nothing special. On rolling roads the riders travel east until hitting the Montée de la Selle de Fromentel with 57 kilometres remaining.
Amounting to 11.1 kilometres at 8.1%, the climb hold its trump cards up its sleeve until the last three kilometres. Respectively, these go up at 11.5%, 14.5% and 12.5% – on average!
The riders plunge down into the valley and shortly the Col de la Biche appears. The first kilometres are nothing special, but the Col de la Biche bares its teeth after 3 kilometres. The actual climb is 6.9 kilometres long and the average gradient sits at 8.9%. The middle section is toughest with double digit gradients for 2 relentless kilometres. 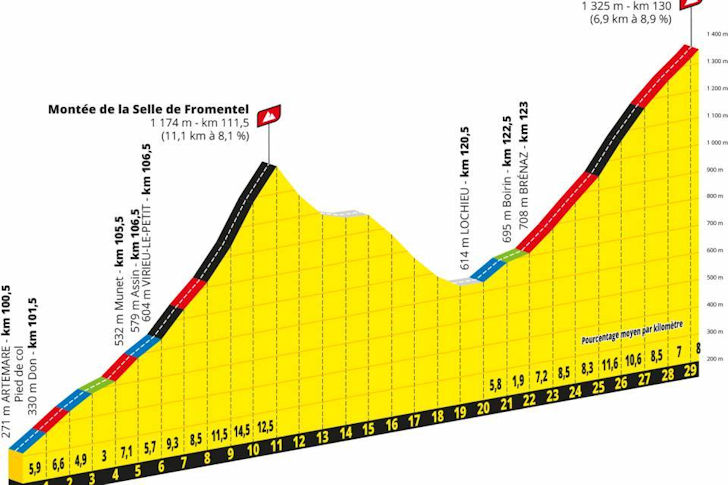 With the preliminary climbs of the race done we should be able to pinpoint whether or not the stage winner is part of the breakaway. If the gap is big enough, yes, but when the GC riders are approaching rapidly the Grand Colombier stage could easily turn into a huge battle for the yellow jersey. Whatever the scenario, the finish climb is going to be brutal.
The last ascent goes all the way to the top of the Grand Colombier. The haul up begins in Culoz and amounts to 17.4 kilometres, in which the riders conquer an elevation gain of 1,244 metres. The average slope is 7.1% with some stretches peaking out to 12%. The last 400 metres are especially interesting as this section rises at 10%. 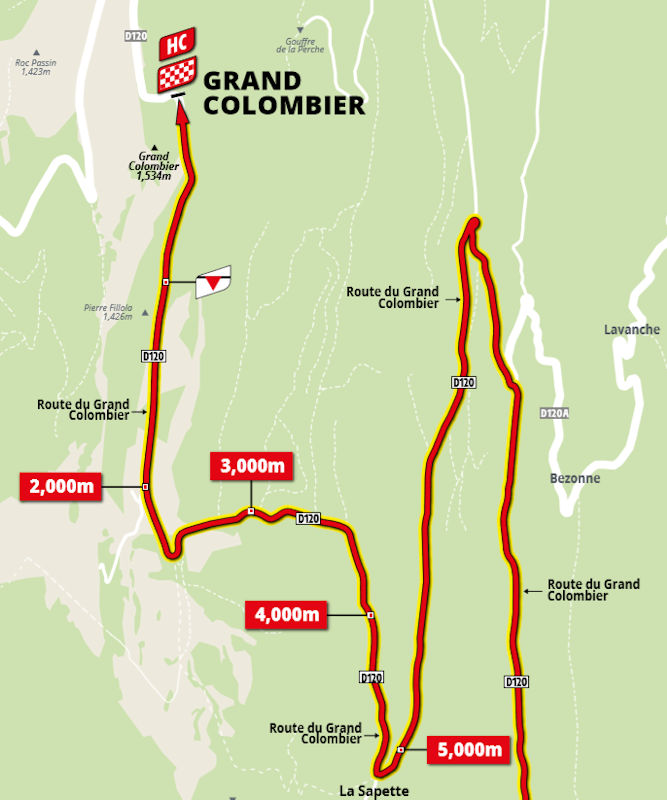 Thibaut Pinot and Primoz Roglic climbed to victory on these slopes in the Tour de l’Ain of 2019 (Pinot) and 2020 (Roglic).
The race to the Grand Colombier will be a strong indicator of the contenders to wear the yellow jersey into Paris. So what about Thibaut Pinot. Is he going to put his loss in the GC to good use on a mountain he loves?

No previous stage, site visited four times in the course of a stage.

Tackled for the first time by the Tour de France in 2012 after being for a long time the main ascent in the Tour de l’Ain, Grand Colombier is about to become a classic climb of the Tour, especially after this first finish at the top. Considered as one of the most difficult climbs in France, it was reached in the front by Thomas Voeckler in 2012, Rafal Majka in 2016 and by Warren Barguil in 2017. Peaking at 1,501 metres, it has always crowned the future winner of the KOM jersey. Five stages of the Tour de l’Ain finished at the top of Grand Colombier, the last two won by Frenchman Thibaut Pinot in 2011 and 2019. The first summit finish was held in the 1980 Tour de l’Avenir, and was won by Russian legend Sergei Soukhoroutchenkov. 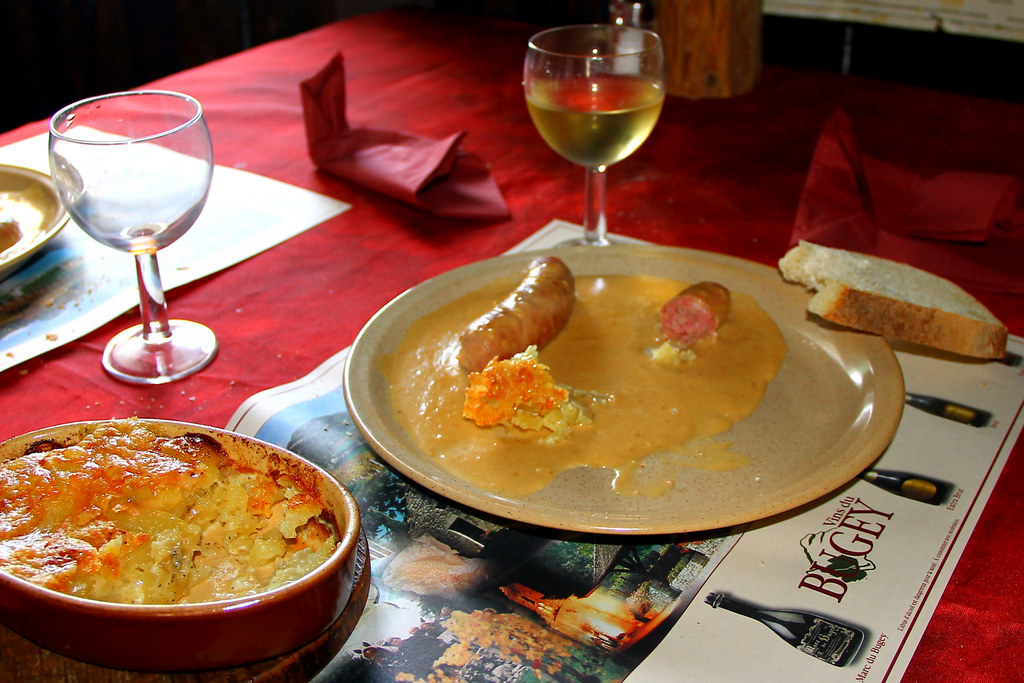 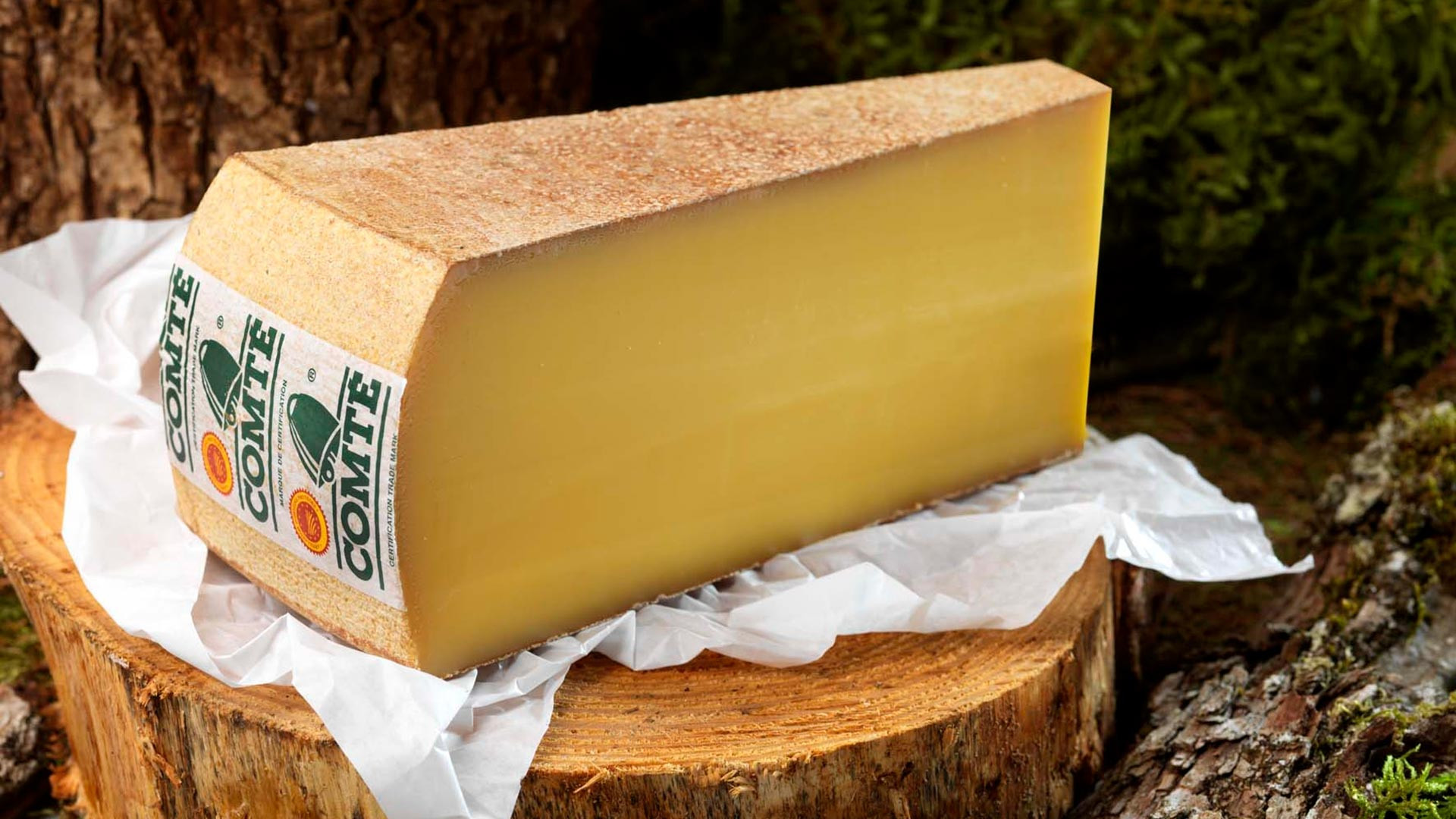