angry_bird Posts: 3,785
May 2017 edited May 2017 in Your road bikes
Unfortunately my CAAD 10 picked up one too many dents and in my latest crash sustained a rather big one to the skinny little seat stay, realistically it's probably best not ridden anymore given a failure there could be very nasty indeed. LBS and the insurance company agreed.

Insurance covered the damage thankfully and although I'd have loved a CAAD 12 frame it seems near impossible to find a non-disc frameset and the shoppy don't deal in Cannönadalés. So eventually settled on an Aithein, reason being I was wanting metal rather than plastic to race on and anything but a BB30.

After initial concerns about not being able to get an orange frame (I wasn't too keen on another anodised black bike) the shop apparently managed to get lucky over the phone and bag me an orange one while trying to find me a kinesis seat post from the distributor. Apparently they were out of stock in both, the post it turns out has come as ex display so was cheap cheap cheap and the frame they had one lying around so winning there too. 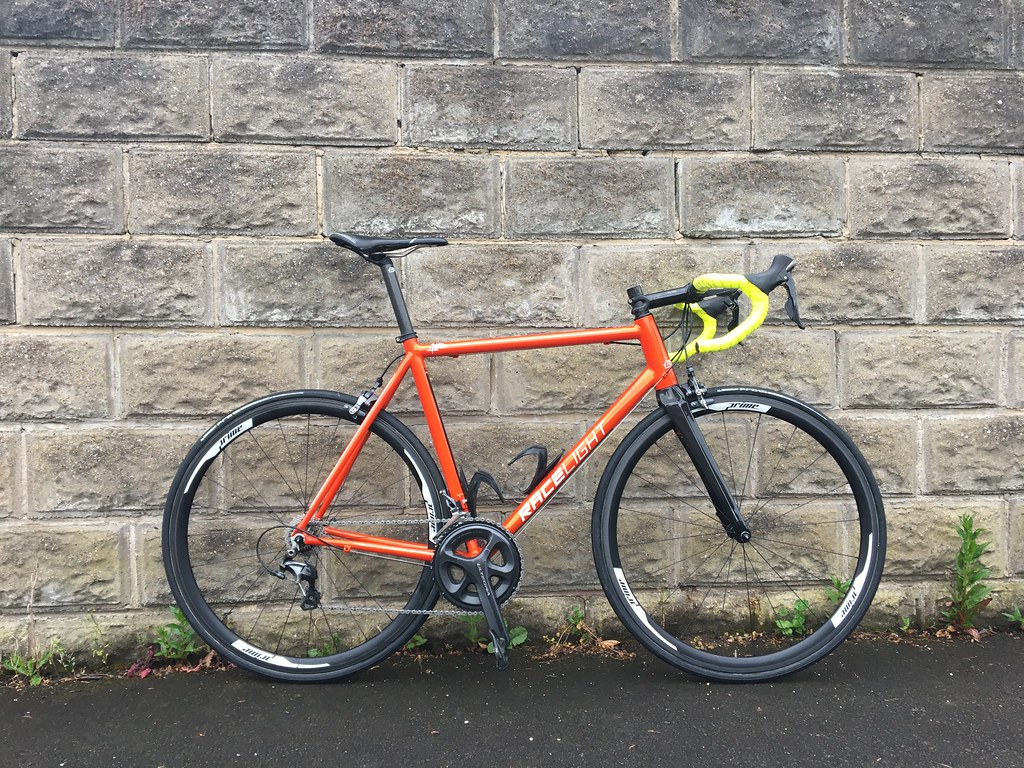 Was initially planning on getting some DT tubs, some of the new ones that are on the way out in collaboration with Swissside I think but the price was prohibitive unfortunately so we decided eBay was probably a better route. In the end I chickened on eBay and went with some Prime wheels from CRC (I know, but for the price they were hard to beat). Ultimately what I've saved on wheels will end up going back into the shop on the bike I'm building for the the GDMBR next year, plus probably a bike for the GF too :roll:

Aithein 56cm frame
Ultra 6800 Groupy
Storck RBC 220 Bars
3T Team 130mm Stem
Kinesis seatpost
Selle Italia SLR Flow saddle
Prime 35mm Carbon Tub wheels with Michelin Pro 4s.
Fizik glossy/hi-viz yellow tape (to be swapped at some point for black- I have about half a dozen rolls of it lying around so thought I'd use it, it was either this, pink or brown for now :shock: )

Weighs in at... 7.2kg which surprised me, wondered if it was right so compared against the Storck which I know (based on work's expensive medical fancy scales) is 7.29kg and today weighed in at 7.3kg. So I'm assuming it's an accurate weight. Pretty happy with that.

To ride it's definitely different from the CAAD. It's stiffer and a little harsher. Hard to explain, but feels more like an aero carbon bike in terms of comfort if that makes sense? It's sharp though. Snappy handling, power transfer feels efficient. As for the wheels. They're light and that tells. Compared to the Zipps they brake better in the wet (with the Prime supplied pads, I've not tried them with the SwissStops yet to really see what the difference is) and they flex less. Oh, and the RRP is £1k cheaper...
Angry Bird's offroad bikes
Winter
Racey
Special Favourite

If in doubt, blame Wiggle.
0