When I started cycling seriously back in 1993, MBUK magazine was always full of photos of exotic XTR-equipped Cannondales, all sporting some kind of wacky innovation (1.5in headset, cantilevered rear drop-outs, Headshok, -20deg stem, Delta V, etc.) which were a world away from my Altus C30-equipped Cro-Mo steel GT Talera. The thing I remember of those bikes was the paint jobs that the more expensive models were finished in. I’ve wanted a Cannondale ever since and spent the next 20 years watching them invent new things such as the Raven, the Lefty, the Scalpel and, less good in my opinion, the clever but creaky BB30. Nowadays I don’t have much time to go mountain biking so couldn’t justify a new mountain bike so instead a couple of years ago, bought a CAAD12 frame to build up. It’s got a few Cannondale quirks, like the random BB30a bottom bracket standard, 25.2mm seatpost and post-mount front caliper yet flat mount rear but apart from these the bike is superb in all aspects. I tried to give it a 90s flavour with purple anodised parts (link), but it looked wrong and I’ve since changed it to a more ninja black and very very dark grey style.

I still wanted a 90s-look Cannondale and despite already owning a winter and a summer bike wanted a niche ‘in-between’ fast road bike that I could use in damp conditions in the summer and drier conditions in the winter but that had a more aggressive position than my usual winter bike. The brief to myself therefore was retro-looking frame, hydraulic discs, Di2 and absolutely as cheap as possible - Kind of an old-look but with new tech / bits, a bit like what Chevy did with that yellow Camaro in the Transformers film.

I started looking for bits in 2019 and eventually won this tired looking but otherwise okay 2016 58cm CAAD Optimo frame on eBay. To my amazement it came with decent 105 front and rear mechs, a knackered but sellable chainset, rear caliper and mismatched forks. 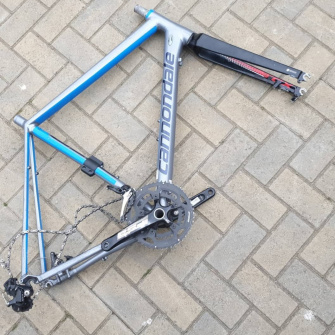 As I wanted Di2 and hydraulics, I sold all the components and the fork that came with the frame and netted myself a decent profit – result! With this profit I bought a new set of bearings and Hylix tapered road disc fork. I chose this fork as it was the only one I could find that had all-carbon construction, tapered steerer, post brake mount and eyelets for mudguards (even the one at the crown). Thus far the project had cost me nothing but time. 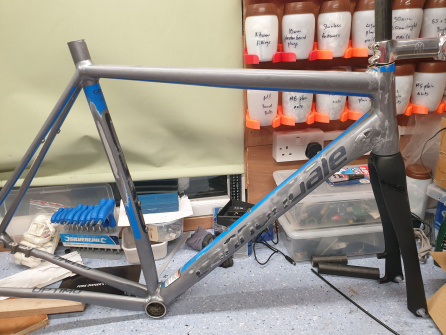